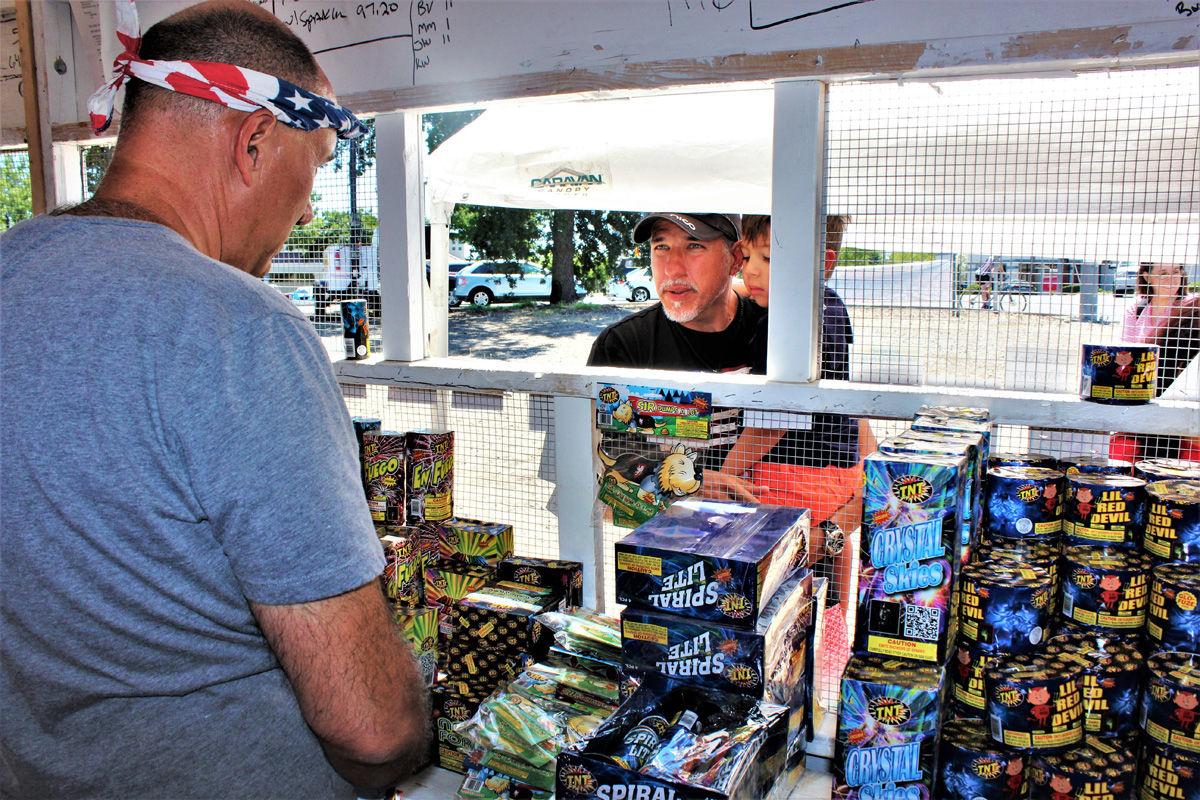 Firework stands open for business in Galt on June 28. 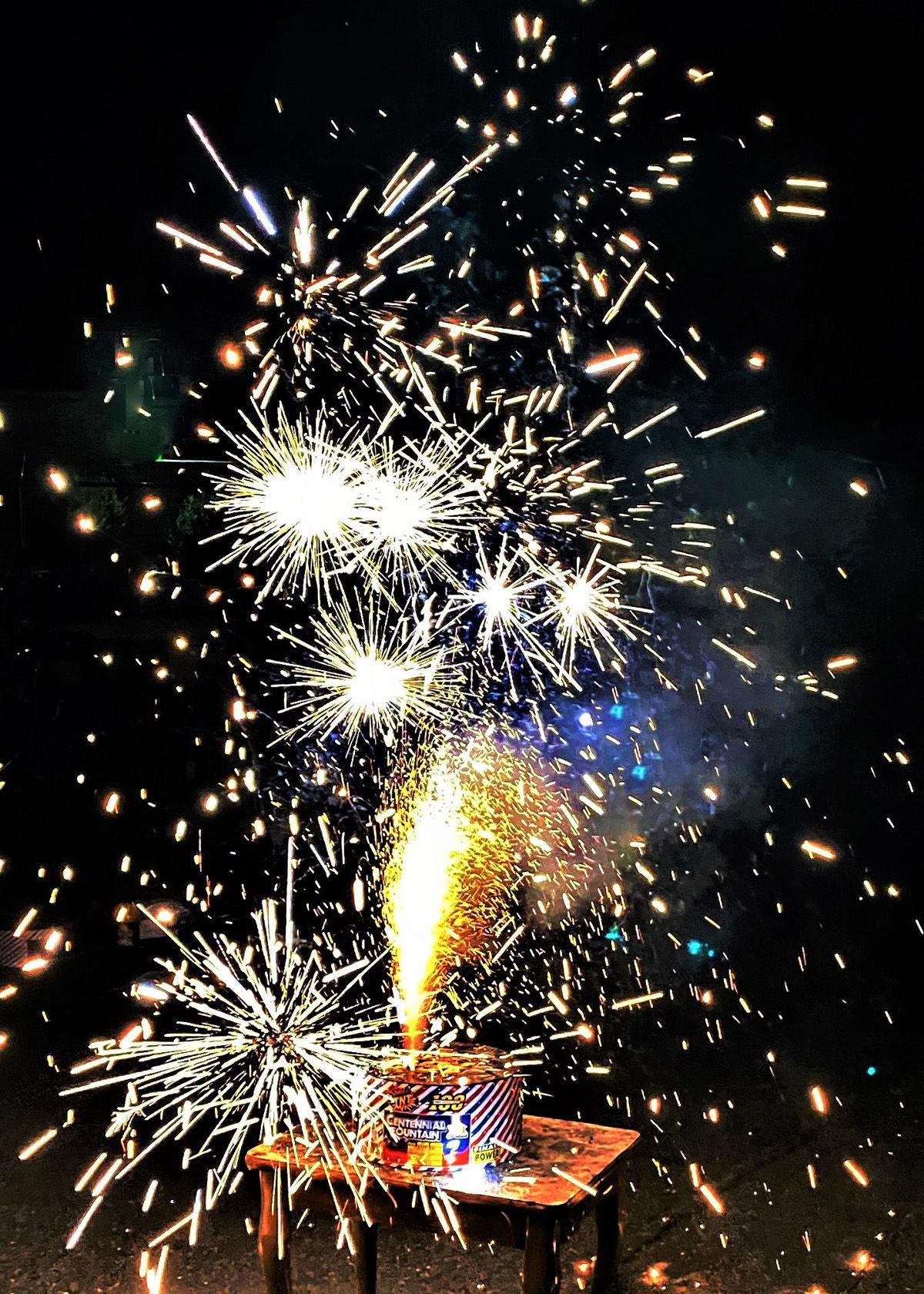 Some of the fountains make up a strong 2020 freshman class.

Firework stands open for business in Galt on June 28.

Some of the fountains make up a strong 2020 freshman class.

Galt’s two major fireworks distributors – market-dominating TNT and Phantom – are going big this season in hopes to release the inner Uncle Sam and Lady Liberty from within a population feeling blue over a topsy-turvy world dealing with a pandemic and pandemonium.

Believing that the joy of fireworks will help shake the blues by adding red and white in honor of America’s 244th birthday, these companies, along with Discount Fireworks Superstore with stands as close as Elk Grove, are rolling out a record 24 new fireworks in the Golden State this season – nearly double the previous mark.

The 2020 freshman class also includes one new limited-edition assortment, and never has there been more buy one get one free and mix and match deals to woo buyers.

That’s a lot of shapes, sizes, colors and prices among the rookie lineup, and while variety usually bodes well for fundraising nonprofits running the stands, perplexed consumers will ponder the obvious questions: What’s new? What’s loud? What’s unique? How long does it last? What gives me the most bang for my buck?

Help has arrived. Our annual and unbiased fireworks buyers guide has reviews of the new items and the very best of the returning rest. For the 19th year, new fireworks are graded on a 5-star scale, judged on performance, duration, distinctiveness and value. Promotions are noted where applicable.

Every Phantom firework this season is a buy one, get one; the freebie can be the same item or any firework of like or lesser price. TNT is countering with its own mix-and-match deals plus limited-edition items in commemoration of the company’s centennial anniversary of selling fireworks. DFS, which TNT took over in California last year, save for a handful of locations up in the Redwood Coast, tends to have lower prices overall and a wider range of brands.

A star-spangled shout-out to the Sacramento Fire Department for cooperation with this season’s test. Special thanks to Fire Marshal Jason Lee and Capt. Keith Wade.

Centennial Fountain XL (TNT), $60 – Burn time is shorter than most 500-gram finales at this price point, but this special edition fountain proves that duration is sometimes overrated. Wows with a mesmerizing mélange of effects and medley of transitions – droplets to fish to crackle to birthday cake to a shock-and-awe eruption. Here for this season only. 80 seconds. 4 Stars

Living the Dream (TNT), $49.99 – Like ordering TNT’s exquisitely named Wild Side (see Best of the Rest) and saying, “make it a double.” 500 grams get you two awesome minutes of super-charged crackles, though at a dear price. 120 seconds. 4 Stars

Flower Patch Kids (TNT), $40 for two – The first few seconds are absolutely gorgeous with deep red droplets that produce the prettiest start of any California firework. The rest of the flowers in this patch aren’t nearly as beautiful. 77 seconds. 2 1/2 Stars

Take a Hit (TNT), $40 for two – Love the rarely seen lavender droplets and nice palms, but this batter got two bases on a bloop single and error. 75 seconds. 2 Stars

Jungle Flower (TNT), $39.99 – The intense crackle and vivid colors are pleasing. Just wished it had a more exciting overall and longer performance for the price. 49 seconds. 3 Stars

Revolution (TNT), $30 for two – You say you want a revolution? Not sure even Paul and Ringo would want this disappointingly short newcomer despite loud three whistles and crackling pink and blue sparks. 34 seconds. 2 Stars

Flower Pot Fountain (Phantom), $29.99 for two – Low-noise fountain enthralls with multicolored droplets against a near-constant shower of silver glitter. Use of blob-producing nitrocellulose reduces burn time. Worth it. 52 seconds. 4 Stars

Electric Manipulation Fountain (Phantom), $21.99 for two – What’s dubbed as a “silky blue explosion” in the second half makes up for an unimpressive opening of standard crackles and colors. 53 seconds. 3 Stars

Sparkle Berry (TNT), $19.99 – Cavalcade of color changes to crackling frenzy after a piercing whistle at the 40-second mark. 65 seconds. 3 Stars

Old Glory (DFS), $15.38 for two – Veteran TNT fountain debuts in California rebranded as a Freedom item. Colorful and crackly, but there’s better out there. 49 seconds. 2 Stars

Kool Kat (TNT), $9 for two – Billed as a new firework, it’s actually a rewrap of Cool Breeze that debuted last season and is being sold at closeout prices (see “Best of the Rest” section). 43 seconds. 2 Stars

Tornado Ground Spinner (Phantom), $3.99 for two packages of 6 – Spinning novelty sounds like fun, but if using the Enhanced Fujita Scale for tornadoes, this cyclone gets a rating of EF0. Buy a pack of ground bloom flowers instead. 3 seconds. 1 Star

Also new for 2020 … Centennial Assortment (TNT), $110.99 – The only new state-approved assortment this season features 15 respectable fountains named after oldies but goodies and clad in retro labels. Limited-time item commemorates the 100th year of fireworks sold by the Alabama-based company that would become TNT. Best in the box: Big Bomb, Freedom, Red Devil, and Ace fountains. 4 Stars

Best of the Rest

Red White & Blue Jubilee (Phantom), $29.99 for two – Promised blue is more like purple, which is often the case due to the high cost of blue-producing copper compounds. Still delights with white chrysanthemums, and red and bluish fish and pearls. 110 seconds.

Wild Side (TNT), $25.99 – Like watching the super-charged final half-minute of TNT’s Opening Show for a full minute. No climax because it’s all climax. 60 seconds.

Retro (DFS), $20.49 – “Best in Show” winner for the second straight year. Last season’s double honoree – it was also named “Best New Fountain” – is perhaps the most exciting one minute in fountains ever. Crackling sparks push the state’s legal limit of 10 feet high and wide like never seen at this price. 58 seconds.

Main Squeeze (TNT), $17.99 – Rookie sensation from last season gets a label makeover. Costs $3 more, but still worth it thanks to insane sparks at the 1-minute mark. 83 seconds.

Cool Breeze (TNT), $1.50 – With a 70 percent price drop, this pint-sized powerhouse packed with crackle, color and longevity goes out with a bang in its final season. Tested same as Kool Kat (see review under “New for 2020”). 43 seconds.

For stand locations and additional product information, visit the retailers’ websites: TNT, tntfireworks.com; Phantom, fireworks.com; and Discount Fireworks Superstore, dfsfireworks.com. Galt is an “open” community for consumer fireworks, but it’s always wise to check local laws and take all safety measures before buying and lighting. See the full list of communities at ca-fireworks.presskit247.com.