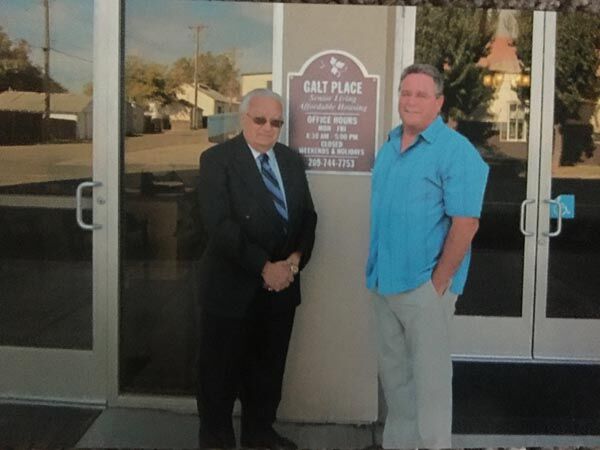 Curt Campion stands with Cyruss Yousseffi, owner-developer of the Galt Place Senior Commercial Project, after its opening debut in 2011. Campion served as the Planning Director at that time, and was intimately involved with the project. 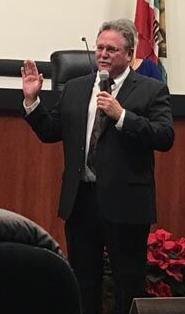 Curt Campion is sworn into office on the Galt City Council in December 2016. Campion was beginning his second four-year term on Council.

Curt Campion stands with Cyruss Yousseffi, owner-developer of the Galt Place Senior Commercial Project, after its opening debut in 2011. Campion served as the Planning Director at that time, and was intimately involved with the project.

Curt Campion is sworn into office on the Galt City Council in December 2016. Campion was beginning his second four-year term on Council.

Councilmember Curt Campion is a matter-of-fact kind of person – no fluff, just a lot of knowledge gained from years of experience. The Councilmember began his connection with the city of Galt decades ago as the first city planner. But that’s not when he began making a difference in the lives of others. Some would say it began at Chico State while he was in college. The city’s Interim City Planner Craig Hoffman is one who has benefited from Campion’s service and determination.

“The amount of people that Curt has touched is just crazy,” Hoffman said. “Curt pushed the college (Chico State) to make a degree program in resource based land management. He crafted a degree so students could go into rural areas and towns and get jobs. To say that Curt was influential in my life is an understatement.”

The degree program Campion created is still in place today at Chico State. With Campion’s help, Hoffman went on to be the first planning intern for the city of Galt.

“It was an opportunity to gain real world experience in a profession I wanted to work in,” Hoffman said. “(The) internship lasted for three months. Everyone was really supportive. They tried to help me understand what it was really like to work in a Community Development Department – what the work really entailed. It made a lot of the college courses make more sense.”

Campion didn’t wait to finish his degree before jumping into city management and politics. While living in Paradise, east of Chico, Campion served on Paradise’s planning commission. He was later elected to the Paradise Town Council, including a stint as mayor until taking a job with the city of Galt.

According to City Clerk Tina Hubert, Campion started as an assistant manager/city planner in July 1985. He went on to serve as the community development director in 2005. After retirement in 2011, Campion became a Councilmember in 2012. His eight-year commitment as a council member will conclude in December.

Campion has seen a lot of changes since 1985 in Galt and, indeed, was instrumental in most of them. While employed with the city, he wrote and championed a grant request with the Sacramento Area Council of Governments (SACOG), which awarded the city a $2 million grant. The Highway 99 overpasses at A and C streets were constructed with that grant.

As a city council member, he’s never been shy to voice concerns or argue for what he believes is right for the city and the citizens of Galt.

Chris Erias, former community planning director, was hired by Campion and is thankful for his help.

“Galt is losing a true leader and visionary,” Erias said. “Curt was responsible for shaping much of what Galt looks like today. Curt hired me in 2005 as an associate planner. He took a chance with me, as I had no new growth planning experience. My previous planning experience was in redevelopment. My career success is due, in part, to what he has provided me. I owe Curt a debt of gratitude because, without his taking that chance on me and providing the guidance, mentorship and direction, I would not be in the position I am in today.”

Equally passionate about his family, Campion is a devoted husband, father, grandfather and son-in-law. When his grandchildren came along, he volunteered for babysitting duties. His mother-in-law lives across the street, so both he and his wife Denise can be of help.

Erias said Campion has been more than a good colleague.

“Finally, I appreciate Curt’s friendship,” Erias said. “Since he retired from city work, he and I continued to stay in touch. To this day, we still talk and he continues to provide me the mentorship I need.”