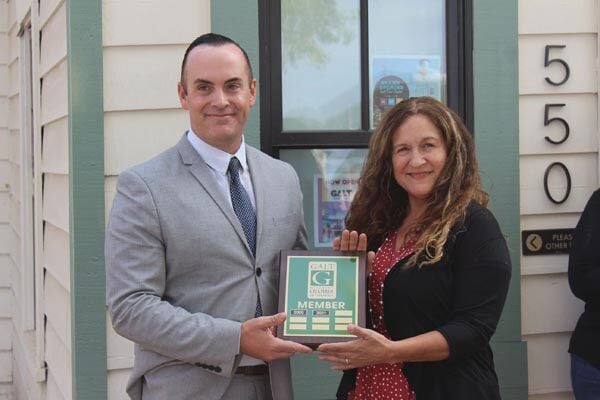 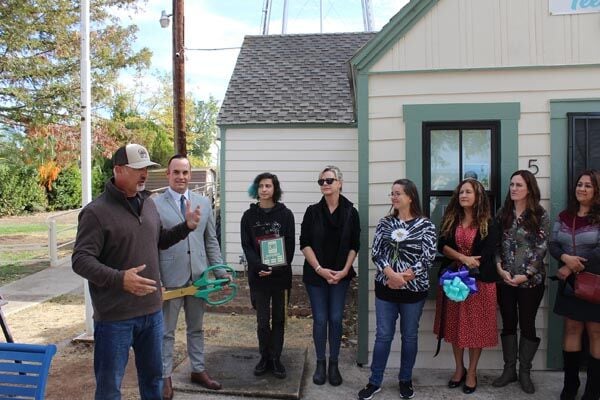 After months of renovations, the Galt Teen Center (GTC) held a ribbon-cutting ceremony on Oct. 21, marking another step toward its grand opening and its goal to provide safe after-school options to the city’s youth.

Teen center President Annette Kunze cut the ribbon — in the black and turquoise of the GTC logo — accompanied by members of the teen center’s board and representatives of the Galt District Chamber of Commerce.

“We’re thrilled to have you guys in the city and here just to help serve the community, help serve teens, give them something to do after school,” Galt District Chamber of Commerce Treasurer Kevin Borges told the board members before the ribbon cutting.

Kunze thanked her fellow board members and the community in a brief speech.

“We’re looking forward to serving all of the teens in Galt who can come out,” she said.

Farmer praised the GTC leadership for their dedication to their project.

“I just want to applaud you guys for taking something that could have easily gotten derailed, and you stuck with it, and you guys persevered,” Farmer said.

The refurbishment of the building formerly rented by the Galt Area Historical Society started in May. The process ranged from giving the building a fresh coat of paint, both outside and inside, to installing new flooring, redoing the bathrooms and bringing in games like a pool table and an air hockey table.

Liberty Ranch High School graduate Eren Felix painted a wooden sign with the GTC logo to hang on the front of the building, and input gathered directly from teens at community workshops helped guide the project.

With all the “immediate” work done, Kunze told the Herald that there are plans for other improvements.

“We applied for a grant to redo the outdoor (area) to make a nice outdoor space for the teens,” Kunze said. In order to make GTC accessible for Liberty Ranch High School students, she imagined developing a transportation system or a bus. As more volunteers join, the goal is to expand operations from two days a week to five.

“But we have done everything that we needed to kind of get the baseline done,” Kunze said.

GTC’s grand opening is scheduled for Nov. 5 at 5 p.m., and Kunze said attendees would be treated to food and to games like cornhole, Connect Four and Jenga.

The center is “hoping to get more people interested and spread the word,” Kunze added, and it seems to be succeeding. At first, GTC was hosting only “one or two” teenagers, but the Tuesday before the ribbon cutting, it welcomed 16.

The Galt Teen Center is located at 550 C Street, and it is open on Tuesdays and Fridays from 3 to 6 p.m. For more information about GTC, visit its website, galtteencenter.org.