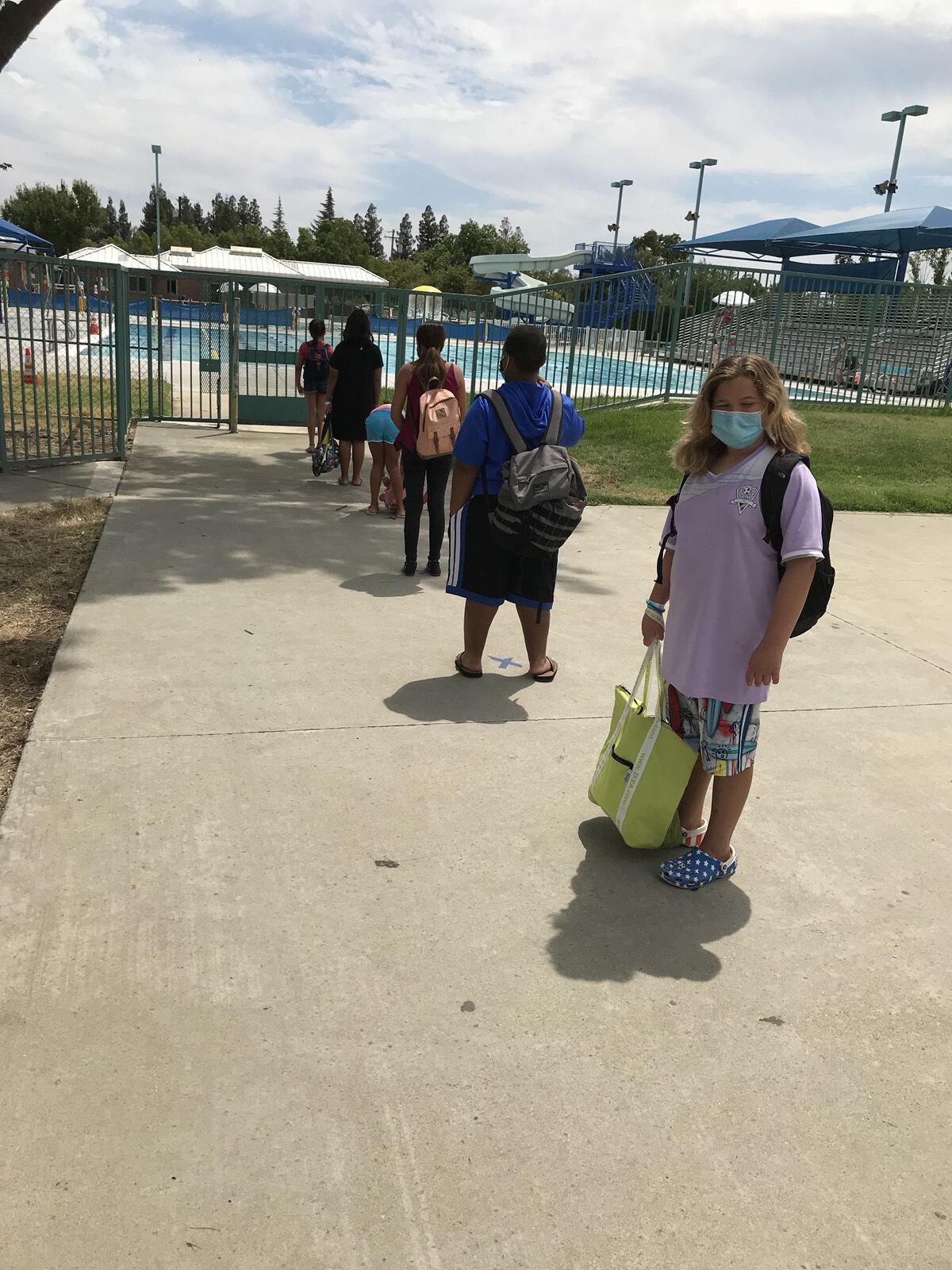 Galts Parks and Recreation’s Camp, Summer SOAR, looks very different this year due to COVID-19. This year’s camp includes trips to the pool and other fun, social distanced, of course. Back to front: Kelsey Hawkins, Elia Rodriguez, Olivia Rodriguez, Gabrielle Guerrero and Camelia Cazares wait for the green light to dive in at the Gora Aquatic Center. 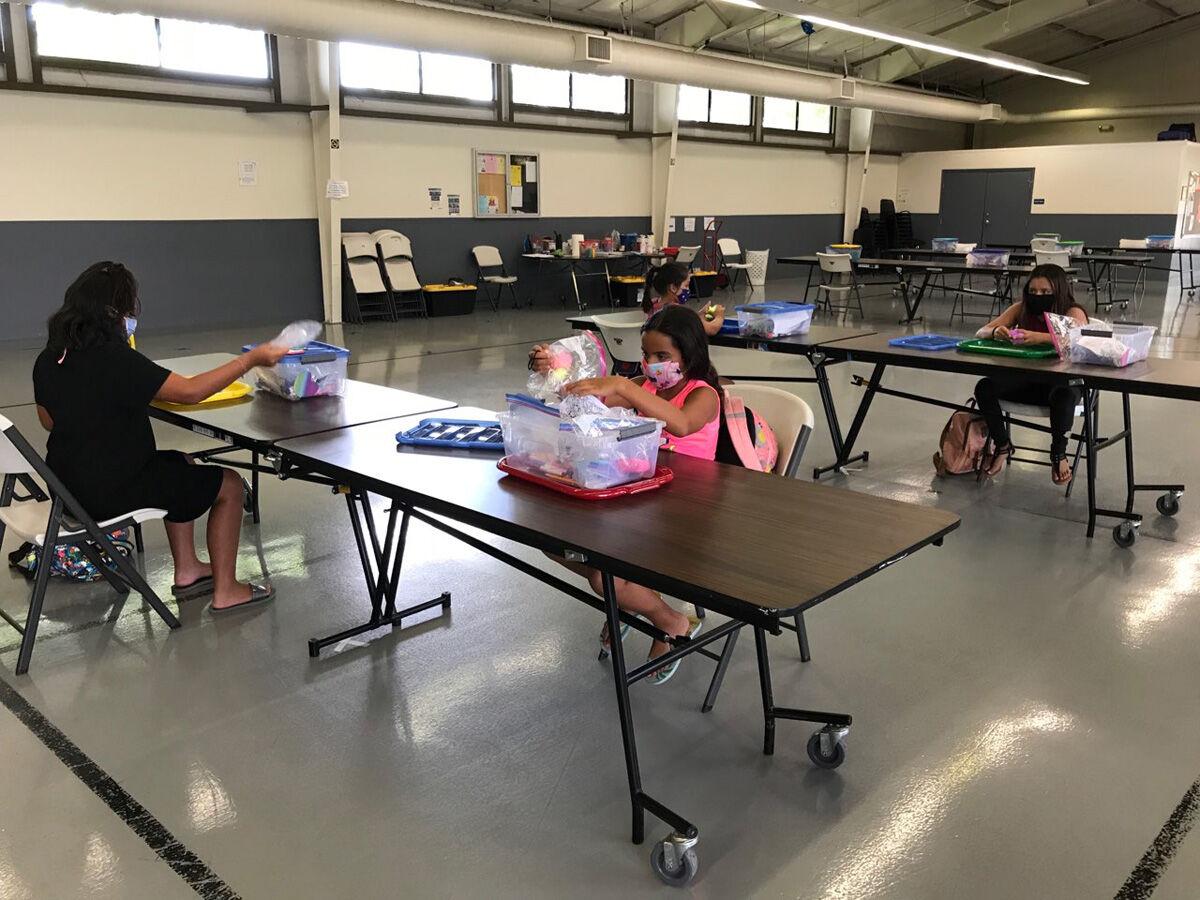 Campers are required to keep social distancing and wear masks.

Galts Parks and Recreation’s Camp, Summer SOAR, looks very different this year due to COVID-19. This year’s camp includes trips to the pool and other fun, social distanced, of course. Back to front: Kelsey Hawkins, Elia Rodriguez, Olivia Rodriguez, Gabrielle Guerrero and Camelia Cazares wait for the green light to dive in at the Gora Aquatic Center.

Campers are required to keep social distancing and wear masks.

In light of COVID-19, Galts Parks and Recreation’s Camp SOAR, or Summer SOAR, looks very different this year. Open to first through sixth grade students, the first of two two-week sessions ran from July 13 to July 24, with the second session currently running from July 27 to Aug. 7.

“They’re a lot quieter,” Galt Parks and Recreation’s Recreation Supervisor Monica Lopez said of this summer’s campers. “They’re sitting six feet apart and they might be doing the same activity, but they’re really doing it on their own. The counselors are trying to get them to dance and do fun stuff, but it’s not like you can walk up to your buddy and pat them on the back or braid your best friend’s hair. You have to keep your distance and respect that, and they’re doing a really good job with that, but it definitely is different.”

In a normal year, the Summer SOAR can accommodate as many as 50 kids and offers a range of options from daily camp to showing up only a few times a week. This year, Summer SOAR was only open to the first 30 kids for each session. Campers were split into three groups of 10, which remained the same for the duration of the camp – no changing groups because you found out your friend was in another. Each group was assigned a different schedule and different drop-off and pick-up spots to ensure they weren’t together at any point throughout the day.

“And that is another COVID guidance that has been provided by the state,” Armando Solis, Director of Galt’s Parks and Recreation Department, clarified. “You have to keep the cohort together. You cannot intermix them because we have to be able to identify a cohort in the case that one of them does get sick.”

With the exception of siblings, who are able to be closer together, kids are assigned a spot at their own table with at least six feet between them. Social distancing expectations are marked on the ground with tape, and activities include lots of independent projects in lieu of group games. Each student receives their own activity box for the session so there is no sharing of supplies or items after they have handled them.

“The kinetic sand, the fuse beads, any of the activities we have planned for the two weeks go into your box and you’re the only one who touches it once the week has started,” Lopez said.

While this was another factor that played into the decision to limit the number of Summer SOAR participants to 30, Lopez said that they already had most of the supplies for the summer and didn’t need to find extra funding to purchase additional supplies in order to ensure kids didn’t have to share.

The students also spend much of their afternoons outside at the Gora Aquatic Center, where they are expected to wear their masks when not in the pool.

“We initially started it years ago because parents needed care during the summer,” Lopez said. Even though Summer SOAR can’t truly serve that function this year, she believes it was still important to continue with a modified program. “I think it’s giving everyone a break in their day. It’s definitely not a daycare in that it’s only four hours, but it’s helping the kids break up their day and it’s giving the parents a little bit of a break.”