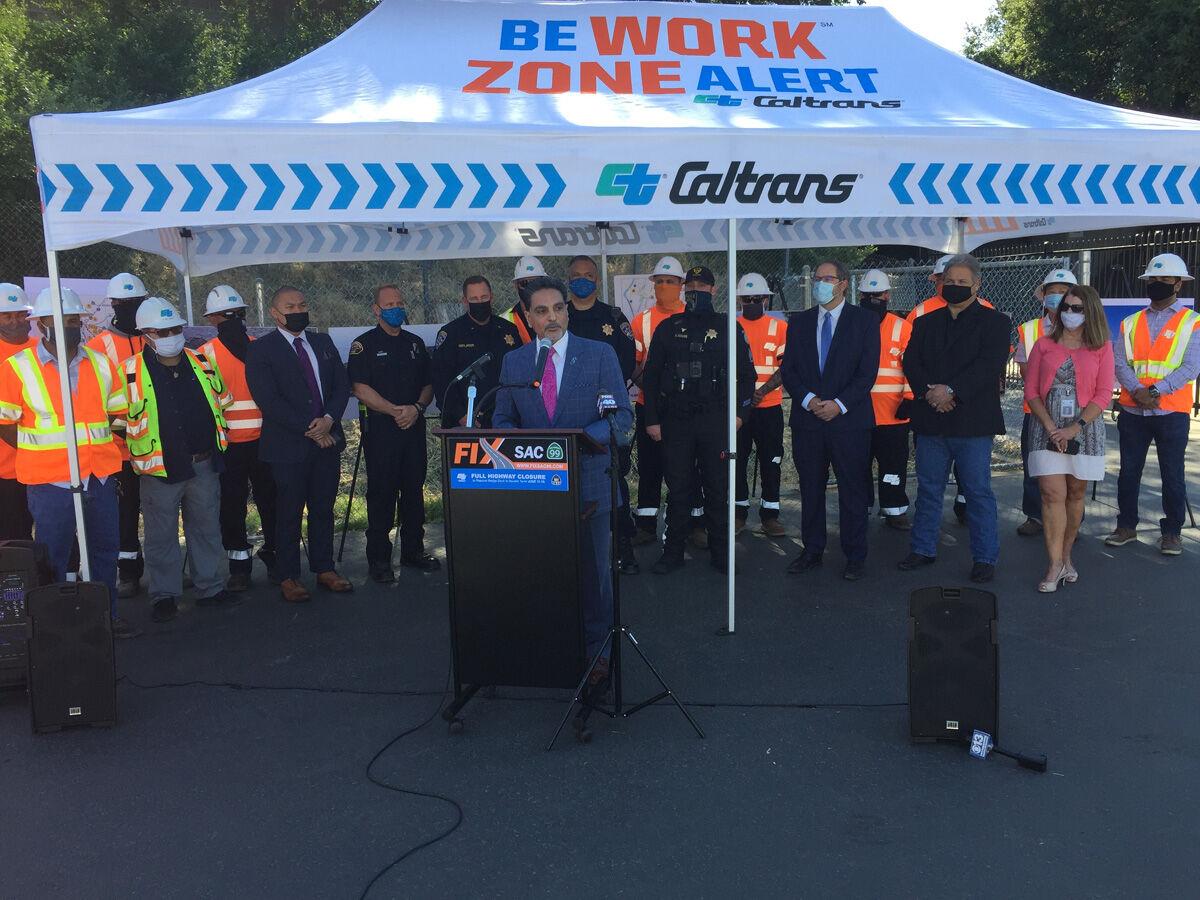 California Department of Transportation District 3 Director Amarjeet Benipal speaks to reporters as Caltrans employees and representatives from SacRT, the city of Sacramento and the California Highway Patrol look on. 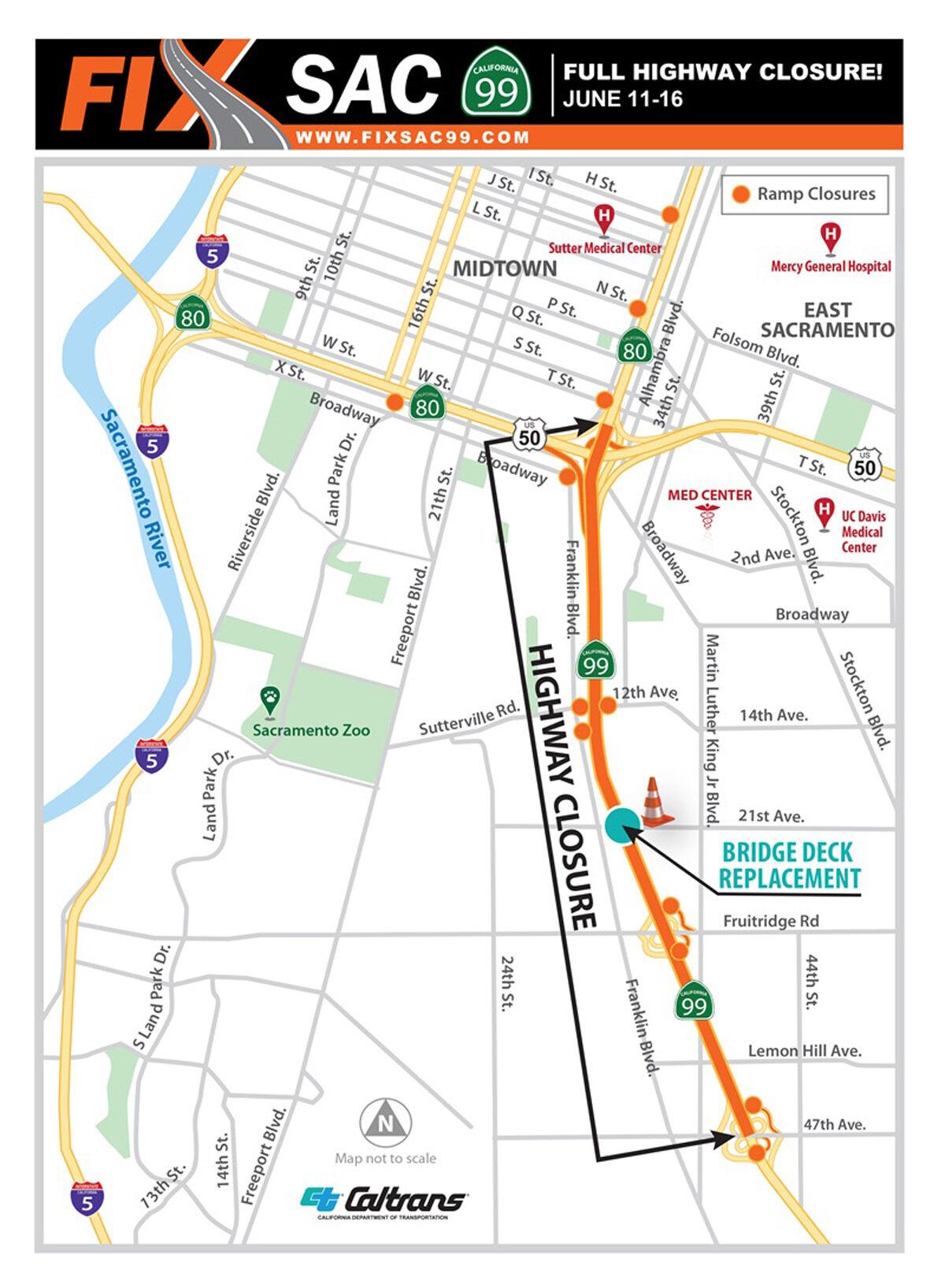 The map of the Highway 99 closure, which will run June 11-16 and extend from 47th Avenue to the Highway 50 interchange

California Department of Transportation District 3 Director Amarjeet Benipal speaks to reporters as Caltrans employees and representatives from SacRT, the city of Sacramento and the California Highway Patrol look on.

The map of the Highway 99 closure, which will run June 11-16 and extend from 47th Avenue to the Highway 50 interchange

Cars, pickups and big rigs rushed along Highway 99 on June 3 as the California Department of Transportation’s (Caltrans) Sacramento area director explained plans to fully close a section of the artery for more than four days.

Both directions of the highway will be blocked off from 8 p.m., Friday, June 11 to 4 a.m., to Wednesday, June 16, Caltrans District 3 Director Amarjeet Benipal said at a press conference. The closure will run from 47th Avenue in the south to the Highway 50 interchange in the north. During the shutdown, crews will replace the bridge deck of the 21st Avenue underpass.

For a commuter town like Galt, where many residents get to work in personal vehicles, the closure could have an outsized impact.

The purpose of closing the highway completely “is to allow the work to be accomplished quickly (and) safely for the construction workers, along with the traveling public, and minimize the impact on our local community at the same time,” Benipal told reporters.

He continued that the 62-year-old bridge is nearing the end of its service life and showing signs of age such as corrosion and cracking.

Benipal acknowledged Highway 99’s importance for the Sacramento region, noting the “closure will certainly cause an inconvenience to the traveling motorists during that time.”

According to the American Community Survey from the U.S. Census, an estimated 45% of Galt’s population commuted to work in 2019, with more than 90% of the commuters making the trip by car, truck or van. Figures that show the effect of the coronavirus lockdown are not available.

So what can people who take the highway do while it’s closed?

“First and foremost, please avoid, avoid, avoid” trips on 99 over the four days, Benipal said. He suggested taking advantage of telework and telemedicine options or making trips before the closure.

For necessary trips, the director advised public transportation “as a first option,” noting that vehicle traffic will be rerouted to Interstate 5.

South County Transit, which serves Galt, will change the route of its Galt-Sacramento Commuter Express bus line to take I-5, a representative told the Herald on Monday. Sacramento Regional Transit will offer free light rail service during the shutdown – its southernmost line stops at Cosumnes River College.

If few people take steps to minimize traffic, delays could stretch to 2½ hours, Benipal said, but “with your help, we expect that delay to be reduced to less than one hour.”

Though fully closing Highway 99 to traffic will cause headaches for many, Benipal said Caltrans found this plan preferable to the alternatives.

“We could have done it as one night at a time, which would have taken six months to do,” Benipal told the Herald in an interview. “And that was going to cause not only inconvenience to the traveling public because we have to close the lanes for a long time, but at the same time, the construction which continues to be in the neighborhood.

“So through the input of our local partners, the decision was made to actually use the accelerated bridge construction program, where we get in, finish the work and get out, and stay out for a long time.”

The $5.9 million project is funded through California’s Senate Bill 1, which was signed into law in 2017 and provides funding to jurisdictions for road maintenance and improvements.

SB 1 dollars also make their way to Galt through the Road Maintenance and Rehabilitation Account program. The city is estimated to receive about $427,000 this year for the upkeep of city streets.

To learn more about the closure, visit Caltrans’ informational webpage at fixsac99.com.