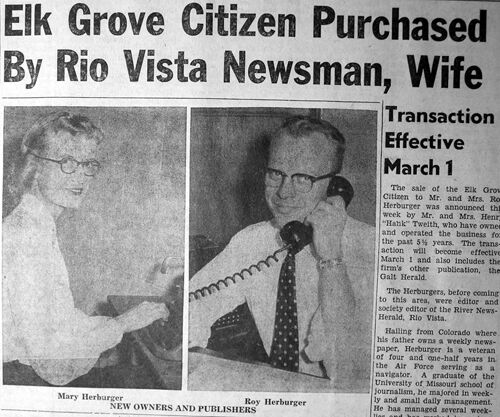 The Elk Grove Citizen introduced its new owners, Roy and Mary Herburger, in 1959. The same article ran in The Galt Herald. 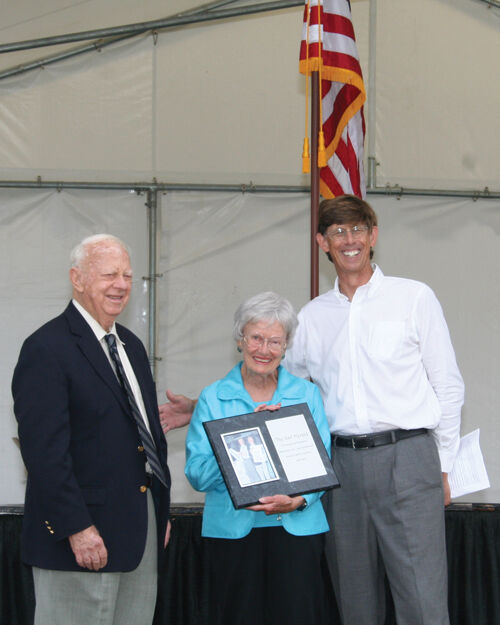 The Elk Grove Citizen introduced its new owners, Roy and Mary Herburger, in 1959. The same article ran in The Galt Herald.

With the New Year’s Eve announcement that The Galt Herald would change hands in the new year, the timing was right to recognize the Herburger family, who owned the paper for six decades.

Herburger Publications Inc., which published several greater Sacramento area newspapers, including the Herald and the Elk Grove Citizen, and printed more than 60 community newspapers and other publications, was sold to Bonnie Rodriguez, a 15-year veteran of the company.

Rodriguez, who served as the previous company’s managing editor and the editor of the Herald, became the new owner on Jan. 1. Her newly formed company is known as Valley Oak Press.

Roy, who was born in Cambridge, Missouri, on Aug. 2, 1930 and raised in Stratton, Colorado, spent his childhood around a newspaper since his parents owned The Stratton Press.

He later pursued his own career in journalism, as he graduated from the University of Missouri’s prestigious school of journalism in 1953.

Roy and his first wife, Mary, who he met while attending the University of Missouri, later came to California and worked for the Rio Vista newspaper, the River-News Herald, with Roy serving as editor and Mary working as the society editor.

On March 1, 1959, Roy and Mary purchased the Herald and the Citizen.

Four days later, the ownership change was announced to readers of the Herald.

For that day’s edition, Roy wrote: “We will do our best to give you a lively, well-written, we hope unbiased, complete in detail newspaper.”

A week later, in his column, Roy’s Comments, Roy wrote about the challenges of running a newspaper.

“Even though, for many weeks, we (have) been working on this newspaper, running it turns out to be a little confusing,” he wrote. “But after the fury is over, it is all worth it. We hope you will like the Herburger administration. If you do or you do not, why not drop us a line?”

At the time of Roy and Mary’s purchase of the Herald and the Citizen from Henry and Louise Tweith, the Citizen was celebrating its 50th anniversary, having published its first edition on Feb. 20, 1909.

Predating the Citizen was the Galt newspaper, the Weekly Witness, which is recognized through the Herald’s slogan, “Your Local Paper Since 1901.” The name of the paper changed to The Galt Herald in 1912.

Grace Zgraggen, who worked for the Citizen from 1956 to 1983 and occasionally worked for the Herald, was already employed by the company when it was purchased by Roy and Mary.

“They were both very hard workers, and they were very friendly to the community,” she said.

“Roy went to all these meetings and took all these pictures. He was gone night and day, practically.”

Zgraggen, who eventually worked for Sacramento County, also recalled that Roy got the Citizen’s staff to become more involved in covering county issues and elections.

Roy was also the face of his company for many years. He could be seen at many types of meetings and community events with a camera hanging from a strap around his neck.

Mary, who became Mary Lewis through her later marriage with Dr. Arnold Lewis, was active in the community through her service to many organizations, including the Soroptimist International of Rio Cosumnes, the Elk Grove Chamber of Commerce, the Strauss Festival of Elk Grove, and the Elk Grove Community Planning Advisory Council.

An Elk Grove park was named after Lewis in 2005, and she received the Elk Grove Citizen of the Year award in 2010.

As a newspaper family that saw many changes in the communities they served, the Herburgers continuously maintained their dedication to those communities, while many newspapers came and went during that same period.

Today, the Herald and the Citizen are printed on the company’s printing press, which is the last newspaper company-operated printing press in Sacramento County. That press is located in Valley Oak Press’s company headquarters in Galt.

David Herburger said last month that he was leaving his role as president and CEO of Herburger Publications Inc. with a sense of pride.

“(There is) pride that the people that I’ve worked with put together such a great product, given the resources that we have as a small community newspaper,” he said. “But also, (there was) a great deal of responsibility, because the tenure of ownership of (The Galt Herald and) the Elk Grove Citizen by various individuals is less important than the value that the newspaper itself has in the community.”

In selling the company to Rodriguez, Herburger mentioned that it was important to him that a “free and independent voice in the community that represents the community” is kept alive.

“Certainly, the most important thing is to see that it keeps on going,” he said.

He added that he was impressed by Rodriguez’s self-driven, community-minded approach to newspapers.

“She’s a self-starter; she’s involved in all of the things that in my experience are critical to being involved in the community as a community newspaper,” he said.

Having grown up with the company with his parents as the owners, David recalled their dedication to their work.

“(Newspapers) were in (Roy’s) blood,” he said. “He thought about doing something else, but came back to it, and he was really born to do it. And Mom was the same way in that she wasn’t in the newspaper business, but she had a keen sense of the English language. And she went to the (University of) Missouri, as well, and switched into a journalism degree, as I recall. So, they both had the same dream and the same vision to be their own people.”

David added that his parents were a perfect fit at the right time for the newspapers of Galt and Elk Grove.

“It was a nexus of a lot of positive things for newspapers and them, and so it was an ideal fit for both of them,” he said. “Not only is it cultivating information, but they also were deeply involved in the community. It was the perfect fit, perfect fit.”

Rodriguez, who purchased all assets of Herburger Publications Inc. in a private sale, noted last week that Herburger set up the company to succeed.

“We’ve been working on this (sale) for almost two years,” she said. “So, there’s been a lot of discussions about how things work, a lot of introductions made to outside customers and some of the integral players in our business. He’s not only been training me, but he’s also been training other employees to take on more responsibilities. So he’s really setting us up to succeed.”

Rodriguez expressed appreciation for the Herburger family’s longtime operation of the company.

“(It is) very impressive, especially for this industry,” she said. “The Herburger family, all of them, (including) Roy and Mary and David, (there were) blood, sweat and tears that they put in to keep this going. And work ethic? Oh my gosh, the whole family, the work ethic that they showed. Their dedication went beyond their own business (and) to their communities that they served.”