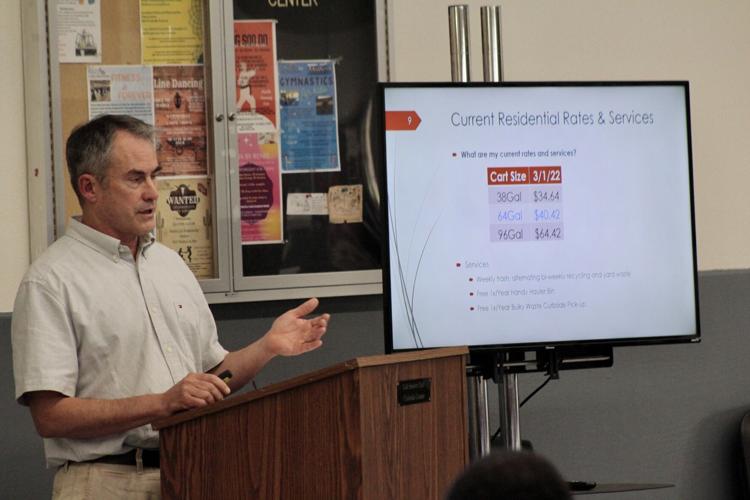 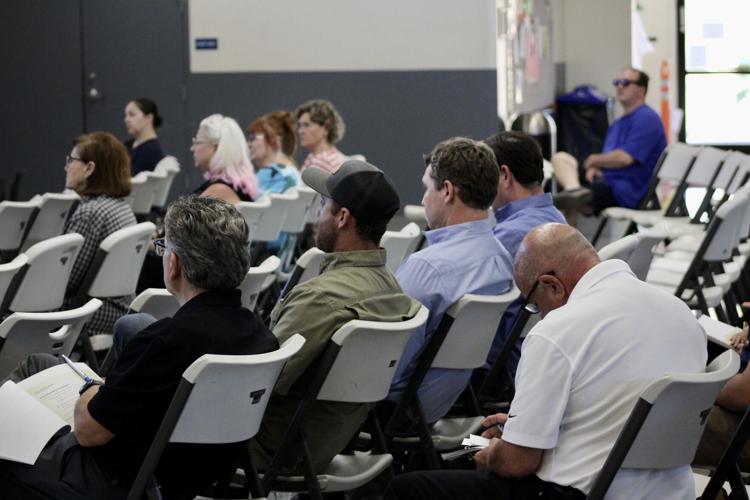 Representatives from Cal-Waste (foreground) and community members listen to the presentation of the proposal for diverting Galt’s food waste.

Representatives from Cal-Waste (foreground) and community members listen to the presentation of the proposal for diverting Galt’s food waste.

The city of Galt and Cal-Waste Recovery Systems revealed a proposed organics-recycling program, at the Aug. 16 Galt City Council meeting and at an Aug. 18 presentation to community members. The plan would bring the city in line with state law by having residents and businesses separate out food waste.

The most common residential pickup rate, for households with a 64-gallon trash cart, would increase incrementally from $40.42 per month in 2022 to $52.86 per month in 2026. Besides the trash, organics and recycling collection, this includes one free Handy Hauler bin and one free bulky-waste curbside pickup per year.

Selling compared Galt’s eventual residential rate to those of other cities in the region, saying Galt will fall in the middle of the range. The rate would be higher than those in Davis and Elk Grove, but lower than those in Sacramento and Folsom.

Commercial users would see their weekly trash and recycling bills go down by roughly 20% by 2026. The new organics service would range from $90.90 per week to $440.62 per week depending on the receptacle size and whether the business gets once- or twice-weekly pickup.

Selling gave a hypothetical example of a restaurant with 6-cubic-yard trash and recycling containers. If it switched to a 4-cubic-yard trash container and added a 2-cubic yard organics container, as well as receiving commercial rate relief, Selling said the restaurant would see a net savings of about $400 per week in 2026.

The proposal also included plans for a transfer station near the water treatment plant off of Twin Cities Road. The station would allow Cal-Waste to consolidate loads for transport to processors, and Selling said it would provide a convenient location for Galt residents looking to drop off waste, rather than traveling to Kiefer Landfill in Sloughhouse.

Attendees at the community meeting wanted to know how to collect their food scraps between pickups, with some expressing concerns about smells.

Selling said the city has gotten 2,000 plastic pails that it will distribute to residents. A pail can be placed in the kitchen, with food scraps added over the week. The pail can then be emptied into the green waste cart for pickup.

To line the pails, Cal-Waste representatives at the meeting said customers should not use compostable plastic bags. Todd Snider with Cal-Waste told the Herald in an email that paper bags with no wax or other coating are acceptable; he cited brown paper grocery bags as an example.

City staff and the Cal-Waste representatives emphasized that the program is mandated by the state through Assembly Bill 1383, which is designed to cut down greenhouse-gas emissions from food waste put into landfills.

In a landfill, food scraps decompose in a low-oxygen environment and produce large amounts of methane, which is 25 times better at trapping heat in the atmosphere than carbon dioxide. Diverted food scraps can be composted so they give off less methane, or a process called anaerobic digestion can be used to capture the methane for use as biofuel.

The program still needs to be approved by Council, a process that Selling predicted would continue through December. The program needs to be implemented by the start of 2023. View the slideshow on the organics-recycling program on the city website at bit.ly/3AeEYVD (case sensitive).

Council resolves to use sales tax for parks and rec