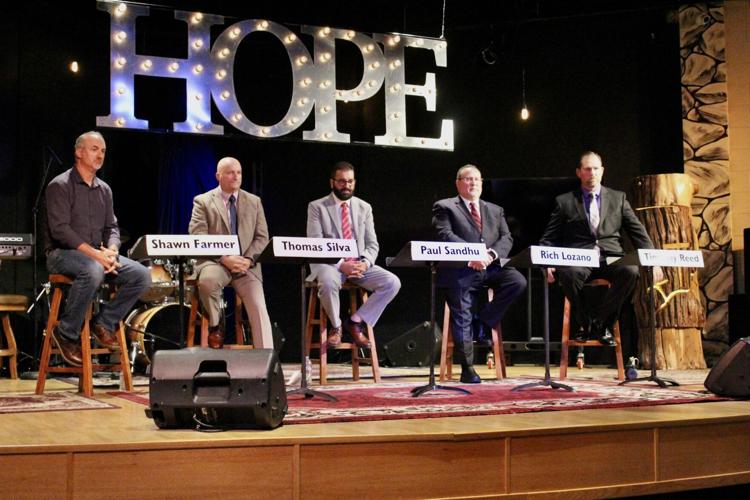 The City Council candidates sit during a pause in the candidate forum on Oct. 5. 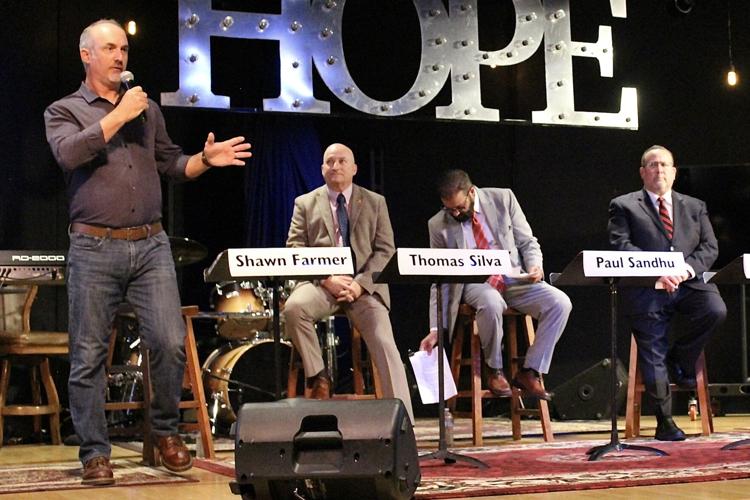 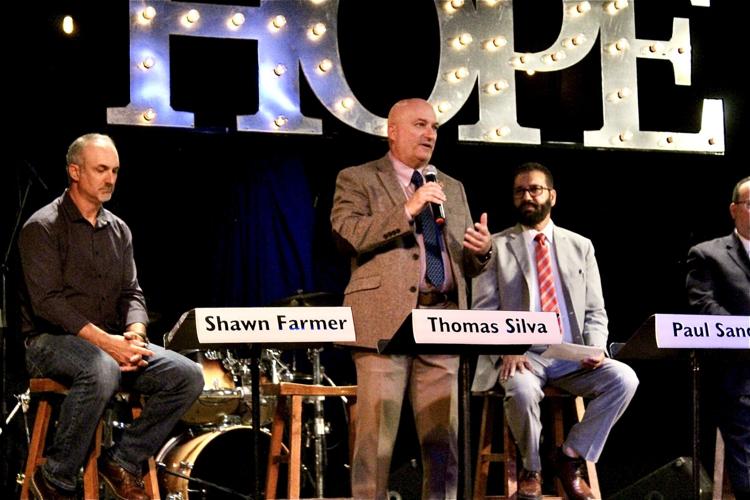 Tom Silva, president of the Galt Joint Union High School District Board of Trustees, speaks at the forum. 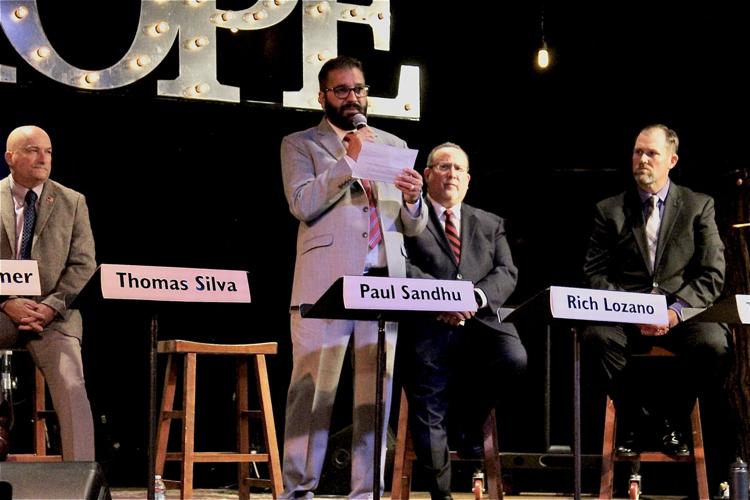 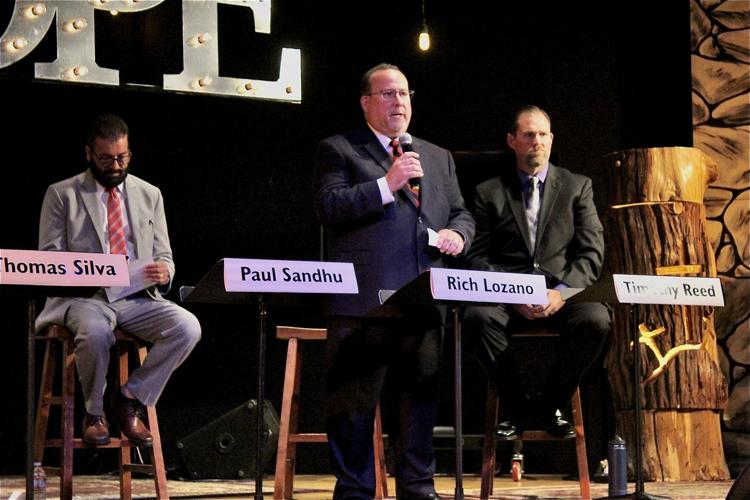 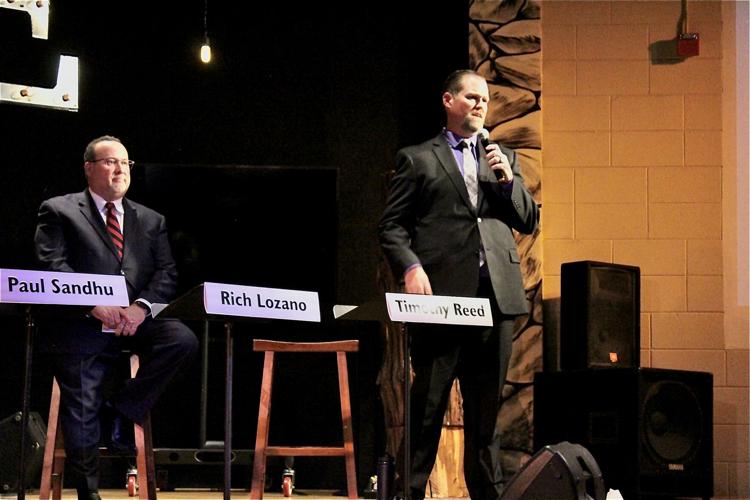 The City Council candidates sit during a pause in the candidate forum on Oct. 5.

Tom Silva, president of the Galt Joint Union High School District Board of Trustees, speaks at the forum.

Candidates for Galt City Council had a chance to share their views with Galt voters on Oct. 5 at a candidate forum hosted by The Galt Herald and the Galt District Chamber of Commerce.

A video of the full forum can be found on the Herald’s Facebook page at bit.ly/3RTDira (case sensitive).

“What we are is a representative, a voice of the people,” Farmer said. “The staff are the experts, and they present what they think we should do.”

Farmer continued that it is council members’ job to do their own research and consider residents’ perspectives.

Silva agreed and added that it is important to “ask those tough questions” during meetings. Sandhu said it is his job to balance the input from staff and community members, which leads him to ask for explanations of agenda items.

Lozano said he often asks staff to clarify recommendations to “make sure they align with community values.” Reed acknowledged staff’s expertise as important but said combining it with opinions from the community leads to a better decision.

The next question asked candidates’ thoughts on the Galt Market Community Plan and what they would change. The proposal includes leasing a portion of the market grounds for housing development. Many candidates noted that the plan hasn’t been finalized and were skeptical about including housing.

“The Galt Market belongs to the people of Galt,” Silva said, continuing that any changes need to “retain the nature and the history of the Galt Market.” He also noted that it provides revenue to the Parks and Recreation Department.

“If we own this property and it belongs to us, then we need to come up with those inventive ideas in order to generate more revenues and attract more people to come to Galt.”

Sandhu disagreed with the plan’s inclusion of housing and the removal of the softball fields at the site. Lozano also voiced concerns about the housing and wanted to ensure the market provides enough funds to sustain Parks and Rec.

Reed said that, “aesthetically, it’s a beautiful plan” but said the housing would infringe on the community’s ownership of the property. Farmer said Galt hadn’t been granted the property in order to “discard” it when it becomes valuable.

“Any agenda that comes from the staff, I will really thoroughly review it, study it,” Sandhu said. He added that he asks for any changes that he thinks are necessary. “As a city council member, I have the authority to give the direction to the staff. … I always stay with the independent study and what is the best for my citizens.”

Lozano said staff should engage with staff before agendas are drawn up, “driving” what comes to Council. The good thing about having five council members, Reed said, is that there are “five different points of view” informed by community members to direct the city.

Farmer said council members can be “proactive” or “reactive,” saying he would proactively seek community concerns to address. Silva told a story of a day when his son asked him who he works for as a school trustee; Silva responded, “Everybody.”

The candidates were asked how to keep Galt’s small-town feel when a certain amount of growth is needed to sustain the city.

Lozano said Council has focused on encouraging infill developments. He also said educating residents on city functions, such as through Galt University, is important.

“Really engaging the community that way, as well as ensuring that people don’t just come to Galt to develop, they come to Galt to build quality homes for our people to stay,” Lozano concluded.

Reed noted Galt has had a very slow growth rate and said he wants to keep it that way. Farmer said the small-town feel is “the absolute, No. 1 most important thing” that council members have to maintain and said the city should look for other means of funding besides property taxes.

Any decision made in Galt needs to be evaluated in terms of how it affects growth, Silva said. Sandhu said the city should follow its general plan and avoid annexations.

Asked what issue is most pressing for Galt, the candidates pointed to public safety and to parks and recreation.

“We have a fire department that is not meeting the national standards right now for response times,” Reed said. He also cited several open officer positions at the Galt Police Department. “If we don’t have public safety, all the other things are in jeopardy.”

Parks and recreation is the biggest issue for Farmer, who said the Galt Market needs to be reevaluated to produce more funds. Silva cited health and safety, as well as quality of life, saying he could look at the budget to find issues.

With the acknowledgment that they oppose new taxes generally, the candidates were asked what they think specifically of Measure Q, a 1-cent general sales tax that Council has put before voters. The revenue can be spent however a majority of Council wants; the current council members passed a resolution dedicating it to parks and rec.

“This tax, this idea, was born out of need to fund parks and rec,” Farmer said, adding that the city can’t do nothing while the Galt Market profits drop.

Silva commended Council’s choice to put the tax before voters and pass the resolution. Sandhu said he supported putting the measure on the ballot because a survey has shown majority backing for it.

Lozano said Council has made big budget cuts but people remain unhappy with service levels; he felt the tax was “the right thing to do.” Reed said Measure Q is a local tax, which allows residents to hold Council accountable.

The candidates were asked how to better serve the city’s older adults.

“When you look at constituents, you always want to make sure that you’re reaching out to those that you don’t hear from,” Silva said. He said he has requested outreach on the school board and would also contact older veterans.

Sandhu said he does his best to address the concerns of older adults and cited his participation in Meals on Wheels. Lozano noted that he helped get a mobile COVID-19 vaccination program started for older adults.

Reed said he saw how older adults were affected by the pandemic and wanted to enhance outreach to them. Farmer said proper parks and rec funding, which supports many city programs for older adults, is very important.

Saying what kinds of businesses they want to attract to Galt, many candidates listed entertainment and dining.

“The businesses I would like to bring in the town (are) the businesses we don’t have, like a sit-down restaurant,” Sandhu said. He also said the city needs to address sales tax leakage, the amount of sales tax Galt residents generate for other jurisdictions by leaving town to shop.

Lozano said the bigger question is how to handle sales tax leakage; he wanted to collaborate with the chamber to find solutions. Reed said Galt needs entertainment and dining, as well as more clothing retail.

Farmer noted the city used to have a bowling alley and a movie theater but wanted to preserve Galt’s identity. Silva said the city should focus on supporting local small businesses.

The candidates were asked how they would mitigate the negative effects of homelessness.

Lozano said a housing-first approach is “not appropriate.”

“We need to do what we can to work with the county, who provides the social services that are out there for our community,” Lozano continued.

Reed said Galt needs to connect homeless people to the services already provided by Sacramento County. Farmer said it is necessary to look at “the root causes of homelessness” rather than building more housing.

Silva said that most homeless people are dealing with mental illness or addiction and that they should be connected with services. Sandhu noted that Council has passed an ordinance designating city properties as parks, which makes it easier for police to remove homeless people.

Finally, the candidates were asked how to enforce policies on homelessness, which is a significant task for the police.

“We have to be the ones that are that go-between between them (homeless people) and the services,” Reed said.

Farmer said it isn’t taxpayers’ job to be responsible for homeless people, and said the police are needed to respond when homeless people commit crimes. Silva said people don’t have the right to sleep wherever they want and that homeless people should be concentrated together.

Sandhu said a permanent solution is needed with mental health and addiction treatment. Lozano noted that having the police alone handle the issue isn’t right but said they are necessary to keep public spaces accessible.