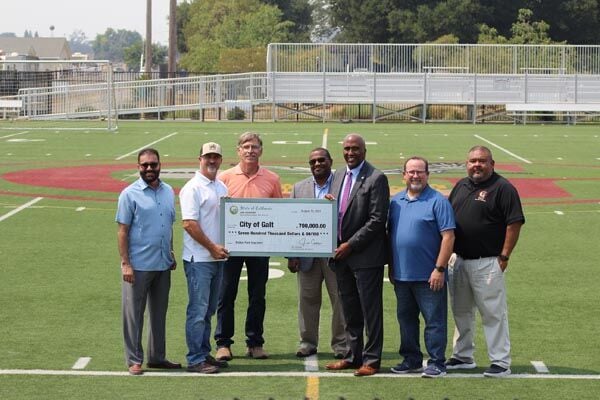 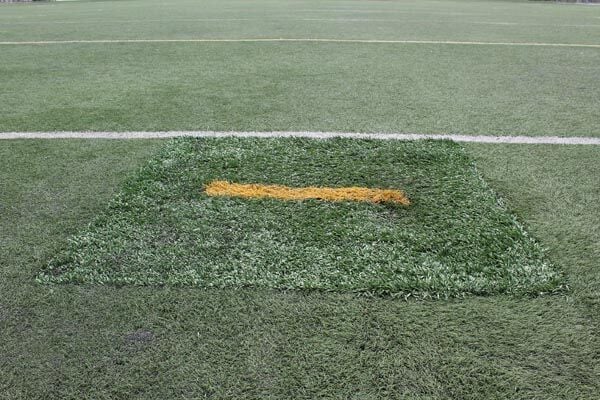 A patch of artificial turf that was recently replaced shows the difference between new turf and the current turf at the Walker Community Park field.

A patch of artificial turf that was recently replaced shows the difference between new turf and the current turf at the Walker Community Park field.

New artificial turf is on the horizon for Walker Community Park field after Assembly Member Jim Cooper (D-Elk Grove) delivered $700,000 to the city of Galt.

Standing on the field, which hosts local football and soccer teams, Cooper handed an oversized check to city leaders. He worked to secure the funding in the California state budget.

In 2019, the legislator got $1.7 million allocated to aid the city in implementing the Walker Park Master Plan.

“As long as I’m here, you’ve got a friend and ally up in Sacramento,” Cooper told the officials, who included City Council members and city staff.

Parks and Recreation Director Armando Solis explained that the artificial turf is nearing the end of its 10-12 year lifespan and will need replacing. While he hasn’t decided on a definite timeline for replacement, Solis said he hoped to get at least another year of use from the current turf.

Solis pointed out how the high-traffic areas of the field are showing wear and tear. The artificial grass has thinned out, so that the gravel and backing layer underneath are more visible. While the city has extra turf for spot repairs, repeated patches become more difficult. Additionally, the turf has gradually compacted, making for a harder playing surface.

“Over the last seven (or) eight years, we’ve benefited in a lot of ways from having that turf field,” said Alex Zavala, who coaches Galt Jr. Warriors.

He said in an interview that the field has allowed the football and cheerleading program to continue games, even when rainy weather kept them off the grass field that used to be at Warrior Stadium. And while Zavala prefers playing on grass, he said the group’s athletes often enjoy turf.

“When you’re able to step foot on a turf field, it just kind of gives you … that feeling like it’s game day,” he said.

The coronavirus pandemic has forced the program to cancel its 2021 season, but Zavala plans to bring it back next year. He looked forward to having the increased padding of new artificial turf, which he said would help protect players.

“I think that, with the city getting that money to replace that turf, it’s great, not just for the city but also for safety reasons,” Zavala said. “It’s going to be a lot better to play on, a lot more safe.”