Each duplex will have its own color scheme, incorporating stucco, tile roofing and faux window shutters, as well as a small covered porch at the entry way, as shown in this plan illustration. 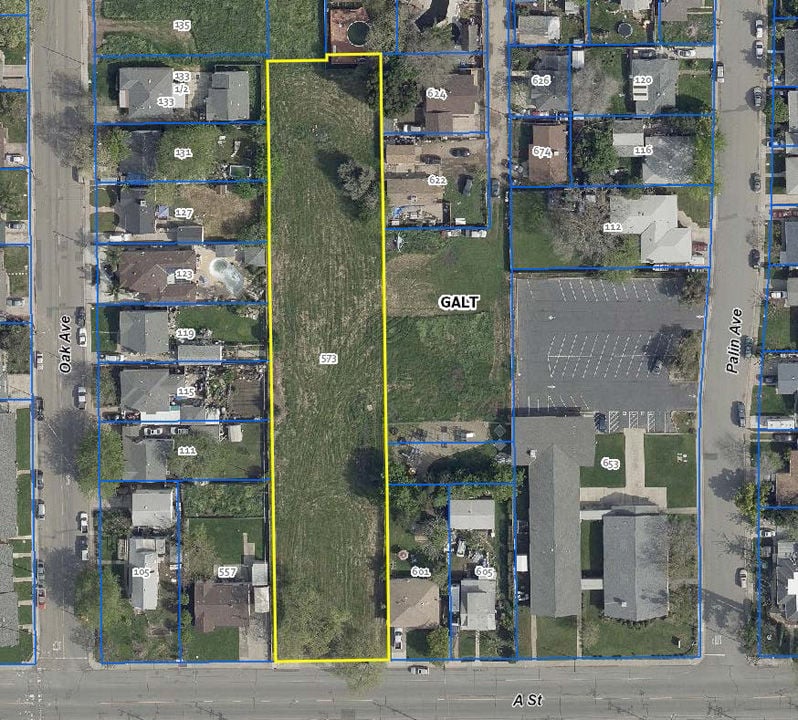 Developer Fausto Abarca Jr. has plans to develop his empty lot at 573 A Street (outlined in yellow). The project calls for three duplexes and one triplex accessed from a private gated road.

Each duplex will have its own color scheme, incorporating stucco, tile roofing and faux window shutters, as well as a small covered porch at the entry way, as shown in this plan illustration.

Developer Fausto Abarca Jr. has plans to develop his empty lot at 573 A Street (outlined in yellow). The project calls for three duplexes and one triplex accessed from a private gated road.

An infill project may go down the drain if staff and the developer can’t come to an agreement about who should pay to shed “city” water from the property.

Developer Fausto Abarca Jr. threatened to abandon the infill project, located at 573 A Street, between Oak and Palin streets, at Thursday night’s Planning Commission meeting if the Public Works and Community Development departments don’t work out the drainage problem at the site.

That water has been tolerated in the past, as there has not been any development on the site, but now Abarca plans to build three duplexes and one triplex on the property, which has been in his family for generations.

The proposed plan includes a drainage pipe from the property to an outlet on Myrtle Street, north of the property.

“I’m willing to put the pipeline to Myrtle, but I don’t feel like I should take care of the city water. That’s not my responsibility,” Abarca said.

According to Abarca, a drain inlet (DI) on Oak Street bubbles up and that runoff heads straight to his A Street property.

Through an easement agreement between the city and Abarca’s parents in 1974, a drain pipe runs the length of the west side of the property. Due to the site plans, that pipe will need to be moved to the east side, something that Abarca says he’ll do, but as far as being responsible for the excess water Abarca claims to be city runoff, Abarca says he shouldn’t be held accountable.

Although no one currently at the city was with the city in the early ’70s, Senior Civil Engineer Bill Forrest told Planning Commissioners that the agreement was struck between Abarca’s parents and the city regarding the 10-foot easement.

“I know if they had told my parents the city was going to dump its excess water on their property, they would never have agreed to that,” Abarca said. “Now you want me to take care of your engineering problems.”

In order to find who is responsible, Forrest said the first step is to look at the property.

“If it’s part of the easement, then it’s his (Abarca) problem,” Forrest said.

When asked by commissioners if the city should be draining excess water onto private property, Community Development Director Chris Erias chose his words carefully.

“Drainage requirements are different then in the ‘70s, even five years ago,” Erias said.

Commissioner Kevin Papineau asked if there was a solution to direct the flow of water elsewhere.

Abarca offered a solution, tie into a manhole on Oak Street.

“But that problem is for you guys, but you don’t want to do the work,” Abarca said.

City staff and Abarca will both have engineers look at the area to determine just who is responsible for the water in question.

If they can’t come to a solution acceptable to Abarca?

“I will plow that land for the next 20 years,” Abarca said.

The project was originally on the agenda, seeking approval from the commissioners, but after hitting the water runoff dispute, that decision has been placed on hold for a future meeting.

When introducing the project Thursday night, Erias said that the project was a “great fit” for the area and it meets housing requirements.

“It’s a great looking project,” Erias said. “It pains me that we have this issue.”

The 9-dwelling unit project will sit on an existing 1.29-acre parcel, which Abarca will subdivide into four separate parcels, three for duplexes and a larger parcel for the triplex. Each unit will have the same floor plan, which includes two bedrooms, two bathrooms and a one-car attached garage. Each unit will be 1,163 square feet in size.

Abarca plans to build a gated private road off of A Street for unit access.