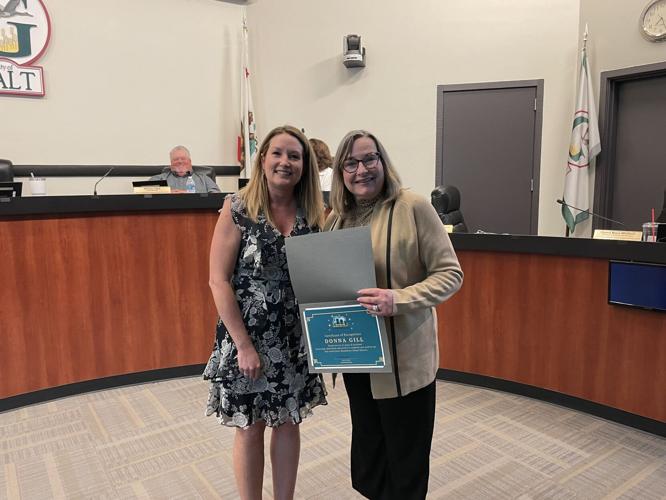 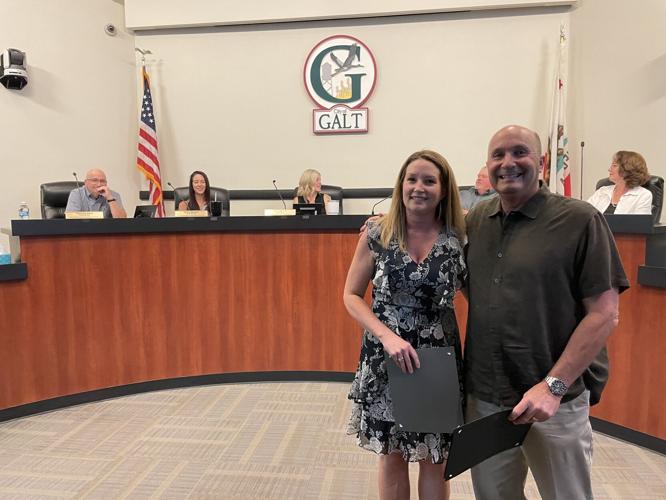 Robert L. McCaffrey Middle School Principal Ron Rammer (right) is thanked for a job well done by Superintendent Lois Yount at the elementary district board meeting. Rammer is retiring after 30 years with the elementary school district.

Robert L. McCaffrey Middle School Principal Ron Rammer (right) is thanked for a job well done by Superintendent Lois Yount at the elementary district board meeting. Rammer is retiring after 30 years with the elementary school district.

The Galt Joint Union Elementary School District (GJUESD) board on May 25 approved plans for prekindergarten funding and for new sinks at a district school, as well as agreeing to pay bus drivers minimum wage during training. It also recognized a student whose videos advanced in a contest and two retiring principals.

The state budget has provided funds for the Universal Prekindergarten Planning and Implementation Grant Program, and the district must develop a spending plan in order to get $160,000 in funds. The plan would direct money toward recruiting and hiring, staff training, supplies, and other areas within the pre-K and transitional-kindergarten system. The board approved the plan unanimously.

The board also discussed the governor’s new budget plan, specifically the ways it would affect the district if implemented. Special education would continue to receive a cost-of-living adjustment, child nutrition gaps left from lack of federal funding would be filled, and pre-K programs would also receive funding. Another facet of the plan is to average this school year’s attendance with two additional years at 95%, which is generally the average attendance rate. However, due to COVID-19, this year’s rate was 90%.

In an effort to attract more bus drivers, the board unanimously voted to pay prospective drivers minimum wage during up to 80 hours of training. Staff noted that there is a nationwide school bus driver shortage, and many interested individuals have rejected offers due to the financial struggle of not receiving income during the mandatory training. This pay would remedy that issue.

Drivers would need to sign a 12-month contract with the district, which staff said would help retain qualified drivers. Nearby school districts have implemented similar programs and have seen success in recruiting and keeping qualified bus drivers.

The board unanimously approved a contract to install sinks in the classrooms at Vernon E. Greer Elementary School. The contractor, Bobo Construction, has estimated the cost to outfit the school with 16 sinks to be $558,000. The cost would be covered by ESSER III funds, a COVID-19 relief program, as these sinks would allow for better hygiene within the classrooms.

The project would tie in to preexisting water lines, and most of the additional plumbing work would be done behind the portable classrooms receiving the sinks. With the contract authorized, work is expected to begin upon the conclusion of the school year.

Additionally, the board recognized Haley Smith, a student at Robert L. McCaffrey Middle School, for her submission of five videos to the SEVA educational video contest, three of which have advanced to the final round of the competition. Ron Rammer, principal at McCaffrey, was thanked for his 30 years of service in Galt ahead of his retirement. Donna Gill, principal of River Oaks Elementary School, was also spotlighted for her hard work before departing the district.

The next GJUESD board meeting will take place on June 22.