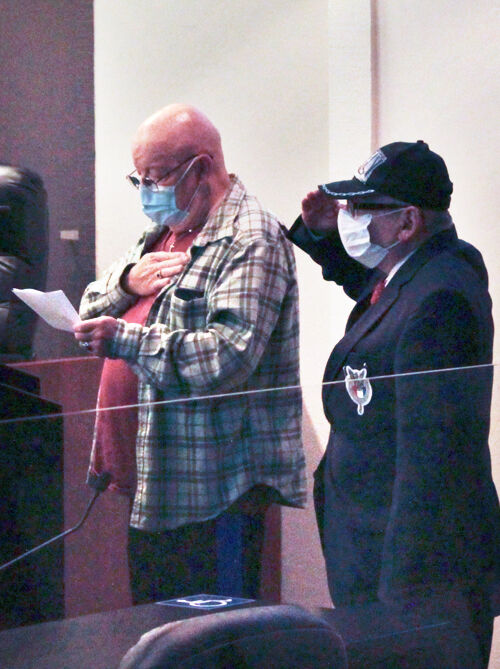 VFW District 7 chaplain Leroy John Adams (right) and Commission on Aging Chair Bob Balliet led a moment of silence and the Pledge of Allegiance to observe the 80th anniversary of the attack on Pearl Harbor. 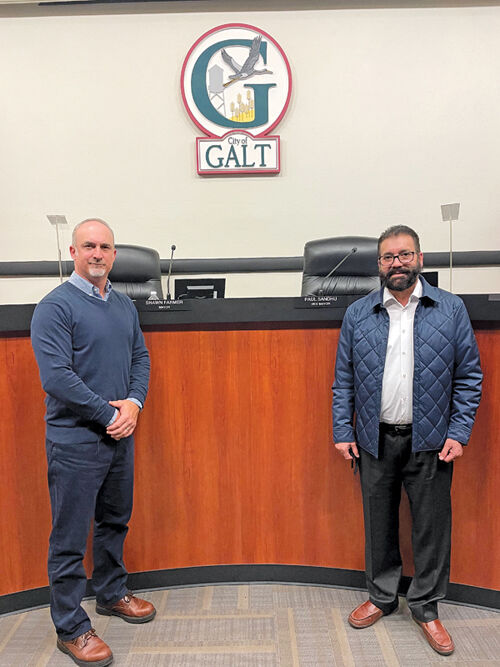 Mayor Shawn Farmer and Vice Mayor Paul Sandhu stand in front of the City Council dais after the Dec. 7 Council meeting, at which they were reappointed to their positions.

VFW District 7 chaplain Leroy John Adams (right) and Commission on Aging Chair Bob Balliet led a moment of silence and the Pledge of Allegiance to observe the 80th anniversary of the attack on Pearl Harbor.

Mayor Shawn Farmer and Vice Mayor Paul Sandhu stand in front of the City Council dais after the Dec. 7 Council meeting, at which they were reappointed to their positions.

The Galt City Council on Dec. 7 selected Mayor Shawn Farmer and Vice Mayor Paul Sandhu for an additional term in their positions. In the two votes, both 3-2, Farmer and Sandhu joined Council Member Jay Vandenburg to vote for reappointment.

“Thank you to my colleagues for your support. Thank you, Mr. Vice Mayor,” Farmer said after the votes.

The appointment took place during Council’s second stab at meeting in person; a surge of coronavirus infections foiled the first attempt after one meeting in July.

Council approved a preliminary plan to renovate C Street with landscaping, medians and improved bike paths, but it reverted some modifications recommended by city staff, citing concerns about business access.

Staff and contractor Psomas originally developed two options for the redesign of the stretch of road between Civic Drive and Sixth Street. At its Oct. 5 meeting, Council voted to pursue Option 2, which features somewhat less greenery in favor of access to businesses’ driveways.

Staff proposed four modifications to the plan: Add a crosswalk and median on the west side of the intersection with Seventh Street, keep the crosswalk at Maple Street in its current location, restrict left turns out of the Galt Plaza shopping center, and place an electronic message board near the Civic Drive intersection.

Mandeep Dhillon, owner of Dry Creek Liquor on Seventh Street, said in public comment that the first modification “disrupts the traffic flow” to his business. The median would block drivers traveling west on C Street from turning left into the liquor store’s parking lot.

To account for this change, staff had proposed making the one-way parking lot bidirectional, allowing customers to turn left onto Seventh Street, then right into the lot.

Dhillon said the lot does not have enough space to accommodate two-way traffic, and he concluded that the median would require the parking lot to be one-way, with the entrance on Seventh Street instead of C Street.

He said he had previously asked the city to look into diagonal parking on the west side of Seventh Street but was told that there wasn’t enough room.

The overall plan is “great for the city of Galt. It’s great for the C Street corridor,” Dhillon said, “but I feel like the median there is going to do more harm than good.”

Farmer drew attention to the changes in front of Galt Plaza, which would block the left turn for traffic leaving the shopping center on the driveway west of Carl’s Jr. He felt that drivers looking to turn left would either be inconvenienced or “create more danger” by going to the two nearby driveways.

Farmer made a motion retaining the crosswalk at Seventh Street but removing the median, and reverting the changes outside Galt Plaza. His motion left the Maple Street and message board modifications largely unchanged. Council approved the motion 5-0.

Public Works Director Mike Selling said the final design stage should last about nine months. The project is predicted to go to bid in fall 2022, and construction would begin in spring 2023.

Selling gave a presentation on regional groundwater conservation efforts. Under state law, Galt and other jurisdictions overlying the Cosumnes Subbasin must develop a groundwater sustainability plan.

Selling summarized the elements of the plan, which describe the behavior of water in the subbasin, explain how the jurisdictions plan to measure and achieve sustainability, and lay out the cost of the projects.

While Galt accounts for a small portion of the area’s groundwater use, Selling said that the Sustainable Groundwater Management Act (SGMA) has the subbasin assessed as a whole.

In one project that city staff has proposed, treated water from the Wastewater Treatment Plant would be used to irrigate livestock-feed crop fields. Another project would encourage excess rainwater to percolate into the ground rather than run off.

The plan will come before Council at its Dec. 21 meeting. The state has set a Jan. 22 deadline for the final plan submission.

A Public Works Department leader and a consultant gave council members an initial lesson in the setting of water and wastewater rates. The presentation is part of a comprehensive rate review that happens every five years.

The goal is to give council members an understanding of what considerations go into water rates, Deputy Public Works Director Mark Clarkson said.

“Over the next six months, we’re going to take you step by step through that process, so you’re going to be amateur rate developers by the time we’re done,” Clarkson told Council.

Isaac answered multiple questions from council members. Responding to a question from Farmer, the consultant said predicted costs can be factored into rates and that jurisdictions are allowed to have reserves in a certain range. Isaac told Vandenburg that increasing rates incrementally is an option for softening the impact of a rate hike.