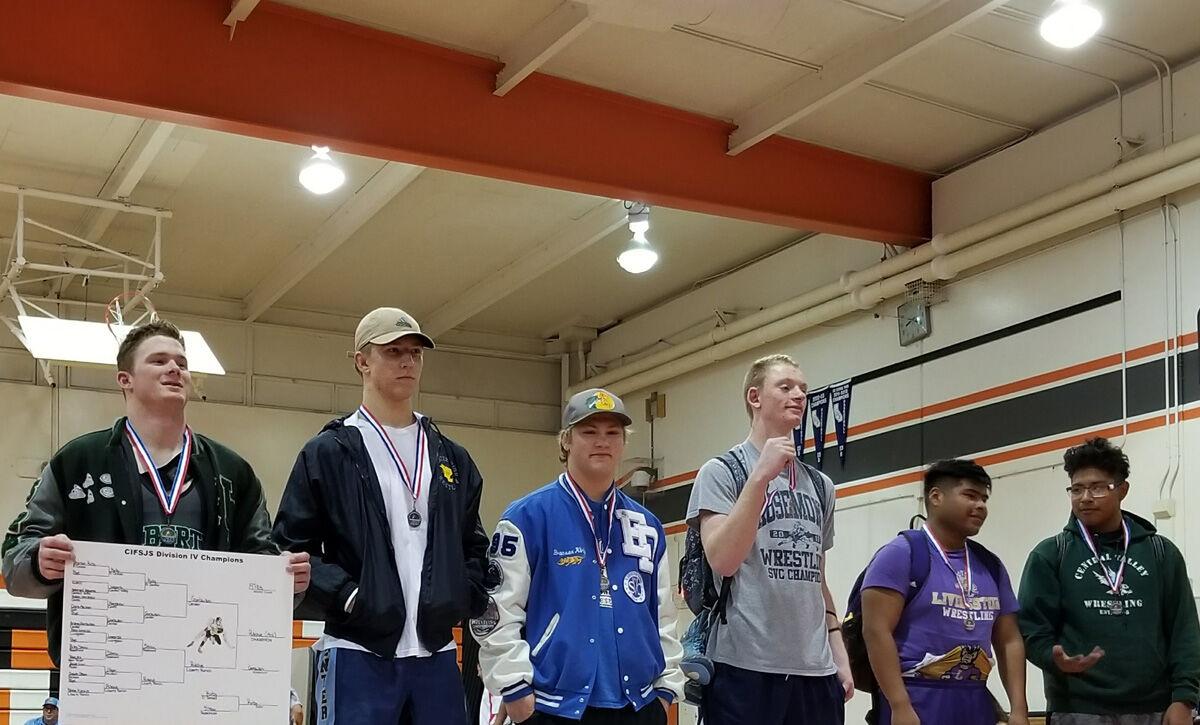 Blake Ritchie, left, poses with his championship medal at the Sac-Joaquin Section DIV Championships in February 2018. 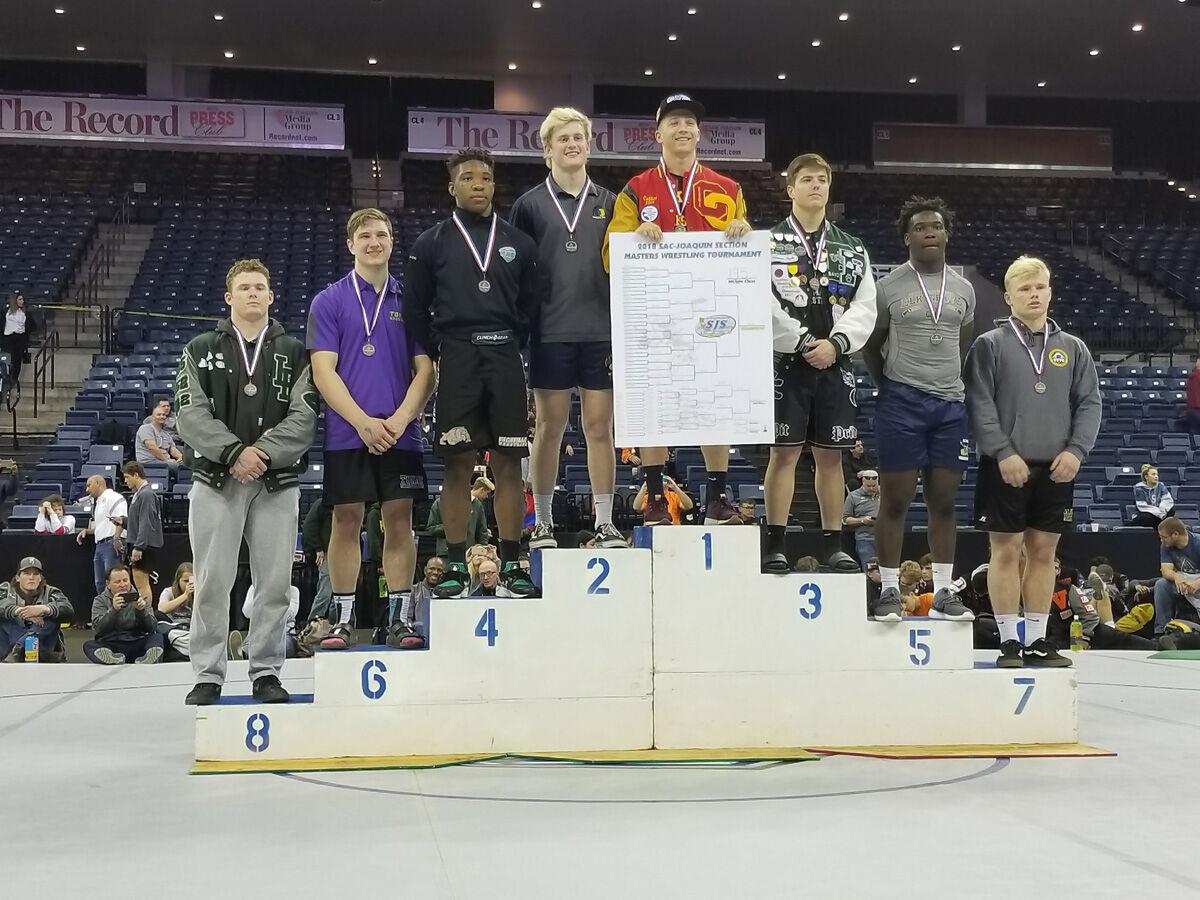 Blake Ritchie earned a spot on the podium at Masters his senior year at Liberty Ranch after placing eighth even with an injured shoulder. 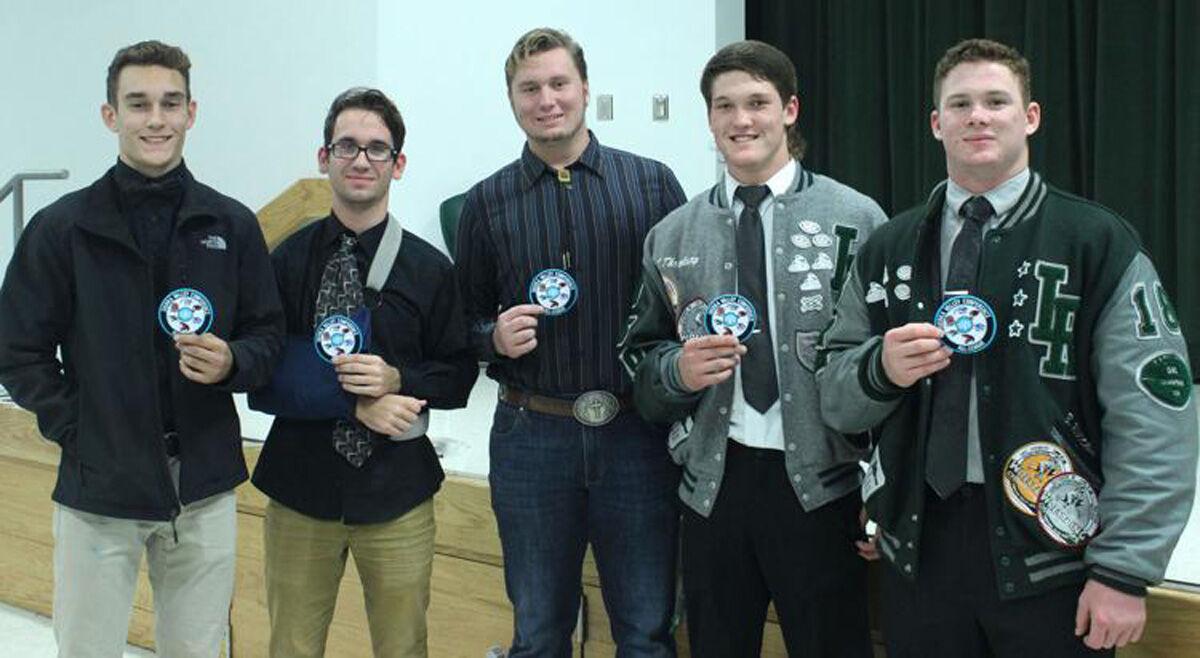 Blake Ritchie, far right, stands with his brother Thomas Thornburg, second from right, during the Hawks’ football banquet in December 2017 after both received All-League patches along with teammates (from left to right), Ethan Torres, Matthew Hopper and Jacob Keckley.

Blake Ritchie, left, poses with his championship medal at the Sac-Joaquin Section DIV Championships in February 2018.

Blake Ritchie earned a spot on the podium at Masters his senior year at Liberty Ranch after placing eighth even with an injured shoulder.

Blake Ritchie, far right, stands with his brother Thomas Thornburg, second from right, during the Hawks’ football banquet in December 2017 after both received All-League patches along with teammates (from left to right), Ethan Torres, Matthew Hopper and Jacob Keckley.

A beast on the football field as well as the wrestling mat, it was easy to recognize Blake Ritchie, since he was probably tackling someone and dominating anyone unlucky enough to stand in his way. Known for his athletic accomplishments and positive nature growing up, and more recently as a hard-working father, that spirit was taken away over the weekend when Ritchie fell overboard while fishing on the Delta and didn’t resurface until local law enforcement found his body in the morning hours on Aug. 31 while conducting a search along with his family.

Ritchie had gone fishing with friends Aug. 29 and fell out of the boat at one point.

His father, as well as one of Ritchie’s former wrestling coaches, Brian Robinson, arrived at the spot where Ritchie’s body was pulled out of the water after authorities found his body Aug. 31.

Ritchie had gone from an award-winning athlete before he graduated from Liberty Ranch High School to becoming a new dad earlier this year; those who knew him were coming to grips with the news Monday.

“He doesn’t say a whole lot. He’s real humble. He looked like a larger-than-life figure but he was the nicest, most innocent dude you’d meet. I would have issues, and he’d be like, ‘Coach, calm down.’” Johnson said in a phone interview Sept. 1. “He just had a baby, and was working. He enjoyed working, enjoyed his family; he was doing everything he was supposed to be doing. He loved being in Wilton, fishing.”

In Bryan Golder’s eyes, the former football player was one-of-a-kind on and off the field.

“I remember he’d come to practice with a cowboy hat and boots. He was his own man. He wasn’t a follower. He definitely set out to conquer. He wasn’t half-hearted. For me, I felt blessed to be a part of his life,” Golder said Aug. 31. Golder, along with head coach Anthony Linebaugh, coached Ritchie at Liberty Ranch. “A lot of kids would say, ‘Coach, I’m blessed to have you’, but I was blessed to have him in my life.”

Ritchie made his presence known both on the field and on the mat; he was co-captain of the Hawks in his senior year 2017, along with his brother Thomas Thornburg and he went on to lead the team with 96 total tackles and four sacks that year, as well as landing fifth among Sierra Valley Conference leaders in tackles.

In 2015, he was one of only three sophomores, including his brother, to play for the varsity Hawks during their 5-0 SVC championship season and subsequent run for a Sac-Joaquin Section title, in which they finished second.

“I remember, at Los Banos in the Section semifinals, he came over and gave me a big ‘ol hug and started crying, and he was like, ‘Coach, we’re going to the Section title game. We’re the first team to go to the Section game. I wouldn’t trade this for the world,’” Golder said of the Hawks’ first-ever SJS Championship game for football. “That was a beautiful moment.”

Ritchie also made school history in wrestling after he became the first Hawk to win the D IV Championship his senior year. That win, as well as his eighth-place finish at Masters, came after he was forced to sit out his junior year after injuring his shoulder during football.

Despite his athletic accomplishments during his later years in school, it is his first year on the wrestling team that brings a distinct memory to Johnson’s thoughts.

“He was a little guy. I remember when he was just a little guy with braces. Every time I think about him, that’s who I see,” Johnson said.

Linebaugh wasn’t immediately available for comment, but Golder noted one memory that stuck with him that took place during Ritchie’s senior year, in which the Hawks went 3-7.

“His senior year, he came to me and said, ‘This is a horrible season! But I tell you what, we’d better not lose to Galt,’” Golder said with a laugh. Liberty Ranch went on to beat the Warriors 40-19 that year.

“He was just one of those guys; if I could have 11 Blake Ritchies on the field, we’d go to the Sections every year,” Golder added. “We wouldn’t be the fastest, but we’d be the toughest. There have been plenty of gems that have come through Liberty Ranch High School football, but Blake was a diamond.”