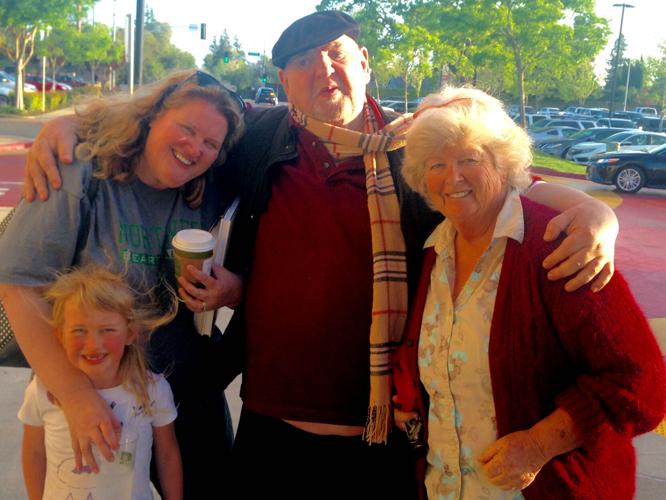 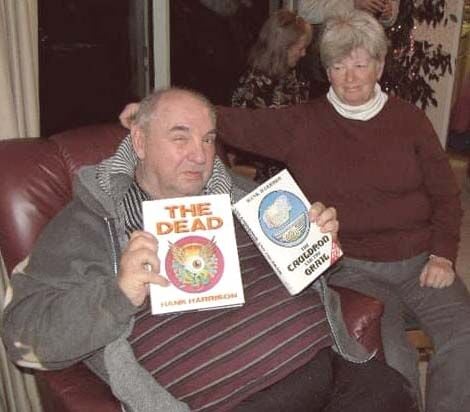 Hank Harrison holds copies of two of his published books while sitting alongside his life partner, Catriona ‘Triona’ Watson. The life of Harrison, who died in his home in Galt in January, was celebrated on June 18. 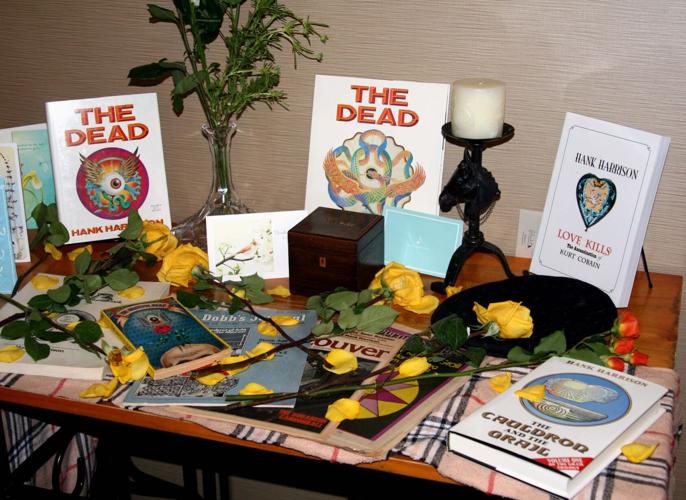 A display of various items, including yellow roses and books and magazines featuring the writings of Hank Harrison, sit on a table at the June 18 event. 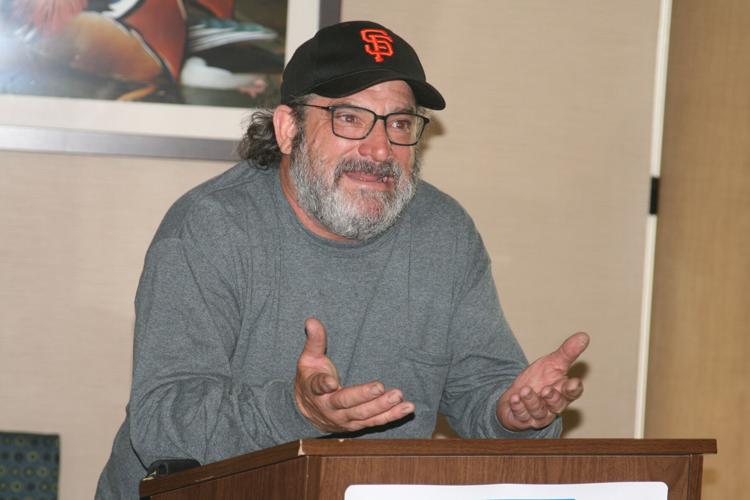 Mike Darney, of Lodi, speaks at Hank Harrison’s celebration of life event in Galt on June 18. 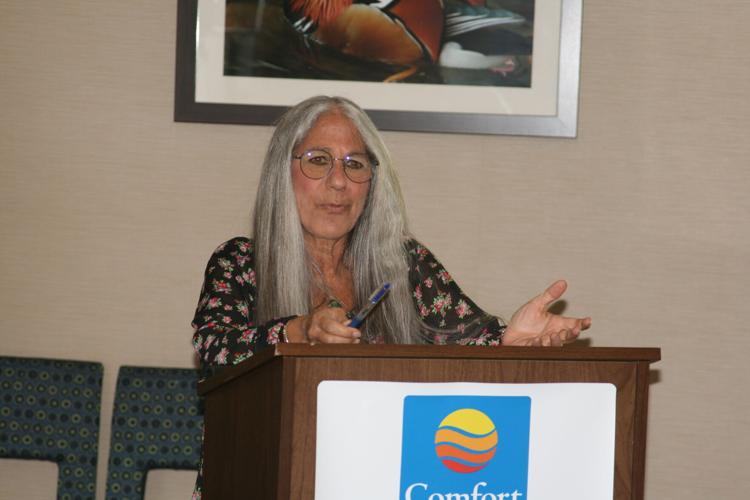 Sacramento resident Tema Abend shares a story about Hank Harrison at the event. 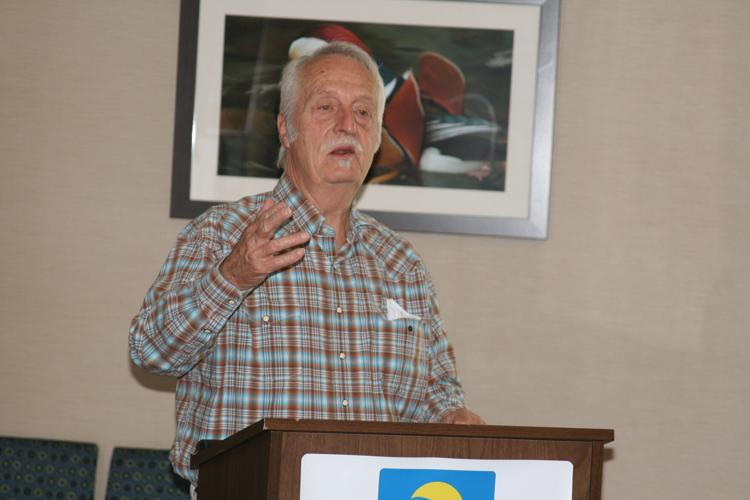 Hank Harrison holds copies of two of his published books while sitting alongside his life partner, Catriona ‘Triona’ Watson. The life of Harrison, who died in his home in Galt in January, was celebrated on June 18.

A display of various items, including yellow roses and books and magazines featuring the writings of Hank Harrison, sit on a table at the June 18 event.

Mike Darney, of Lodi, speaks at Hank Harrison’s celebration of life event in Galt on June 18.

Sacramento resident Tema Abend shares a story about Hank Harrison at the event.

Friends and family of former Galt resident Hank Harrison gathered on June 18 to celebrate the life of the author, and former manager of The Warlocks — a band that would later become famously known as the Grateful Dead.

While standing behind the podium inside the packed event room of the Comfort Inn & Suites on Twin Cities Road, Harrison’s longtime life partner, Catriona “Triona” Watson, referred to him as her “best friend and mentor,” and a man who was extremely passionate about writing.

“Hank loved life, he loved living, but most of all, he loved writing, and his writings are still alive, some published and still selling, many still to be published — but we’re working on that,” she said.

Harrison’s writings included both nonfiction and fiction books and poetry, and he was a contributor to newspapers, magazines and journals.

His books range in topic from the Grateful Dead and San Francisco’s counterculture Haight-Ashbury movement of the 1960s to medieval Arthurian literature and hang gliding. He had a longtime fascination with the topic of the Holy Grail.

Although it was not addressed at his celebration of life, Harrison authored the 2017 book “Love Kills: The Assassination of Kurt Cobain,” which presents the argument that the cause of Cobain’s 1994 death was murder as opposed to his reported suicide.

As a controversial book, which followed a longtime strained relationship between Harrison and Love, it alludes to Love as possibly being involved in Cobain’s alleged “assassination.”

On a table at this invitation-only event were yellow roses and a collection of Harrison-related keepsakes, including a copy of “Love Kills,” which was prominently displayed on a plastic stand.

As a continuously active writer, Harrison left many complete and incomplete writings and miscellaneous notes behind when he died.

Among Harrison’s partially completed works was a letter, which was intended to be read to his friends and family at his own celebration of life. He originally wrote the letter in 1983, and he updated it in 2011.

A portion of that letter — which was read by Watson at the June 18 event — reads, “The brain is born with great potential, and life is the sand that grinds it away. Anything I left behind for posterity, words, letters, books, collections were meant to elevate man from the depression that comes from knowing that life is merely an experiment, that it has no meaning outside of the meaning we ascribe to it.

“Each of us leans on the next of us, and the human at the end stands alone.”

Although Harrison wrote in his letter that he did not develop a belief in God, Watson provided her own comments on that topic.

“While Hank always maintained a detachment from, and in some cases an aversion to, organized religion, he was a very spiritual being — a fact that was evident in his everyday dealings with fellow Earth dwellers,” she said.

Harrison spent many years assisting others. He was well known as a kind-hearted individual who dedicated much of his free time and money to bettering the lives of both people and animals.

Working with Watson, Harrison rescued many animals, including cats, dogs and horses.

Harrison also demonstrated compassion for people who were experiencing homelessness. He let many such individuals temporarily live in his home to help them improve their lives.

In addition to Watson, other speakers shared their memories about Harrison.

Among those speakers was Elk Grove resident Gregg Matson, who described himself as a big fan of Harrison’s writings.

“I bought all of (Harrison’s books) that I could get ahold of, and read them all, and some of them several times,” he said. “And this guy is a really great writer.”

“He knew nobody there, (but) those of you who know Hank know that didn’t bother him a bit,” he said. “He got to know everybody there, and everybody got to know Hank. The rest of us would play music, and (Harrison) would read from his latest book. And it was just a fantastic addition to our little (gatherings).”

Another one of Harrison’s friends, Tema Abend, of Sacramento, described Harrison as one who had “amazing stories and an incredible mind.”

“His mind, to me, was just incredible,” she said. “I didn’t even know until (during his celebration of life) that he had a master’s (degree in psychology from San Francisco State University). But I know that (his thoughts) were spinning constantly, and he was always like thinking ahead.”

Lodi resident Mike Darney recalled meeting Harrison at a gas station, noting that Harrison approached him after seeing a Grateful Dead “Steal Your Face” sticker on his car.

Darney mentioned that although Harrison never became monetarily rich through the Grateful Dead, he believed Harrison was rich in other ways, including through Watson, his animals, his home and his friends.

“I think in a weird way, (Harrison) wished he had (monetary riches) and I think (he wanted to be) a little more famous,” he said. “But in the end, I hope he knows none of that matters. It’s all fool’s gold. What matters is your family, your friends, your pets.”

David Eyes, who was a friend of Harrison for more than four decades, pointed out that many of Hank’s writings included the theme of “man’s eternal quest.”

“(For instance), he would take you back in (his) book about hang gliding, back to Leonardo da Vinci,” he said.

Eyes, who lives in Santa Cruz, also spoke about the falling-out of Harrison and Love’s relationship.

“It always, always pained me that following the course of fame that she did, that that wound up leading to kind of, you know, an irreconcilable bad scene,” he said. “They were actually quite a pair, cut from the same cloth, and that might have been the undoing of that relationship. Maybe there’s only room for one of them in the room.”

Neither Love nor her daughter, Frances Bean Cobain, were present at Harrison’s celebration of life.

Harrison often said that one of the greatest disappointments of his life was that he was never given the opportunity to meet his granddaughter.

Mixed within the crowd at the June 18 event honoring Harrison was a lone Cobain family member who declined to comment for this article.

Also in attendance was Kathy Revak, Harrison’s only sister, who made the trip from Lathrop to the event, which was also streamed live to a select number of viewers.

In the event’s memory book, Revak shared some of her favorite memories of spending time with Harrison.

“(He helped) me to orient to the ‘big city,’ San Francisco and SFSU as a new psychology major,” she wrote. “And got to be with his new baby, Courtney.”

“Although he didn’t believe in traditional religion, bless him, and hope his molecules give peace and guidance to us all,” she wrote. “Peace!”