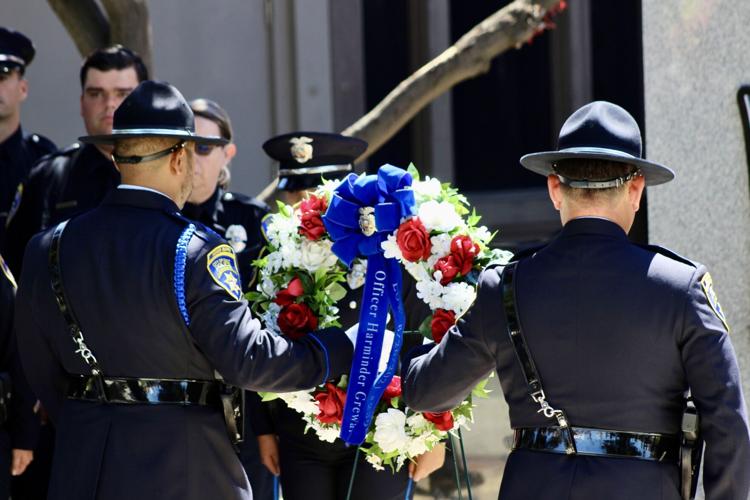 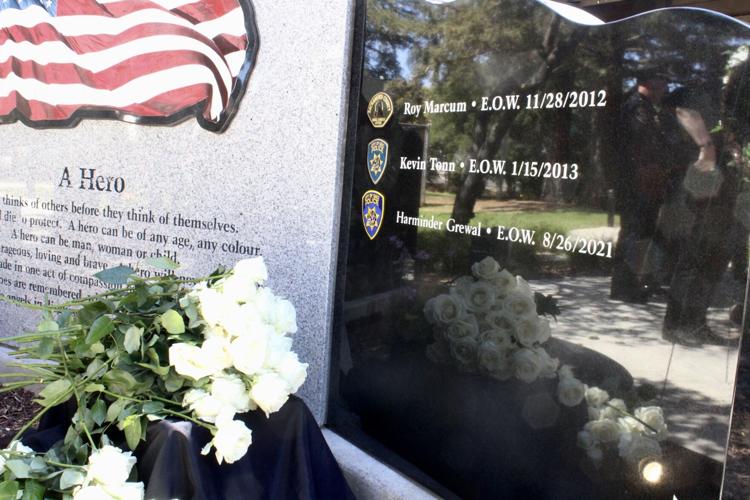 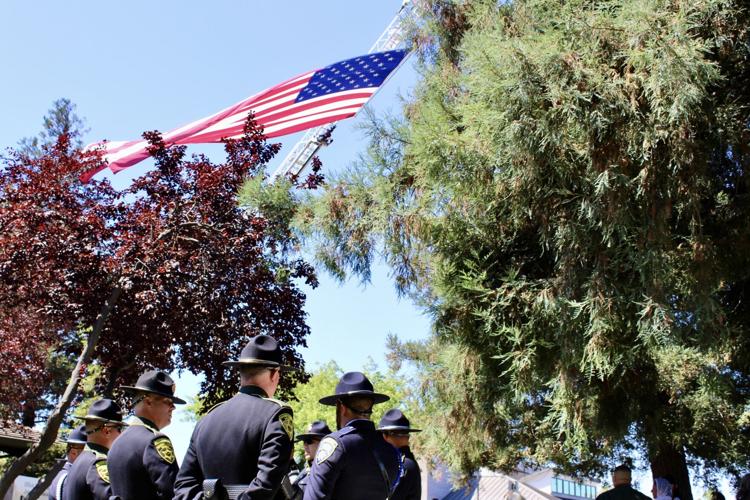 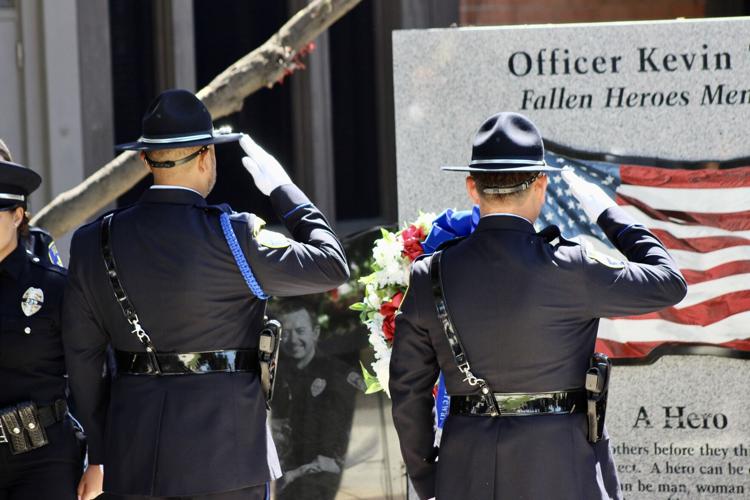 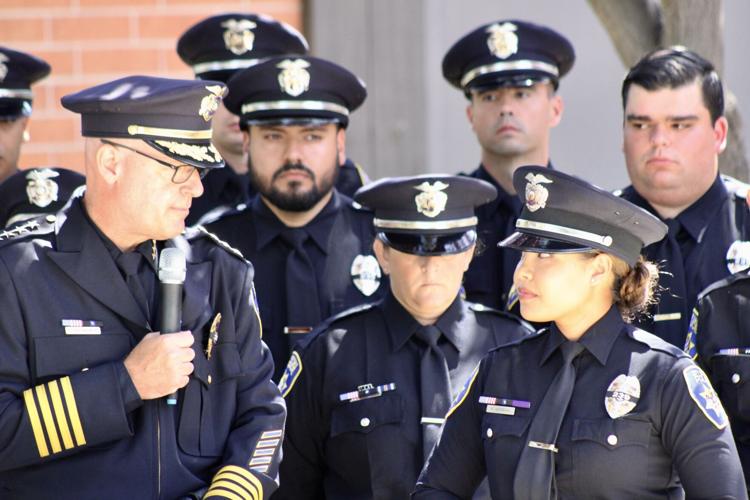 Galt Chief of Police Brian Kalinowski (left) speaks to officer Kapri Herrera during the memorial ceremony. Herrera was injured in the crash that resulted in officer Harminder Grewal’s death. 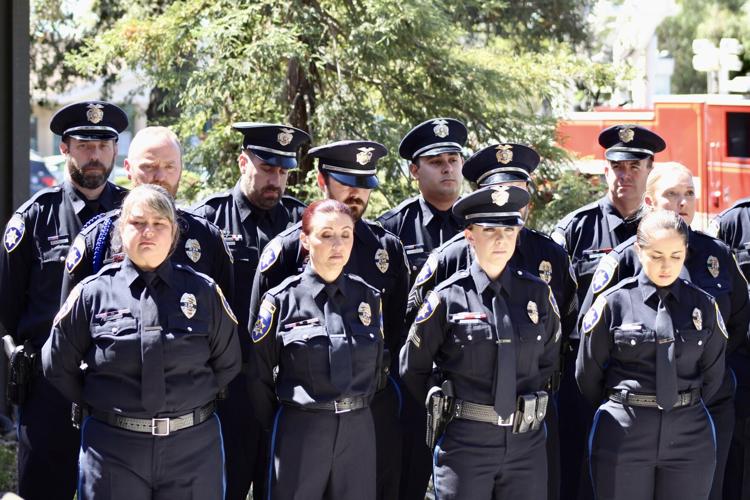 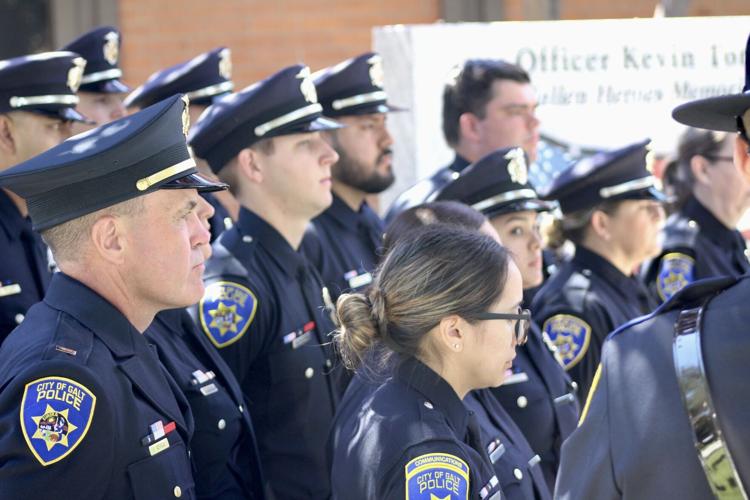 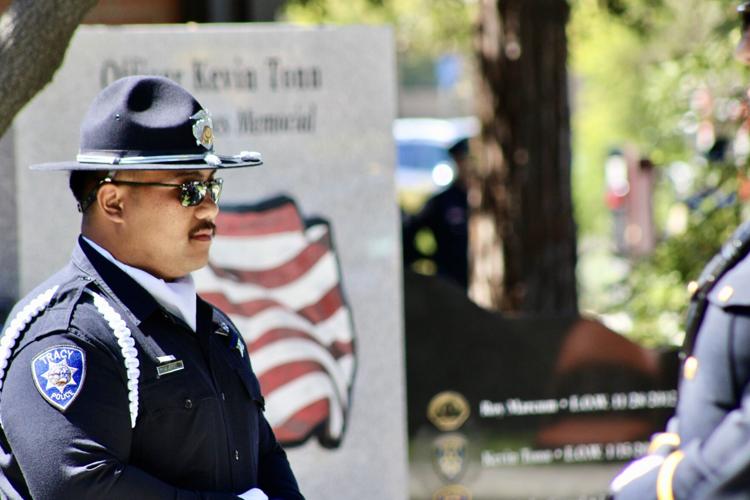 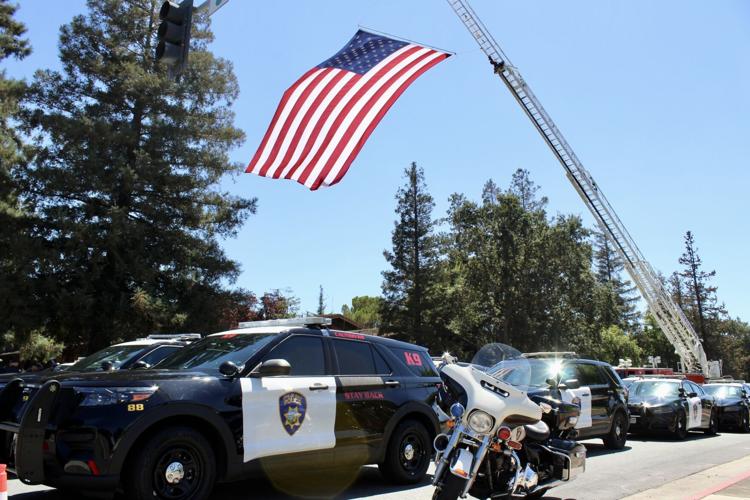 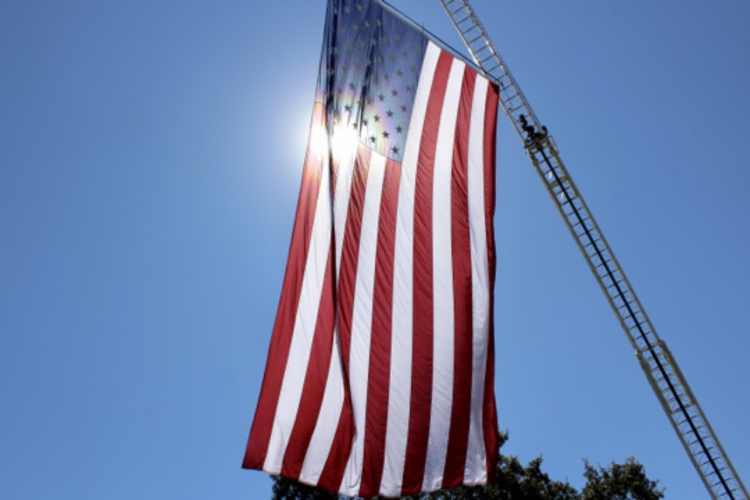 An American flag flies during the ceremony.

Galt Chief of Police Brian Kalinowski (left) speaks to officer Kapri Herrera during the memorial ceremony. Herrera was injured in the crash that resulted in officer Harminder Grewal’s death.

An American flag flies during the ceremony.

First responders and community members gathered at the Officer Kevin Tonn Fallen Heroes Memorial on Aug. 26 to induct officer Harminder Grewal on the first anniversary of his death.

Grewal’s family members and Galt police officers laid white roses below his name, the third engraved on the monument outside City Hall. The ceremony also included a wreath laying and comments from Galt Chief of Police Brian Kalinowski.

Kalinowski spoke about Grewal’s “energy for the job and his joy being a Galt police officer,” as well as the respect he received from other department staff. Kalinowski also thanked the police personnel for continuing their service.

Grewal and fellow officer Kapri Herrera were seriously injured on Aug. 22, 2021, in a head-on collision with a pickup truck. They had been driving north to help with emergency response to the Caldor Fire. Both were hospitalized, and Grewal died of his injuries on Aug. 26, 2021.

Herrera, who is in a long process of recovery, stood next to Kalinowski during the ceremony.

“As I have told you before, you are one hell of a fighter,” Kalinowski told Herrera. “I want you to know that we continue to support you, and are with you every step of the way. You are an amazing woman with a bright future.”

Additionally, Kalinowski thanked Capt. Rick Small, who was serving as interim police chief at the time of the crash, for his leadership.

The memorial commemorates two other law enforcement officers, who were killed in the line of duty in Galt: Galt officer Kevin Tonn and Sacramento County animal control officer Roy Marcum.

Kalinowski concluded his remarks by addressing the Grewal family.

“This last year has been a journey that I would never wish on anyone. But it has been an honor to have you by our side every step of the way,” the police chief said. “I can see why Harmin was so special by the gracious way you allowed us to grieve with you, while working with us on ways to continue to honor Harmin and his service to our community. As we said with the loss of Kevin, Galt police officer Harminder S. Grewal, (badge) number 239, is gone but never forgotten.”