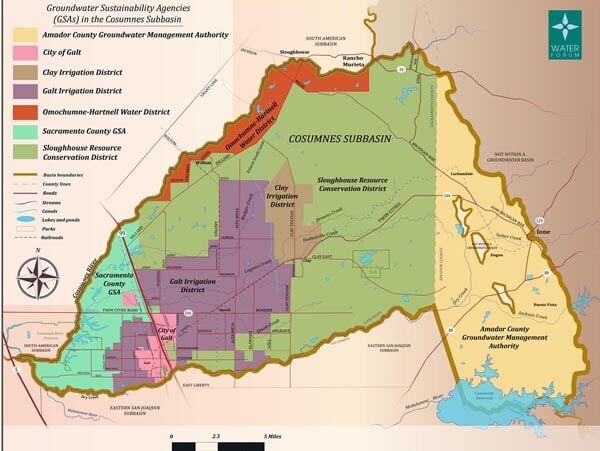 Seven agencies are working together to protect the groundwater in the Cosumnes Subbasin.

A March 24 groundwater workshop held simultaneously via Zoom and at two in-person locations draws about a dozen people to the Ranch Murieta Country Club. About 85 attended online. 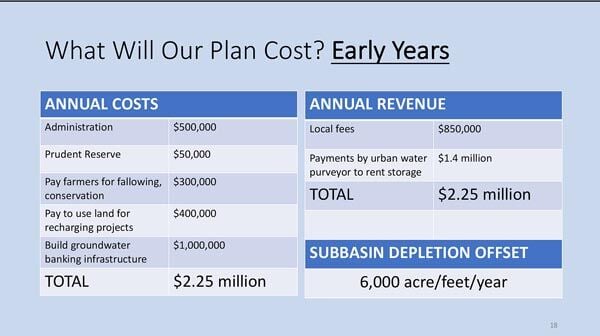 Slide shows the projected $2.25 million cost of a plan to sustain the groundwater in the early years. The revenue includes $850,000 that will be paid for by residents living inside the basin.

Seven agencies are working together to protect the groundwater in the Cosumnes Subbasin.

A March 24 groundwater workshop held simultaneously via Zoom and at two in-person locations draws about a dozen people to the Ranch Murieta Country Club. About 85 attended online.

Slide shows the projected $2.25 million cost of a plan to sustain the groundwater in the early years. The revenue includes $850,000 that will be paid for by residents living inside the basin.

Seven agencies that have been working together to sustain the groundwater in the Cosumnes Subbasin, which includes the communities of Galt, Herald, Wilton and Rancho Murieta South, held a workshop March 24.

The presentation was intended to help residents understand how groundwater will be used in the next two decades in the Cosumnes Subbasin.

The group has until Jan. 31, 2022 to submit its plan to the state on how it intends to meet its target of replacing 20,000-acre feet per year (AFY) in underground basins called aquifers to sustain the groundwater.

One of the takeaways from meeting is the plan will cost $2.25 million in the early years. Water users inside the basin will pay $850,000 of the cost, but how these potential fees will break down won’t be discussed until another workshop on May 26.

An important point for well owners is the plan does not call for metering as it has other ways to estimate water usage.

What appears to be the most consequential in the long term is the group’s plan to partner with The Sacramento County Flood Agency (SAFCA). The idea is to use floodwater that would otherwise go to waste to refill the aquifers and eventually offset the cost of the plan in later years.

The workshop was held via Zoom with two in-person locations in Rancho Murieta and Herald. It attracted about 100 participants. Austin Miller, the Sloughhouse RCD natural resource specialist used slides to explain the plan. Answering questions were representatives of the member agencies and the group’s technical expert, hydrologist John Fio, a hydrologist with EKI Environment and Water. Tim Washburn, who heads the Sacramento Flood Control Agency (SAFCA) also spoke.

The March 24 presentation is online at https://sloughhousercd.egnyte.com/dl/u2fsLc3pcq/.

Miller began with some history. At the peak of California’s droughts, there was concern that over pumping was depleting the groundwater subbasins throughout the state at a higher pace than the rain and snow melt were naturally recharging the aquifers. So in 2014, the California Legislature passed the Sustainable Groundwater Management Act (SGMA).

“A key aspect of SGMA is that it emphasizes local control,” Miller said. “That means decisions remain at the local level as long as plans are credible and capable of achieving sustainability.”

Plans that don’t succeed risk having the state manage the groundwater with higher costs and more restrictions like well metering.

Miller said seven groundwater sustainability agencies (GSAs) have been collaborating in the Cosumnes Subbasin. With state grants and local contributions, the group has funded work to gather data, to set up a monitoring network of groundwater wells and to develop a model that shows what groundwater conditions have been in the past and where the subbasin is heading.

“The Cosumnes Subbasin had seen an historic depletion of approximately 11,600 AFY,” Miller said. “One-acre feet would be enough water to cover an acre with one foot of water.”

To obtain sustainability, the model has predicted that subbasin must replace 20,000 AFY.

Miller went on to discuss key aspects of the plan that includes feasible solutions to secure 20,000 (AFY). He also covered the potential costs, implementation, metrics for measuring success, and what they would do if the plan wasn’t working.

Before diving into the agenda, Miller told participants they won’t have to put a meter on their wells under the local plan. But if the plan fails for some reason, the state can require meters.

Miller said the Cosumnes group had several priorities when creating its plan. The first was protecting groundwater for all users such as residential, agriculture, environmental habitat, and disadvantaged communities.

Second was minimizing the amount of farmland to be fallowed or taken out of production given that agriculture is a $468 million industry in Sacramento County.

“This means sharing the cost among all users in an equitable fashion and finding innovative solutions to offset the costs to our constituents here locally,” he said.

Finally, they wanted to incentivize rather than mandate participation.

“We believe if we create solutions that reward participation rather than punish those who are using water, that is the best way to reach our goals,” he said. “We also want to avoid state intervention.”

Miller said they identified three types of projects to achieve the 20,000 AFY goal. The first was reducing demand as with voluntary fallowing. The second was augmenting supply by recharging the aquifer with treated wastewater and winter floodwater. The third was offsetting costs with revenue.

Several groundwater projects are already in place. Locally, Omochumne-Hartnell Water District has a ground recharge project using water from the Cosumnes River, and the city of Galt is applying recycled wastewater to neighboring agricultural fields. But those and other projects will only bring in 4,250 AFY, leaving a 15,750 shortfall, Miller said.

Given that scenario, Miller said it is fortunate that SAFCA was looking for a partner in an innovative program called FloodMAR (managed aquifer recharge). Past SAFCA projects have included raising the Folsom Dam and improving levees throughout the region.

Washburn explained the idea behind FloodMAR. In about four out of 10 years, the American River has excess flood water of about 125,000 AFY that flows into the ocean because there is no place to put the water into the system.

“The concept of this project is to create an ability to capture that storm water, hold it in the flood space at Folsom (using three more existing reservoirs) in the wintertime and to meter it down the Folsom South canal so it can be stored in the groundwater basin,” according to Washburn.

Miller said a large entity like SAFCA was interested in working with the Cosumnes Subbasin because it needs revenue pay for FloodMAR.

Cosumnes would purchase water from the SAFECA program to enable it to operate and maintain FloodMAR. It is projected that Cosumnes would eventually buy 15,000 AFY.

Under the plan, Cosumnes would generate revenue to offset those costs by renting subbasin storage to water purveyors for later use and by selling stored water to them for a higher price.

SAFCA also sees the Cosumnes Subbasin is a “very appealing partner” due to its natural groundwater capacity, Miller said.

Having infrastructure already in place also will make it more cost-effective.

“We have the Folsom South Canal that could transport water from the American River, down into the subbasin and then connect to the Mokelumne Canal that we would potentially use to transport water to urban areas in the East Bay,” Miller said.

Given that building FloodMAR will be complicated, two simpler options exist. But both would be very costly, Miller said.

Miller also discussed how the working group will determine if its plan is working, how it will measure progress and action benchmarks should water levels drop too much or water quality decline.

Several participants asked how the working group was going to split the cost of the plan across different users such as farmers, businesses and domestic users. Carrie Schmitz, who is with the Sacramento County GSA, responded.

“We don’t have the answer to that yet,” Schmitz said, “Each of the GSAs has the authority to implement fee programs to fund the work we do.”

A committee has been working collaboratively for several months to flesh out the best fit for the basin.

“We would like to have a consistent methodology for sharing costs across the basin,” Schmitz said. “But, as you know, there is a diverse set of stakeholders in the basin, so there is a lot of thought that goes into it.”

Schmitz concluded by saying the best answer about water user costs was “to stay tuned.”

Stephanie Horii, who was the technical facilitator for the meeting jumped in.

“At our next public meeting on May 26, we are going to have a deeper conversation on the costs and the funding needed to support them,” she said.

Another audience member asked how the working group would know how much water was being used without metering wells. Hydrologist Fio answered.

Water usage is being estimated by land use and irrigation practices.

“You have a variety of different types of crops in the agricultural sector,” he said, “and those crops have different water requirements.”