Guests at the Galt District Chamber of Commerce October luncheon listen to Galt City Manager Lorenzo Hines give an update on the city. 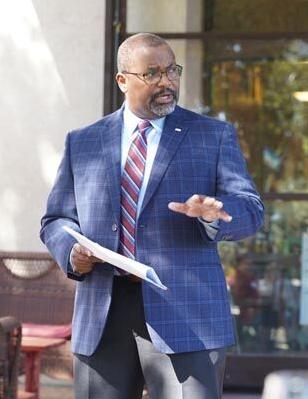 Guests at the Galt District Chamber of Commerce October luncheon listen to Galt City Manager Lorenzo Hines give an update on the city.

Not even two months into his tenure, the new Galt City Manager Lorenzo Hines found himself in front of over 30 guests at the October Galt District Chamber of Commerce luncheon, giving an update about where the city stands.

Normally held in the first quarter of the year, the annual State of the City luncheon was pushed back to this fall due to the COVID-19 pandemic.

Held outside at Consumnes River Farm in Thornton, guests enjoyed a light charcuterie meal at the less formal affair, before settling in to listen to the new administrator.

Top of the list to discuss was growth capabilities for the Great American Little Town.

Hines said that, before his seat was even warm, he reached out to many civic and business leaders to get a feel for the community.

“The one thing, the one worry, I kept hearing about was too much growth,” Hines said. “I keep hearing, ‘we don’t want to grow like a certain city to the north.’”

Hines said, after hearing the concern, he started to do some research and found that the city is essentially landlocked, unable to reach any numbers similar to the cities to the north and south of Galt.

Hines said that, according to the California Department of Finance population projections for Galt, the city is expected to chime in at 25,700 in population by the end of this year. And in year 2030, population is projected to be at 27,900, and in 2040, 29,500.

Hines presented the top six residential developments, which potentially will have homes up for sale within the next year.

Top of the list is Veranda at River Oaks, located at the northeast corner of Walnut Avenue and Carillion Boulevard. This 60 single-family unit development is currently for sale, and 17 building permits have already been issued. The builder is Elliott Homes.

The other five developments are not expected to be ready to open their sales offices until summer 2021.

Dry Creek Oaks, the largest of the single-family homes, is an age-restricted, senior development. Located on Boessow Road, Dry Creek Oaks by Riverland Homes is slated to have 206 homes.

Parlin Oaks, the largest development overall, is slated to have 144 single-family homes, as well as 80 apartment units. This Blue Mountain Communities development will be located at the southwest corner of Walnut Avenue and Carillion Boulevard.

“This is our best guess right now,” Hines said of the six developments. “We can’t control, we can’t motivate, we can’t push the developers. They’ve got to move at their own pace based on market conditions.”

After a few questions from audience members, Hines clarified that although developments get approved in City Council, it can take many years before “dirt is turned with a shovel,” and that is assuming all goes well.

Along with growth, Hines spoke to fiscal challenges threatening the city. And although a new team captain has shown up at City Hall, Hines is still facing the same financial issues plaguing the last two administrations.

Continued loss of Galt Market revenues, combined with underfunded Lighting and Landscape Districts, has the city budget bursting at its seams. And now, with the uncertain impacts due to the COVID-19 pandemic, Hines said a closer look is needed.

That closer look will include looking at goals already set, including focusing on long-term revenue enhancement options that are based on voter approved measures, mid-term Council decisions, and short-term expenditure cuts.

But, Hines said, all is not lost, as the city has already experienced positive changes to help boost the economy. New businesses to join the Galt family during 2019-20 are Papa’s & Wings, Starbucks, Flames, Impact Sports & Play Center, Gilley’s Car Wash & Dog Wash, Frontier, The Printing Kings, and Back Alley Brew House, which was shut down due to COVID just weeks after opening. The brew house has recently reopened.

Several existing businesses expanded their operations during 2019-20 – Best Western, BMD and El & El Wood Products all have completed, or are near completing, expansion projects.

New businesses under construction at this time are Dutch Bros Coffee, LaQuinta Inns & Suites, and the joint Jamba Juice, Baja Fresh and 76 Gas Station development located at Simmerhorn and Highway 99.

According to Hines, the City Clerk’s office has processed 85 resolutions, two ordinances and 99 public record requests in Fiscal Year (FY) 2019-20.

The Human Resource department in FY 2019-20 filled over 150 full-time and part-time positions through recruitments, job reclassifications and promotions.

In the 2019 calendar year, the Galt Police Department responded to over 23,000 calls for service and is expected to hire a total of five sworn officers and three dispatchers this calendar year.