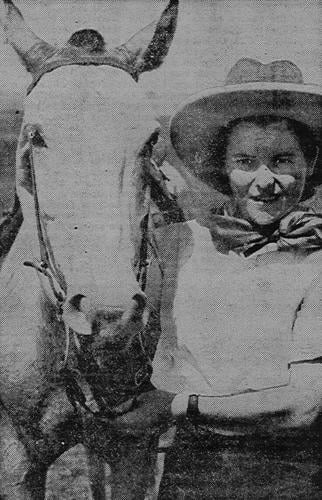 From a preview of the first Sacramento County Fair in 1937: ‘Miss Frances Smoot, shown above with her mount, has been selected to rule as queen at the rodeo to be held in connection with the Galt-Sacramento Livestock Show and Fair on August 6th, 7th and 8th.’

Cowgirl Will Rule At Rodeo

From a preview of the first Sacramento County Fair in 1937: ‘Miss Frances Smoot, shown above with her mount, has been selected to rule as queen at the rodeo to be held in connection with the Galt-Sacramento Livestock Show and Fair on August 6th, 7th and 8th.’

The 2022 Sacramento County Fair is coming up on May 26, and you might know that it was established in Galt in 1937. But you might not know that the tenacity of Galtonians, and something called “donkey baseball,” played roles in making that first fair a success.

What became the Sacramento County Fair was first known as the Galt Livestock Show and Rodeo, and it got off to an inauspicious start in 1935.

“The history of the Galt Livestock show is one of a lost battle turned into victory,” wrote Leland Elam, who was in charge of the show’s publicity, in a 1937 article for the Herald.

“Three years ago, the Galt District Chamber of Commerce members decided to put on a stock show to call attention to the dairying industry surrounding Galt. It was an uphill battle to put over this first show. It was difficult to get people really interested in it.”

That first iteration included a small livestock exhibit. “A dance, carnival, races and other events for the young people of the community were held. When it was all over, the fair committee was in the red.

“Being of a fighting spirit, this did not discourage them,” Elam wrote.

Organizers held fundraisers to pay off their debts and finance the 1936 fair. They also bought the land that would become the Galt Market grounds, building barns for the animal attendees and grandstands for the human ones.

As exhibitors arrived with their animals on Friday, the fair opened with three softball games featuring Galt teams.

Saturday brought the judging of the livestock. And that afternoon, Elam promised, attendees could participate in a variety of races, including a “change clothes race” and musical chairs.

There was also a rodeo that included a bucking-horse contest, steer roping and riding, and calf roping.

On Sunday morning, attendees were treated to a parade with bands, floats and more than 200 horses.

“The crowning event of Sunday will be a donkey baseball game between a merchant’s and a farmer’s team picked by Galt community citizens,” Elam wrote.

Donkey baseball was a popular pastime during the Great Depression, according to The Washington Post columnist John Kelly. All the players rode donkeys, except the pitcher and catcher, as well as the batter, who would mount a donkey after hitting the ball.

“Donkey baseball has more laughs to the minute than any other form of amusement or any sport known. It is a game everyone will want to see,” Elam wrote in the Herald.

The fair continued to be held in Galt until it relocated to Cal Expo in 1954.

The 2022 Sacramento County Fair may not boast donkey baseball, but watching Galt’s youth gather in person to show off the results of their hard work is sure to be just as exciting. And it’s all thanks to a bit of Galt persistence nearly 85 years ago.

See our It’s Fair Time! special section for biographies of many of the participants and information on the livestock auction.