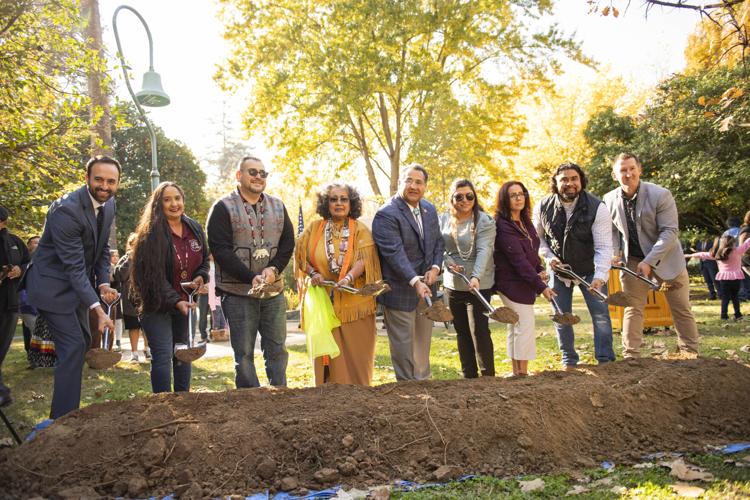 Sacramento-area tribal leaders and other dignitaries participate in a Nov. 14 groundbreaking ceremony for a monument honoring Native Americans at Capitol Park. 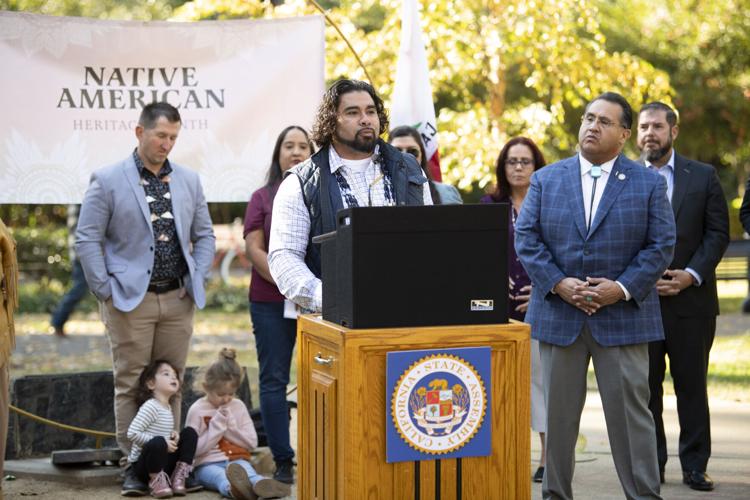 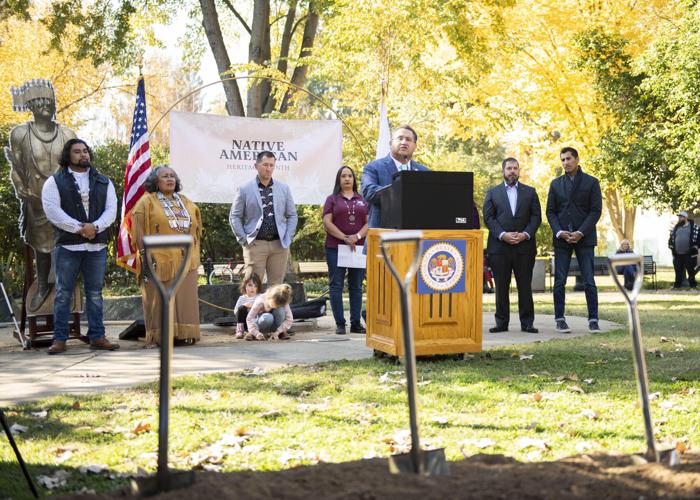 Shovels stand in the foreground during a speech by Assemblymember James Ramos, D-Highland, at the Nov. 14 event.

Sacramento-area tribal leaders and other dignitaries participate in a Nov. 14 groundbreaking ceremony for a monument honoring Native Americans at Capitol Park.

Shovels stand in the foreground during a speech by Assemblymember James Ramos, D-Highland, at the Nov. 14 event.

A groundbreaking ceremony for a monument honoring Native Americans was held at Capitol Park on Nov. 14. A local tribal leader said it will help tell the “real story of California history.”

This monument will replace the Junípero Serra statue, which stood on the Capitol grounds for more than a half-century, until it was toppled during a racial justice protest on July 4, 2020.

Fourteen months later, on Native American Day in California, Gov. Gavin Newsom signed Assembly Bill (AB) 338, which authorizes the installation of a monument to the California native people of the Sacramento region at the former site of the Serra monument.

According to AB 338, Serra, the Spanish, Roman Catholic priest, missionary and colonizer who set up Franciscan missions from San Diego to San Francisco in the 1700s, oversaw missions during a period in which Native Americans experienced enslavement, mutilation, genocide and assault on women.

The bill was introduced by Assemblymember James Ramos, D-Highland, the first California Native American to serve in the state’s Legislature.

The groundbreaking ceremony was held as the state and nation celebrates Native American Heritage Month.

Franklin was essential in preserving Miwok dances and traditions, and he also helped build three Northern California roundhouses, which are designed for Native American ceremonies, songs, dances and other activities.

Sacramento sculptor Ronnie Frostad will design the memorial, which is scheduled to be installed in January or February.

Ramos, a member of the Serrano/Cahuilla tribe, shared his feelings about the new monument.

“Once this new monument is completed, it will serve to remind students and all visitors to this historic Capitol Park that Native Americans lived on this land — and cared for it — long before California statehood, and its preceding eras,” he said.

California has more Native Americans than any other state, and tribal leaders noted that the new tribute is a welcome, if long overdue, acknowledgment.

Wilton Rancheria Tribal Chair Jesus Tarango, who is a nephew of Franklin, spoke about the importance of the new monument.

“Our people have lacked representation for far too long on our own lands, but this moment is a step in the right direction for all California Indigenous people,” he said.

Tarango told the Herald that the only Native American tribute currently located at Capitol Park is a grinding rock and acorn tree.

“To have the second statue or monument to be dedicated to California’s first inhabitants, I can’t explain what it means to me to know that statue will stand there, you know, forever,” he said.

“The fact that our children will be able to walk that Capitol grounds and see a likeness of themselves, and also start telling that real story of California history, it’s a beautiful thing.”

Tarango spoke about his and other Native Americans’ perceptions of Serra.

“I think if you ask native people, we know what the missions stood for, for our people here in this region, and even more so for some of the ones down in Southern California,” he said.

“As a Catholic man, there’s nobody who’s going to tell me if Serra was doing the things that he did back then today, there’s no Catholic person that I know that would say that it’s OK for him to kill innocent men and women and children today.”

In a statement released the day after the Serra monument was toppled in Capitol Park, Jaime Soto, bishop of the Roman Catholic Diocese of Sacramento, shared his own views about Serra, who was elevated to sainthood in the Catholic Church in 2015.

“There is no question that California’s indigenous people endured great suffering during the colonial period and then later faced the horror of government-sanctioned genocide under the nascent state of California,” he wrote.

“This legacy is heartbreaking. Yet, it is also true that while Father Serra worked under this colonial system, he denounced its evils and worked to protect the dignity of native peoples. His holiness as a missionary should not be measured by his own failures to stop the exploitation or even his own personal faults.”

But for Tarango and many other Native Americans, Serra is not a person who should be celebrated.

Tarango also shared his feelings about having the life of his uncle memorialized at Capitol Park.

“Having been one of (Franklin’s) dancers when he was around and learning all my culture from him, it means even more to me, because that’s who I learned from,” he said.

“He accomplished a lot of things for Indian country. And, you know, the beautiful thing about Indian country is there’s probably a Bill Franklin in every tribe here in California. You know, those people that were in the 1920s, 1930s trying to figure out their culture to keep it going.”

Tarango noted that he was impressed that his uncle accomplished so many things during an era when it “wasn’t OK or easy to be Indian.”

“It’s easy today to be Indian, you know, depending on what that means to you,” he said. “But to have known somebody that was doing this when it wasn’t easy, you have a different respect for him.

“I would definitely describe him as a leader. He definitely was a spiritual leader. But he was a community leader, as well, because he just didn’t do things for himself.”

Tarango added that for him, Franklin was like a rock star.

“He was an icon, and I still have his signature,” he said. “I had him sign my poster from over 30-some years ago, you know? And I still have it at my mom’s house. But I mean, to me, even though I was related to him, like you still feel honored to be related to somebody like that.”