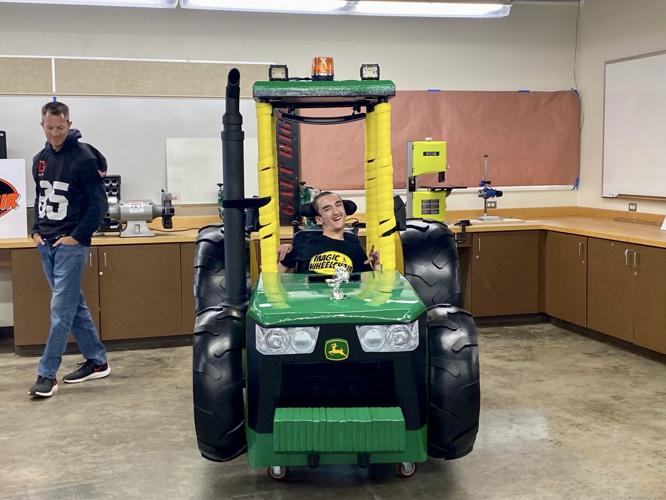 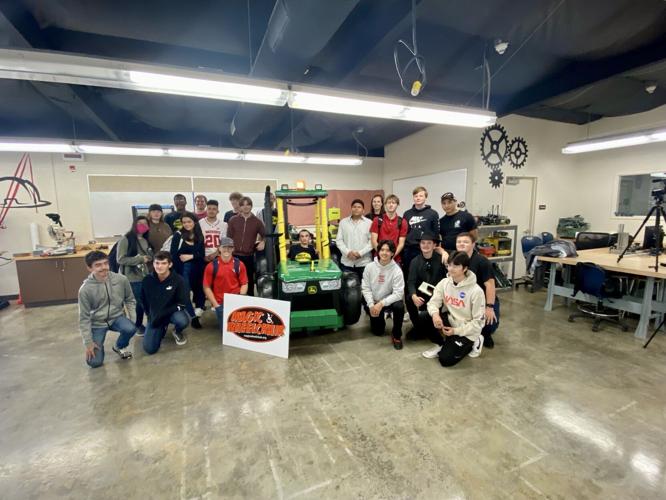 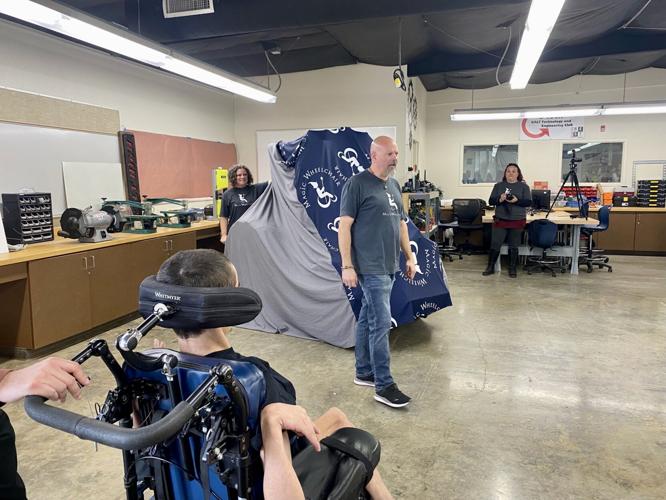 A Galt High School student has had his wheelchair transformed into a bright green tractor, just in time for Halloween. And it was thanks to his classmates and a nonprofit that promotes inclusion for children who use wheelchairs.

Engineering students and volunteers with Magic Wheelchair revealed the tractor costume to Christopher Sheldon on Oct. 28. Christopher waved his arms in excitement at the John Deere-inspired creation, which has spinning wheels, flashing lights and multiple other features.

Engineering and technology teacher Brooke Beckett said the students designed the tractor based on Christopher’s interests, in particular a farming simulator video game that he enjoys.

They also accounted for his physical abilities. For example, the costume can play various honks and engine noises; since Christopher has more strength in his legs than his arms, he can activate the sounds by pressing buttons with his feet.

The costume fits around Christopher’s wheelchair, and it can be easily disassembled to pass through doorways.

Cory Hunt, a senior builder with Magic Wheelchair, and a group of volunteers partnered with the students to make the plans a reality. Hunt has a background in theater and formerly directed a haunted house in Ione.

“I like the idea of the costume being transformative. It’s a powerful thing,” Hunt said.

Magic Wheelchair projects, and the costume for Christopher, present unique challenges that the team learned to address, said Hunt, who had to study up on tractors for the project. The wheels were the most difficult element of the build, needing to be shaped out of two kinds of foam and then painstakingly painted to reach the right shade of yellow.

The project was funded through a call for donations from the community, which Beckett called a “huge success.”

The fundraiser collected $3,845, several times its goal of $1,000. And Beckett said the money they didn’t spend on Christopher’s costume goes to other Magic Wheelchair projects to benefit other children.

“It was nice that our success helped other students,” Beckett said.

Fred Sheldon, Christopher’s father, said the family has occasionally gotten creative for his son’s Halloween costumes. In past years, Christopher has been a diver in a shark cage and Darth Vader in a “Star Wars” TIE fighter.

“This is the most creative we’ve ever gotten,” Sheldon said, later adding, “I think he’s really stoked to go trick-or-treating on Monday.”