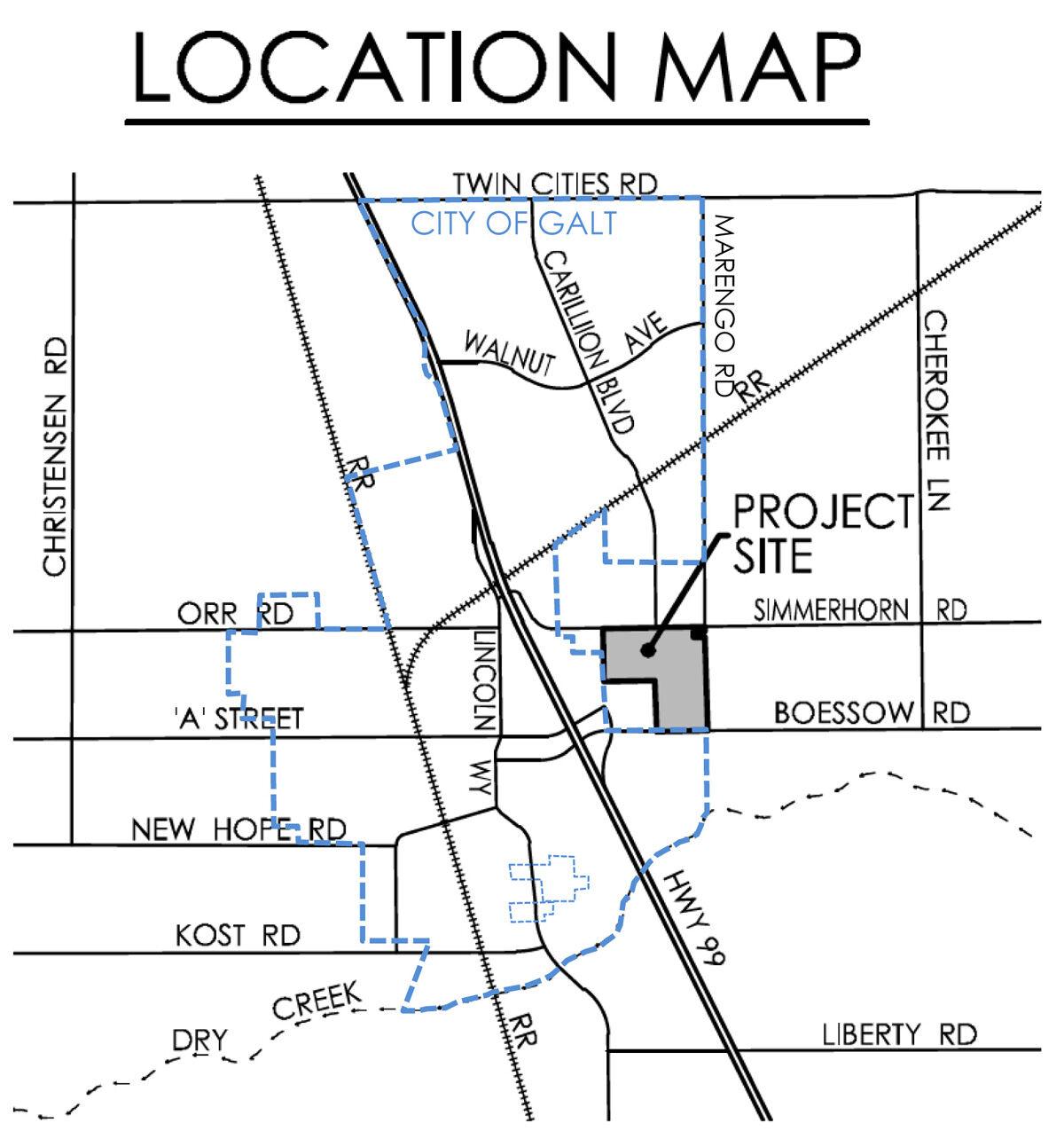 The Simmerhorn Ranch development is located in Sacramento County and requires annexation into the city. The project sits between Simmerhorn and Boessow roads to the north and south, and Marengo Road and city limits to the east and west. 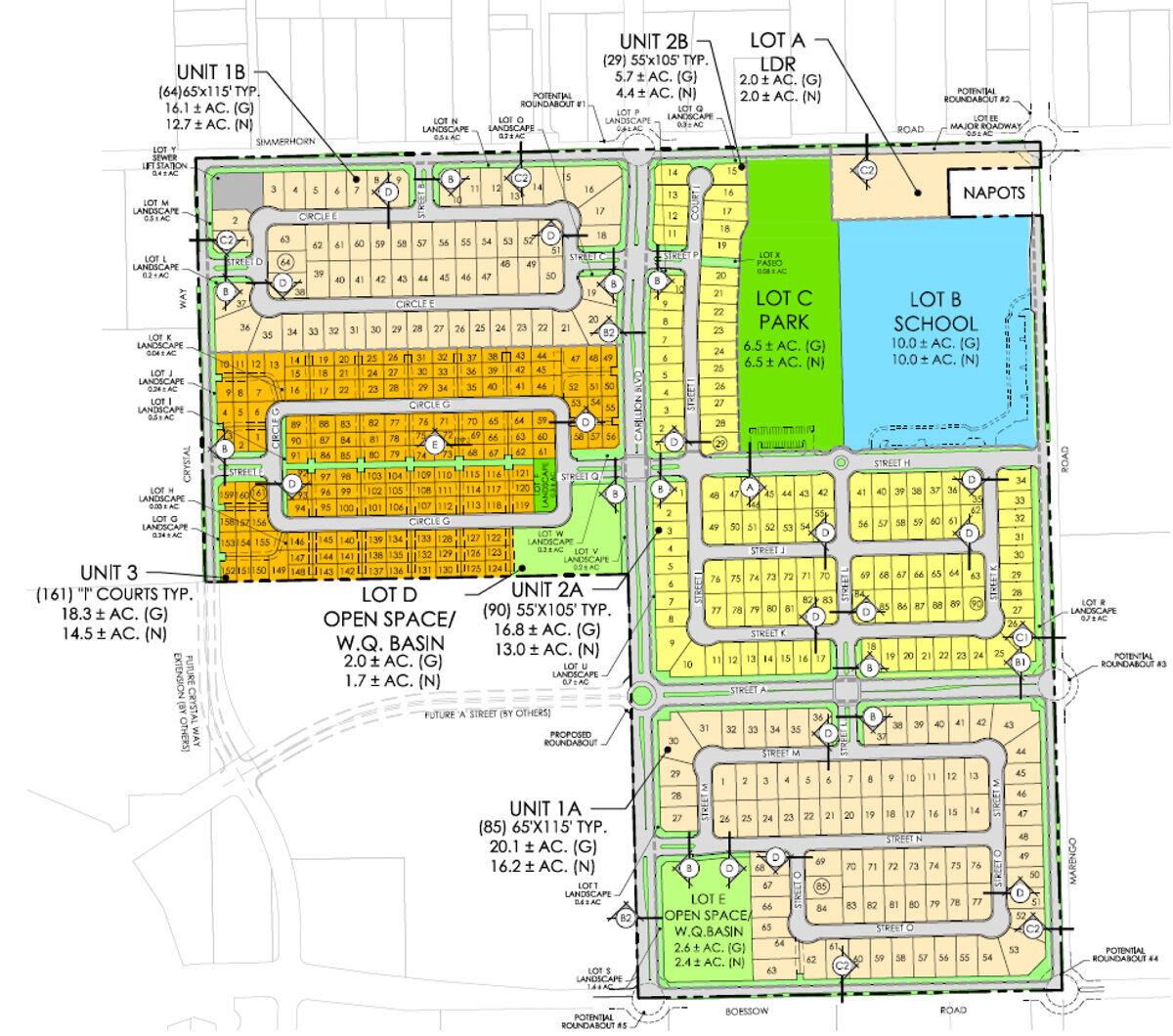 Galt Planning Commissioners have asked Elliott Homes to relook at the ‘I Court’ subdivision, shown in orange, of the its new proposed development.

The Simmerhorn Ranch development is located in Sacramento County and requires annexation into the city. The project sits between Simmerhorn and Boessow roads to the north and south, and Marengo Road and city limits to the east and west.

Galt Planning Commissioners have asked Elliott Homes to relook at the ‘I Court’ subdivision, shown in orange, of the its new proposed development.

At a special Galt Planning Commission meeting Thursday, July 23, planning commissioners asked Price Walker of Elliott Homes to reevaluate the higher density portion of the developer’s Simmerhorn Ranch project, a suggestion that was met with receptivity from the developer, but resistance from city staff.

According to Galt Community Development Director Chris Erias, I Courts are a cluster of several single-family homes that share a common drive aisle or alley, and may also be referred to as “six-packs” or “four-packs” depending on the amount of lots that connect to the drive aisle. The proposed I Court houses are all single-family detached homes.

“I Courts are an increasingly popular medium density product type, as typically the homes that are directly adjacent to the residential street preserve a traditional streetscape by orienting front doors to face the street, while the second and third row of homes are oriented to and accessed by the common drive aisle,” Erias said.

Commissioners appeared to be okay with most of the proposal; however, they all questioned the I Court portion.

Walker had said earlier in the presentation that Elliott Homes originally wanted the entire project to be lower in density but, after discussions with city personnel, changed the project to include the medium and medium-high density homes.

“Honestly we probably would have liked a lower density than the project ended up,” said Walker, who is vice president for project development for Elliott Homes. “But Chris (Erias) again was diligent in his persuasion, and we kept the medium density in the project. Overall, we think it’s a really good project that the city will be proud of.”

After hearing concerns from residents during public comment and having a few concerns of their own, commissioners asked Walker if it would be possible to change the I Courts to something less dense.

“I could see us coming back with something we are all more comfortable with, such as Veranda,” Walker said. “We were having difficulty with that design reaching the medium density that we were required to meet and that’s how we came up with the I Court. I don’t need to die on the sword for these I Courts; we are willing to do something else there.”

However, Erias had something to say about that.

“You can’t,” Erias said, pointing out that they must follow the General Plan, which calls for medium density housing at that site. “Price knows that we’ve been down this road before. I want to say that, in addition to being consistent with the General Plan and what was proposed for this area, we are required by the state of California to provide a variety of housing types, including density, and Galt cannot escape that.”

Erias further explained that, if Galt tries to reduce density requirements, the city could open itself to litigation and be in the “state dog house”, possibly becoming ineligible for grants and other future benefits from the state.

“As your city planner, I would not allow him to remove this medium-high density from the plan and again, for two reasons; one, it was a vision in the general plan, which we view as our marching orders from the Council and the community at the time this general plan was made. And then, two, it is a state requirement and we could get in trouble with the state by reducing our density.”

But despite Erias’ explanation, commissioners asked Walker if the I Courts could be changed to something closer to the Veranda project.

“I could certainly look at it,” Walker said, “and could do that rather quickly. I have a pretty good guess that we would lose some density. I could work with Chris on a really quick layout. We could do that exercise to see and have that answer for you.”

Walker said he would have the additional design request available for the Planning Commission’s Aug. 13 meeting, at which commissioners are expected to determine a recommendation about the project for City Council.

In addition to the 429 homes, the project also includes a 10-acre school site, a 6.5-acre park site and two water quality basins, as well as large landscape corridors and bicycle and pedestrian connections throughout the project.

The Simmerhorn Ranch development is located in Sacramento County and requires annexation into the city. The project sits between Simmerhorn and Boessow roads to the north and south, and Marengo Road and city limits to the east and west. The housing project consists of 120 acres; however, additional properties are being included in the annexation, bringing a total of 350 acres into Galt.

Elliott Homes is hoping to have the project for a Council decision in September, hoping to get it to LAFCo for annexation approval by November 2020.