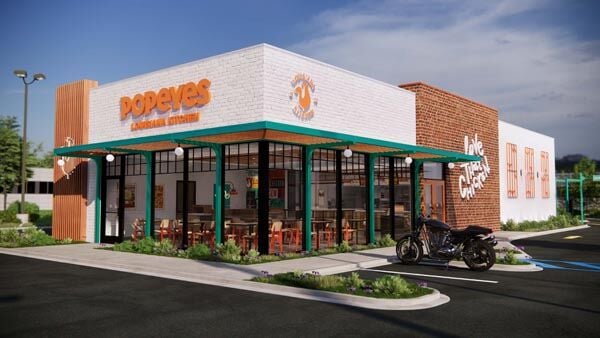 A rendering shows the exterior of the planned Popeyes Louisiana Kitchen on Simmerhorn Road.

A rendering shows the exterior of the planned Popeyes Louisiana Kitchen on Simmerhorn Road.

The Seasons at Caterina Estates project on the southwest corner of H Street and Joy Drive will comprise 61 single-family homes. At the commission’s Oct. 14 meeting, homebuilder Richmond American provided four floor plans, each with three possible elevations or exterior looks.

Every house will have a street-facing sitting area “to promote outdoor living and pedestrian activity,” associate planner Kristyn Bitz said in a presentation.

In a first for Galt, one of the models will feature an RV garage, which is large enough to accommodate a recreational vehicle, boat or trailer.

Commission Chair Keith Jones spoke at the commission’s September meeting about the issue of adequate storage space for Galt residents who own boats or RVs, and not long after, Richmond American submitted its plans, Community Development Director Craig Hoffman said.

With its 5-0 vote, the commission also asked city staff and the builder to work on adjustments to the designs requested by Jones, such as greater variation in the paths to the front doors.

In July, commissioners gave design approval to another Richmond American project, Seasons at the Farm, south of Kost Road. The builder has developments in a dozen states, including Laguna Ranch and Seasons at Stonebrook in Elk Grove.

Design plans for a Popeyes at 965 Simmerhorn Road also got unanimous approval at the meeting.

Envisioned for the empty plot east of Mr. Pickle’s Sandwich Shop and the Chevron gas station, the fried chicken restaurant would encourage customers to make their orders online, the franchise owner told the commissioners.

“We learned a lesson from COVID — a very, very big lesson — that a lot of traffic is moving to digital,” said Sunny Ghai, who owns multiple Popeyes and Burger King locations in the Sacramento area.

Ghai said food ordered on the Popeyes app would only be prepared once the customer is five minutes away from the restaurant, to ensure the food is still hot when picked up in the drive-thru. The system will speed up drive-thru traffic, Ghai said.

At a request from Commissioner Daniel Denier, Ghai agreed to work with the city on adding a hedge or chain-link fence to the east side of the property.

The meeting ended with items related to land use, particularly a presentation by city attorney Annie Branham on the many new state-housing laws. Branham focused on a law that, under certain circumstances, allows a maximum of four units to be built on a single-family lot.

When Senate Bill (SB) 9 takes effect on Jan. 1, 2022, it will block the city’s discretionary review of certain lot splits. A lot zoned for single-family residential could be divided in two, and then two units could be built on each of the new lots, creating four units in a previously single-unit space.

Branham described a web of caveats. For example, the applicant must sign an affidavit promising to live in one of the units for at least three years, and existing dwellings cannot be removed without permission. Additionally, the new lots and structures still need to comply with the city’s objective building standards. Branham anticipated legal challenges to the law.

During the commissioners’ comments, Jones and Denier expressed interest in seeing which plots in Galt could potentially be split under SB 9.

The commission will revisit the new laws at its next four meetings.