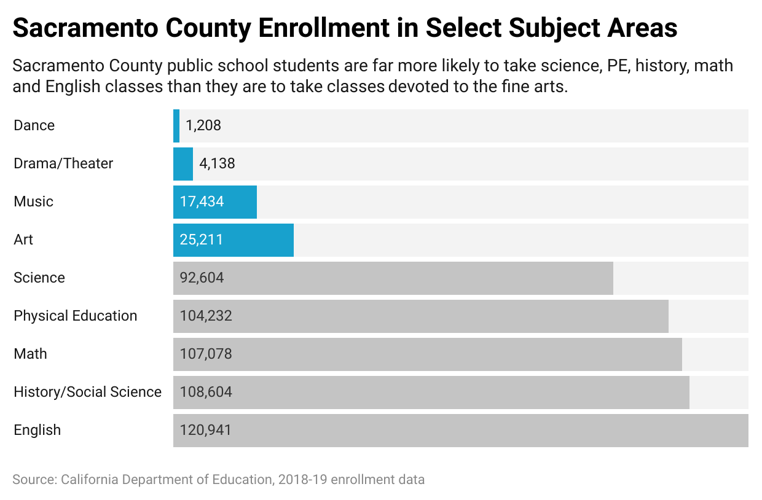 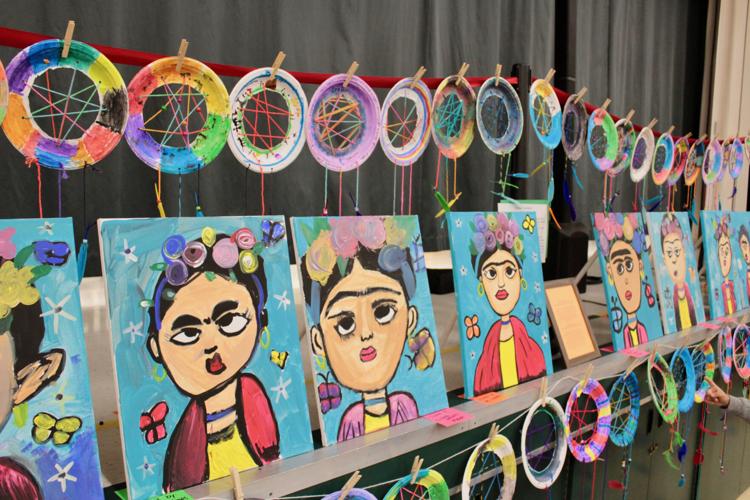 Student art pieces are displayed during a showcase at Valley Oaks Elementary School in May. If passed, Proposition 28 would mandate a minimum level of arts and music funding.

Student art pieces are displayed during a showcase at Valley Oaks Elementary School in May. If passed, Proposition 28 would mandate a minimum level of arts and music funding.

Tony Rodriguez and Cameron Salerno are students in the journalism program at California State University, Sacramento. They are being taught by Phillip Reese, a Sacramento Bee staff reporter and an assistant professor at CSUS. For more information about the CSUS journalism program, visit fb.me/sacstatejournalism.

Valley Oaks Elementary School music teacher Omar Anzaldua has taught in several districts — and has fought for funding in almost every one.

“I went and bought a bunch of buckets at Home Depot so that we can do a bucket band,” Anzaldua said. “It really is a fight, scraping and trying to claw away from anywhere you can.”

Help for Anzaldua and other teachers could be on the way in the form of California Proposition 28, a November ballot initiative that would increase funding for arts and music education for K-12 students in Galt and the rest of California.

The measure, if passed, would mandate that the equivalent of 1% of state funding allocated to schools under Proposition 98 be used for arts and music education. Schools would have to spend that money, which would be around $1 billion annually, primarily on hiring arts and music instructors.

Anzaldua said he wishes there were more funding to buy new equipment and repair some instruments that his students are already playing.

“I understand the prop is to hire the teachers, which is the biggest investment,” Anzaldua said. “Then, continue the funding for buying new equipment. Some of my students have been playing on instruments that are older than I am.”

The pandemic shutdown hit arts and music education hard as students spent long periods of time in virtual classrooms, according to Austin Beutner, the superintendent of the Los Angeles Unified School District. “It's more timely now than ever.”

“Arts and music are part of an essential education,” he said. “Every kid should have an opportunity to participate in arts and music.”

He added, “They universally want this. The entire school community is supporting it. … The students are excited about it.”

Proposition 28 has no formal, organized opposition. However, Lance Christensen, a candidate for California State superintendent of public instruction, is against it and said it takes away money from the wrong places. Christensen says a lot of what happens with art programs has to do with administrative decisions.

“If they really wanted arts and music in the classrooms, they could get it done overnight,” Christensen said. “It would be done tomorrow. It's just not a priority for them.”

There are ways to make this happen without increasing ballot box budgeting, according to Christensen.

“If you really want to improve arts and music, [colleges must] change their A-G requirements,” Christensen said. “Make the districts really consider that hard so you’re not just saying it’s good because it’s art and music.”

Nayeli Chaidez, a parent to a fifth-grade student at Valley Oaks, said Proposition 28 is an easy yes for her.

“It's not going to cut from any other programs … It just makes sense,” Chaidez said. “There's so so much surplus” in the state budget, she added.

An emphasis on arts education helps build confidence in students. According to Chaidez, music and arts education is just as important as other areas of study and deserves extra funding.

“I think it all ties together; then they carry it over to the other subjects,” Chaidez said. “It could do that for a lot of kids when it's provided through school.”

“Music is an important part of every culture in the world,” Redfield said. “(It) has been throughout history, a powerful universal language and notation system, a positive emotional outlet for young people … a subject that has its greatest success when it is introduced at an early window of opportunity, much like language acquisition.”

Redfield oversees Sacramento State’s music teacher preparation program. He graduated from Sacramento State and has been in music education for 36 years. He has taught music every level from kindergarten through graduate school. His entire family are educators.

“If more funding is provided for arts education, especially if that funding is directed to the hiring of more music educators, then it stands to reason that more students will have an opportunity to study music.”

Carson March, a 23-year-old Sacramento resident who recently graduated from the University of Hawai’i, said the music and arts classes he took shaped him into who he is today. He said other students should have the same opportunity.