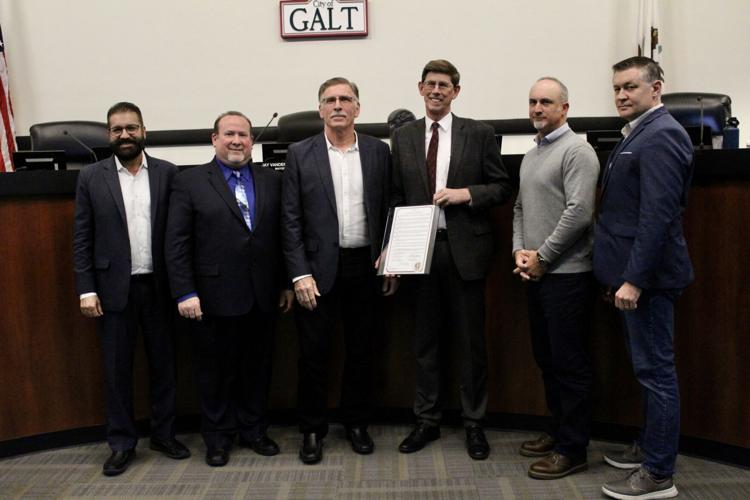 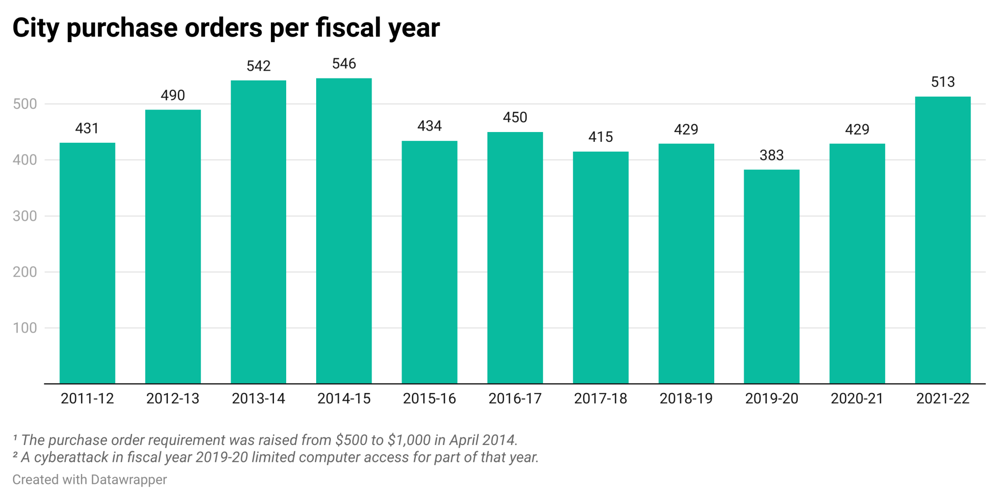 The number of purchase orders per fiscal year over the past decade. Recently, the numbers have trended upward. Finance Director Matthew Boring told the Herald that, as of Jan. 20, 2022-23 purchase orders are trending about 11.7% higher than at the same time last fiscal year.

Selected changes to the procurement policy, approved by City Council. Each dollar amount marks the lower threshold at which an approval level or quote procedure becomes required.

The number of purchase orders per fiscal year over the past decade. Recently, the numbers have trended upward. Finance Director Matthew Boring told the Herald that, as of Jan. 20, 2022-23 purchase orders are trending about 11.7% higher than at the same time last fiscal year.

Selected changes to the procurement policy, approved by City Council. Each dollar amount marks the lower threshold at which an approval level or quote procedure becomes required.

Multiple commenters demanded action on homelessness at the Jan. 17 meeting of the Galt City Council, saying they feel less safe in their neighborhoods and places of work. Also at the meeting, Council reviewed a cannabis public-outreach plan; approved, by a split vote, new approval thresholds for city purchases; and heard a funding request from the chamber of commerce.

Four people came forward during public comment to say they want the city to do more to address homelessness. Local business owners Kaci Boyd and Rodney Hilaman said the presence and behavior of homeless people had made them and their employees feel less safe.

“The day-to-day operation of my business is impacted with the homeless that are living in the (Galt Plaza) shopping center,” said Boyd, an insurance agent. “They are frequently sleeping in front of my office, digging through the trash cans, yelling, knocking on our windows” and behaving disruptively inside the office. She said she needed to know the city would take “actionable steps” and remove homeless people when a problem is reported.

Other Galt residents, Pamela Ochoa and Ruby Cornejo, also spoke. Ochoa raised public health and environmental concerns, saying she and her neighbors near the San Joaquin County line had seen hypodermic needles and campfires. Saying she has “mercy for the homeless,” Ochoa continued that she is “here to help.”

Cornejo said homeless people present a danger to children and that they should be arrested if they do not seek services offered by Sacramento County. She distributed a list of county services to the council members.

Council Member Shawn Farmer thanked the commenters; he noted that the city and police have already taken some actions to remedy the issue but that they often feel as if their “hands are tied” by state laws.

Farmer later said he was tired of the city being “reactive” to homelessness. Mayor Jay Vandenburg suggested having city staff put together a report on legal options for the city, gaining a consensus in support. Farmer added that the report should include actions already taken.

Responding to a request from the previous regular council meeting, City Manager Lorenzo Hines Jr. presented a proposal for public outreach regarding the city’s cannabis policy. Galt prohibits commercial cannabis businesses; Council decided last year to revisit the stance but has not made any official decisions yet.

The plan includes commissioning a scientific survey of residents’ opinions on legalizing cannabis sales, two town hall meetings (one on each side of the city) for people to discuss and ask questions, an “ad hoc community roundtable” with the city manager, and informational posts on the city website.

Several public commenters shared their opinions on legalizing cannabis sales. Those in favor said it would trigger economic activity and help people who use cannabis for medical reasons. Those opposed were concerned having a cannabis dispensary would harm children.

The council members commended the outreach plan and encouraged community members to keep expressing their views on the matter. Vice Mayor Paul Sandhu suggested having more town hall meetings. With a consensus in support of the plan, city staff can proceed with putting it into action.

Council split over whether to increase the thresholds at which certain officials must sign off on purchases. Staff proposed in December raising the thresholds as a way to make city operations more efficient.

Finance Director Matthew Boring told Council that inflation and other factors mean the purchase limits, which had their last comprehensive update in 2012, no longer allow staff to act as quickly as they would like when they need various equipment.

Any purchase greater than $30,000 needs Council’s authorization, and the heads of the Galt Police, Public Works and Parks and Recreation departments said having to wait to get onto a Council agenda makes time-sensitive purchases, particularly vehicles, harder to complete. The new threshold for Council approval would rise to $70,000 in the staff proposal. Other limits also rise. The policy regulates who approves purchases and how quotes are gathered, but departments must stay within the funds allocated to them in the budgeting process.

Farmer and Sandhu acknowledged the need to raise the limits but said staff’s proposed increases were excessive; they wanted to be able to review purchases beforehand rather than assess them after the fact. They also noted that inflation, though high, is lower than the increases. Boring said this is in part to ensure the new policy does not need to be revised for several years.

Vandenburg and Council Members Rich Lozano and Kevin Papineau supported the proposal as presented, and the policy passed 3-2.

Representatives of the Galt District Chamber of Commerce requested that the city give it the remainder of pandemic-relief funds allocated for small businesses, in order to create a city visitors center.

The city allocated $1.3 million in funds that it received through the American Rescue Plan Act for grants to small businesses affected by COVID-19. After two rounds of applications, there is about half a million dollars left over, and staff plans to recommend a use for it at a future council meeting. Chamber members said their organization could make the best use of that money by creating a visitors and conference bureau that would attract tourism and, by extension, tax revenue.

Hines told Council he has a meeting scheduled with a chamber representative.

The city presented former Sacramento County Supervisor Don Nottoli with a resolution recognizing his contributions to the local community throughout his career as a public servant. Nottoli has represented District 5, which includes Galt, since 1994.

Council members made appointments to city committees and commissions. In several cases, the city received fewer applicants than there were open seats. The Beautification and Public Safety committees still have one vacancy each; the Youth Commission was looking for four adult mentors but received only one application, from Jessica Goerzen.

This article has been edited to clarify the respective statements made by Pamela Ochoa and Ruby Cornejo during public comment.