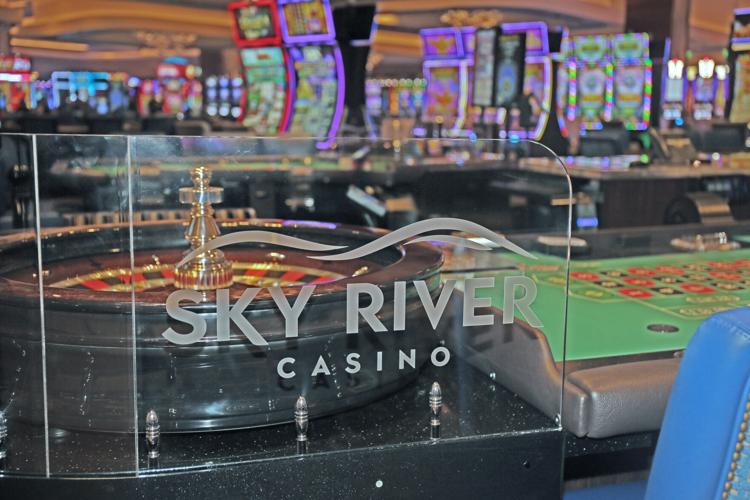 The Sky River Casino had its soft opening on Aug. 16. 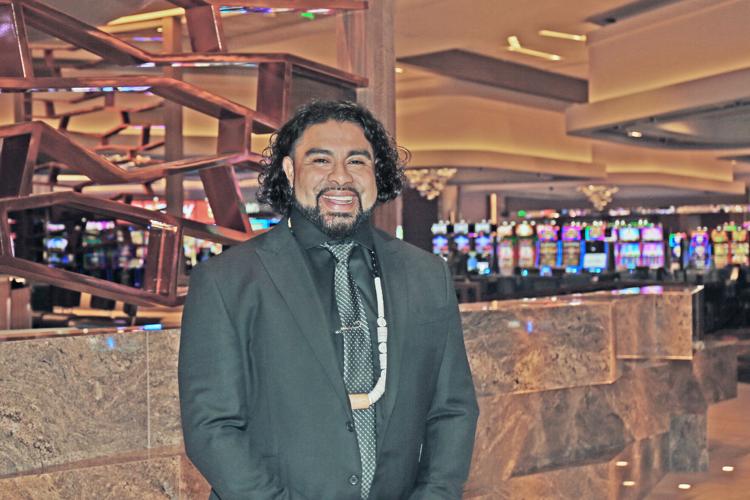 Jesus Tarango, the chair of the Wilton Rancheria, stands inside the Sky River Casino. 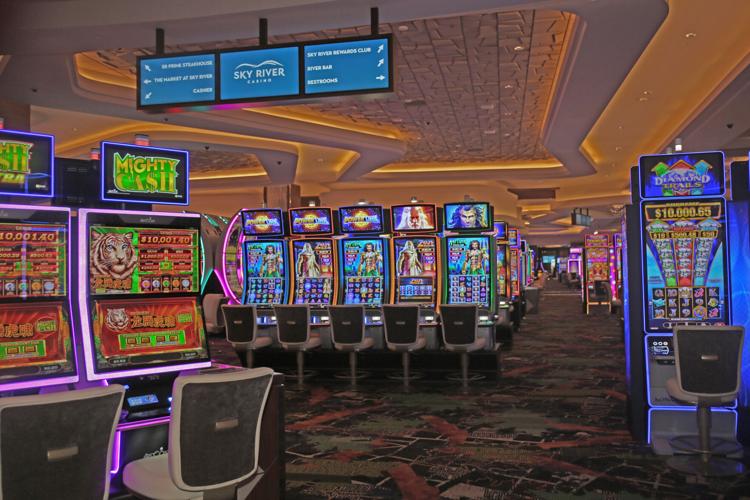 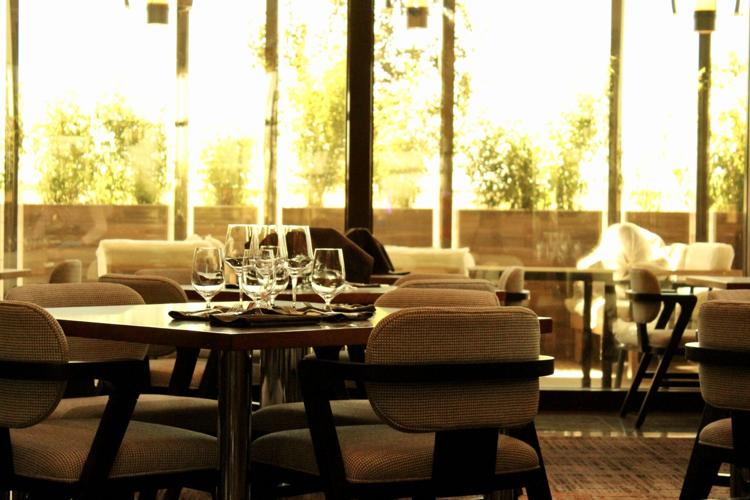 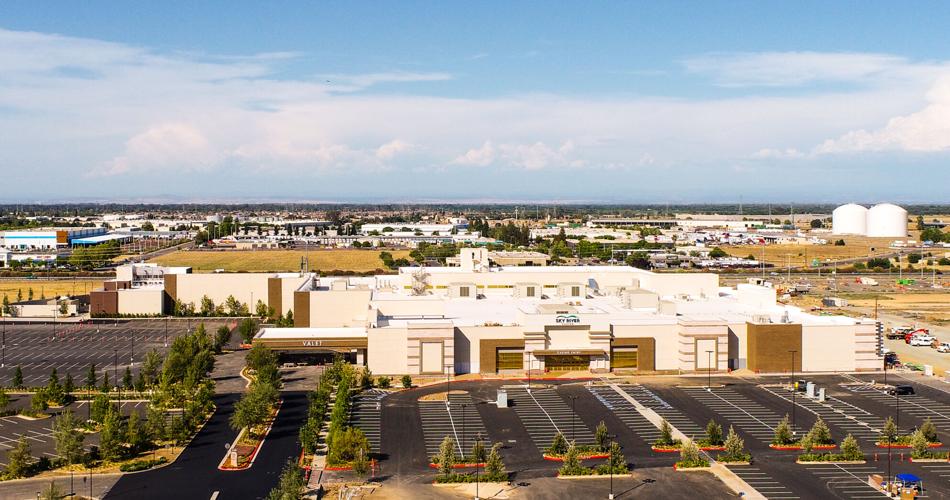 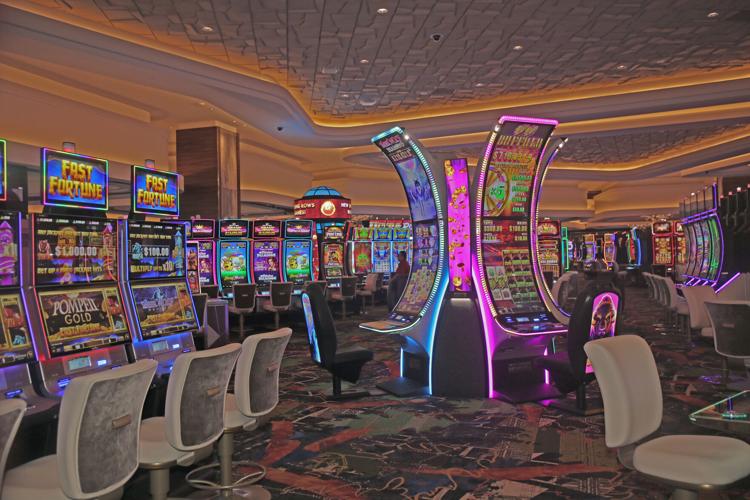 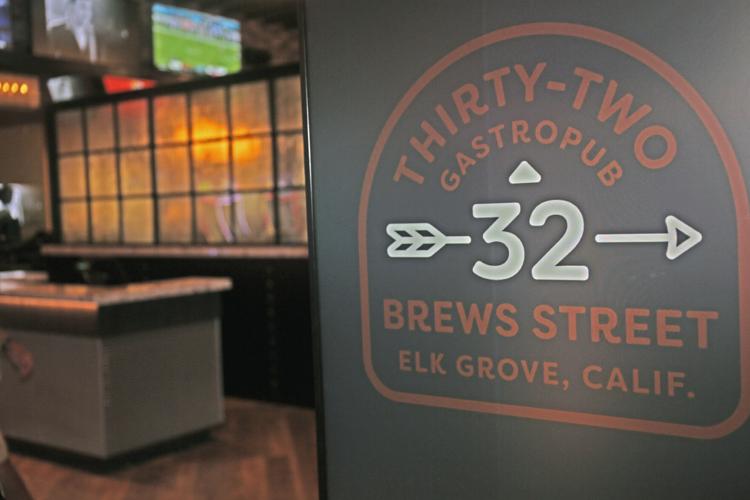 32 Brews Street is a sports bar that carried local beer and will be open 24 hours a day. 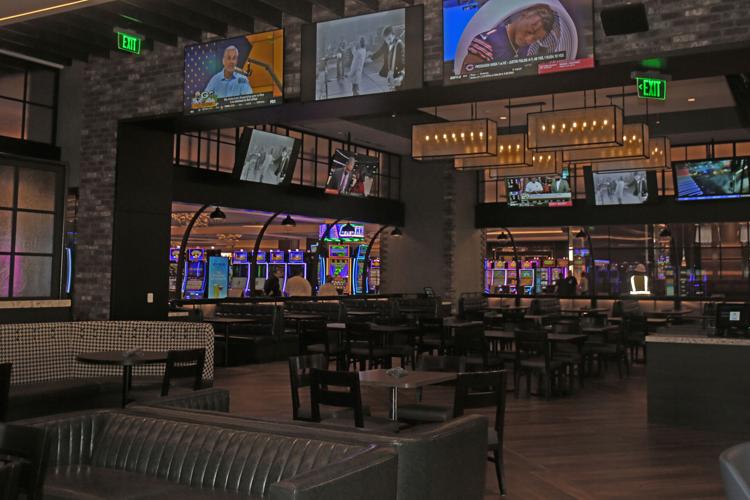 The Upper Barrel is a wine bar that’s decorated with wine barrels on its ceiling. 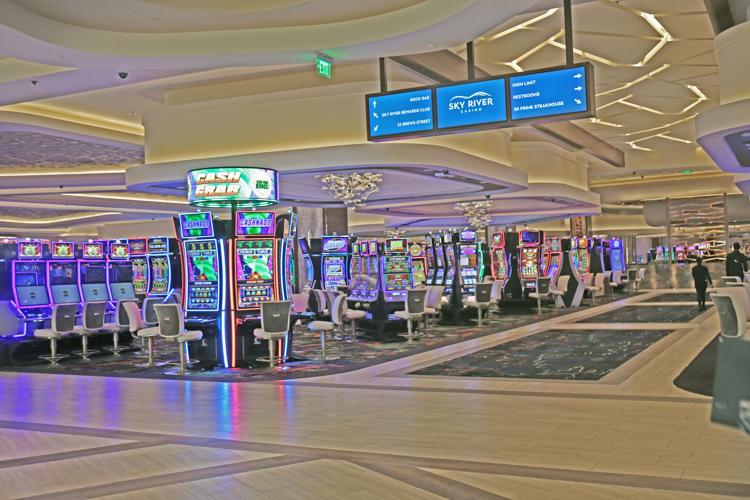 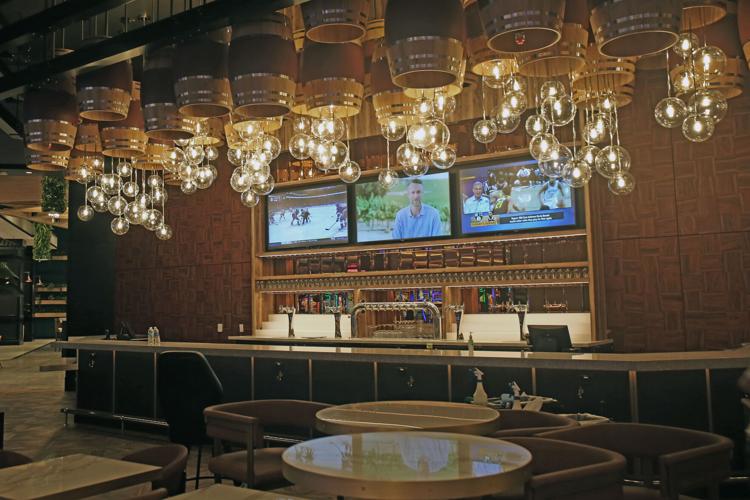 A centerpiece of the casino is The Market at Sky River, a food hall that has 12 small restaurants and bars. 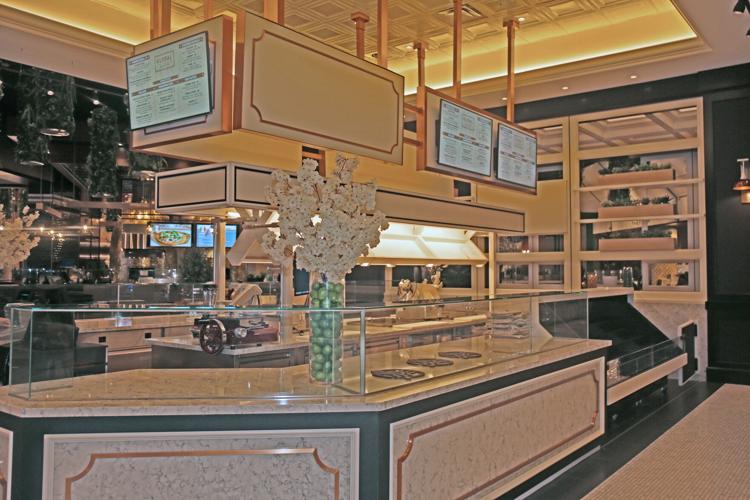 Views of the Sky River interior 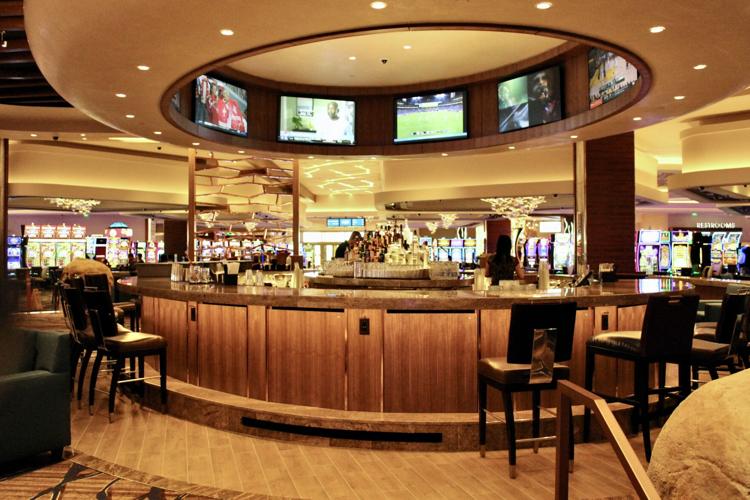 A circular bar at the center of Sky River’s gaming area is set up to serve guests.

The Sky River Casino had its soft opening on Aug. 16.

Jesus Tarango, the chair of the Wilton Rancheria, stands inside the Sky River Casino.

32 Brews Street is a sports bar that carried local beer and will be open 24 hours a day.

The Upper Barrel is a wine bar that’s decorated with wine barrels on its ceiling.

A centerpiece of the casino is The Market at Sky River, a food hall that has 12 small restaurants and bars.

Views of the Sky River interior

The Sky River Casino, a $500 million complex owned by the local Wilton Rancheria and operated by Boyd Gaming, is now open in Elk Grove.

The casino staff made a surprise announcement about its soft opening on Facebook after midnight on Aug. 16. “Psst…you up? We’re open,” they stated in a post that featured a photograph of activated slot machines. Sky River officials announced last month they were opening in September.

Hanna Baumann, a spokesperson from the casino’s public relations firm, Cinch PR, told the Herald that casino officials decided to open to the public during the late evening of Aug. 15. They still plan to hold a grand opening in mid-September, she added.

Sky River sits at a 36-acre lot along Highway 99 in south Elk Grove, and its main entrance is at the corner of Promenade and Sky River parkways. It is Sacramento County’s first Indian casino.

Plans are to have the casino operate 24 hours a day, seven days a week. The casino’s 110,200-square-foot gaming floor has 2,000 slot machines and 80 game tables, along with 17 planned restaurants and bars.

Ground was broken at the casino site and the Sky River name was introduced in March 2021. This facility opened a few months ahead of schedule this summer.

“That’s what you get when you get a good partner with Boyd Gaming,” Wilton Rancheria Chair Jesus Tarango said about the fast construction on Aug. 15. “They’ve been in the game; they know how to do it.”

Sky River was built at the former site of the “Ghost Mall,” or the partially built Outlet Collection at Elk Grove mall, which sat abandoned for 11 years before being demolished in 2019 after Boyd Gaming purchased its land.

Just under 2,000 employees will work at the casino when it opens, said Chris Gibase, Sky River’s chief operating officer.

“Our training is complete, we have everybody in place,” he said.

The Herald toured Sky River during the day before the casino’s soft opening. This casino’s gaming floor was filled with hundreds of activated slot machines. A few restaurants, such as the upscale SR Prime Steakhouse, had their tables set up. Several gaming floor employees underwent training while construction workers put the finishing touches in areas like the high-limit gaming room.

Some of the interior decorations were influenced by natural images in the local region, such as glass chandeliers shaped like acorns and a jagged ceiling pattern that’s based on the Cosumnes River’s dry riverbed, tour guide Roni Phillips explained. Unlike many casinos, Sky River’s entrances have large windows to let in sunlight.

A centerpiece of the casino is The Market at Sky River, which is a 400-seat food hall that has 12 small restaurants and bars, including a sushi bar created by Billy Ngo, who owns acclaimed Sacramento restaurant Kru Contemporary Japanese Cuisine. Diners at the Market can use a smartphone application to place orders and have them served at their table in the hall.

On the other side of the casino is 32 Brews Street, a large sports bar that carries locally brewed beer and will be open 24 hours a day.

Gibase emphasized the casino’s dining options as one of Sky River’s main draws.

“If you’re a foodie, if you like craft beer, if you like wines, this is the only place where you can get them all in,” he said.

Smoking will be allowed in the gaming room, but Gibase noted that the floor has vents that are designed to push cigarette smoke toward the ceiling. This is in contrast to typical ventilation systems with ceiling vents that blow downward.

“So if I’m smoking a cigarette next to you, you shouldn’t smell it,” Gibase said. “(The smoke) should go straight up and out.”

Regarding the casino’s traffic impacts on local streets, he said the casino has an “extensive traffic plan” in place.

Asked about the casino’s security system, he replied that Sky River has a security staff that works with the California Highway Patrol and local police agencies. The casino’s parking lot has several security cameras installed.

As for the casino’s future, Gibase said that Sky River can evolve into a Las Vegas-style casino-resort. Boyd Gaming also owns a vacant 64-acre lot next to the casino.

“If you look, all four sides of this building are capable of expanding,” Gibase said. “So you can expect a large hotel, entertainment complexes, showrooms, spas, pools — pretty much everything you would see in a Las Vegas Strip hotel will be on this property. This will be an economic driver for not only Elk Grove, but for Sacramento County.”

In later comments, Gibase said that the casino has no immediate plans for a shuttle service that would help transport people in other communities, such as Galt, to the casino, but he said it is accessible with public transportation.

Elk Grove Mayor Bobbie Singh-Allen and other local elected officials were invited to a preview of the casino on Aug. 11. She said that the casino will make the city a tourist destination.

“Once you walk through the doors, you are transformed to someplace else,” she told the Herald. “I am happy for the Wilton Rancheria who have been waiting for this historic moment for decades. The revenue will help tribal members with jobs, access to higher education, and more.”

During the media preview day, a few dozen chairs were set up in the valet parking area for Wilton Rancheria’s elders and other members for a private ceremony held later that day. Sky River’s opening follows a decade of planning, legal challenges and COVID-related project delays for the tribe and Boyd Gaming.

The Wilton Rancheria reached a historic milestone when it regained its federal tribal recognition status in 2009 after it was terminated for 50 years. However, the tribe did not have land of its own until 2017 when the U.S. Department of the Interior placed its proposed Elk Grove casino site into a federal trust.

At the 2021 groundbreaking, Tarango said that revenues from the casino will help his tribe provide housing, education, and healthcare resources for its 853 members. On Aug. 15, he described his feeling of being at the casino as a “homecoming” to the Wilton Rancheria.

“When you think about who we are as a people, you really can’t have a community unless you have a land base,and this is the only land we have that’s in trust status for us,” Tarango said. “Today is a beautiful day because it’s almost as if our people are coming home and we have a place to call home. It truly should do what it’s supposed to do - it’s supposed to take us into self-sufficiency and provide us with an economic boost.”