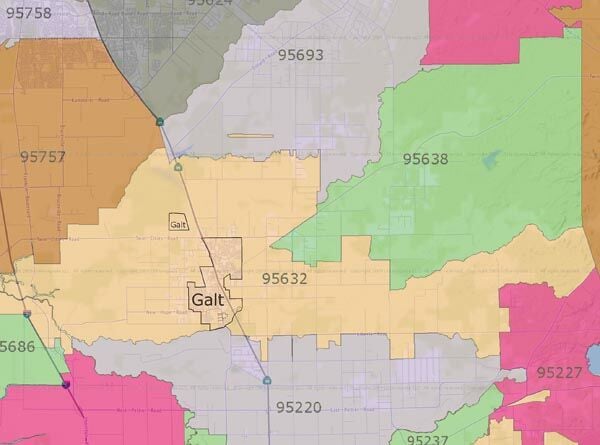 The city of Galt is but a fraction of the area within the 95632 zip code, however when calculating the COVID positivity rate, county officials are including the positive cases within the entire zip code, but only using the city of Galt’s population. 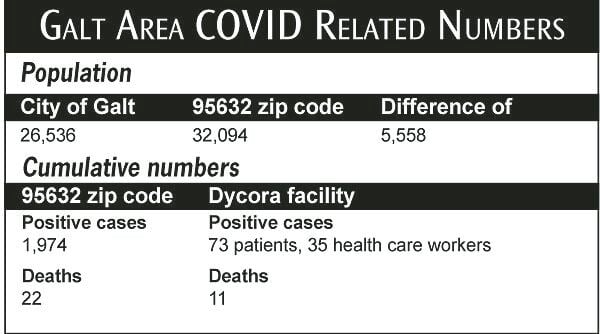 Data was acquired through the U.S. Census Bureau website; other data was provided by the California Department of Health and zip-codes.com.

The city of Galt is but a fraction of the area within the 95632 zip code, however when calculating the COVID positivity rate, county officials are including the positive cases within the entire zip code, but only using the city of Galt’s population.

Data was acquired through the U.S. Census Bureau website; other data was provided by the California Department of Health and zip-codes.com.

Perhaps one of the most polarizing issues to face Americans since the Vietnam War, COVID-19 has pitted neighbor against neighbor, and Galt residents and business owners are not immune from this division.

For months now, proponents on both sides have argued about masks, compliance, business closures, job loss, comorbidities and legitimacy of reported numbers.

Just last week, a local news television station ran a story about Galt using provocative words such as “hot spot” and “surge”, using data reported by Sacramento County to back up its claim.

But what are those numbers and what exactly do they mean?

The Galt Herald has been corresponding with the Sacramento County public health information officer and other county officials for over three weeks, seeking responses to questions that those officials couldn’t answer and, in some cases, wouldn’t answer.

A look at the numbers

Currently, the Sacramento County Public Health Epidemiology COVID-19 Dashboard reports that Galt has 1,974 cumulative positive cases and 22 cumulative COVID related deaths since March. According to the website, that puts Galt at a 7.694 positivity rate, the highest positivity rate in the county.

Digging deeper into the numbers

So, just exactly where are those numbers coming from? The Galt Herald has discovered that the cumulative numbers do not only include residents inside the borders of Galt, but those within the 95632 zip code, stretching into San Joaquin County, increasing the potential number of positive COVID cases. (See map)

According to Brenda Bongiorno, Sacramento County Public Information Officer, individuals filling out test and lab forms are asked to provide their home address, which is then used to determine their local jurisdiction.

“Address is based on what is listed on lab report and/or provider confidential morbidity report (CMR). If city is listed as Galt, it’s attributed to Galt,” Bongiorno told The Galt Herald.

Seems simple enough; however, there are thousands of residents, over 5,500, who reside in the 95632 zip code, listing Galt on their address line, but do not reside within the city boundaries.

When asked to provide the number of positive cases outside the city of Galt, but in the zip code, the county official said they would not.

Those 5,558 county residents increase Galt’s population roughly 20%, taking Galt’s population of 26,536 to 32,094. Doing a little math, The Galt Herald discovered that, when calculating the positivity rate, the county has been using the overall positive cases in the zip code, but using the city proper’s population to find the rate, not the zip code population. Using the appropriate numbers, the Galt area positivity rate drops from 7.694 to 6.15. And, although still significant, that new equation drops Galt from the highest infection rate to below the city of Sacramento.

According to the California Department of Public Health, in addition to 35 health care workers, the Galt facility has had 73 patients test positive for COVID and, of those patients, 11 have died. The patients’ positive test results, as well as the deaths, are included in the city of Galt’s cumulative numbers.

Those 11 deaths are half of the deaths for the entire zip code.

Dycora has the capacity to have up to 99 residents; however, according to Co-founder and Chief Executive Officer of Dycora Transitional Health & Living Julianne Williams, M.P.H., since the pandemic, the Galt facility has kept their occupancy numbers lower than normal, to help slow the spread.

“Our staff at Dycora Transitional Health – Galt are fully committed to the health and safety of our residents, especially as we all experience this COVID pandemic,” Williams, said. “We are truly saddened each time a resident or employee contracts the virus. As you know, COVID is a highly contagious virus, can be spread easily by people who are both asymptomatic and those that have symptoms, and COVID in nursing homes is directly related to the COVID rates in the local community. We have taken all available steps to have appropriate PPE available during this most difficult time.”

The Galt Dycora campus is not alone in its seemingly high numbers; a significant number of skilled nursing facilities across the state show high infection rates, which affect the positivity rate in their respective cities; however, due to the city of Galt’s relatively small size, Dycora’s numbers deliver a heavy blow, especially when it comes to death numbers.

For another example, the city of Elk Grove also has only one skilled nursing facility. Windsor Care and Rehabilitation Center Elk Grove has had 59 health care workers test positive, 94 patients test positive, 12 of which died. With the city of Elk Grove sporting nearly 175,000 residents, 7,741 of which have tested positive and 72 having died, the Windsor facility has much less of an effect on that city’s overall infection rate.

As Dycora remains closed to visitors and is considered its own isolated community within the greater Galt community, there is little to no comingling between city residents and the Dycora community; however, Dycora’s numbers comingle with Galt’s.

Although Dycora is within the city boundaries, the state, not the city, has jurisdiction over the facility. Williams is asking the community to help support Dycora’s efforts to keep the Dycora residents safe.

“We employ approximately 90 people,” Williams said. “They care very deeply for those entrusted to them. They have been heroes, committed to care for residents during this pandemic. My hope is our community will support us in demanding skilled nursing centers are first priority for funding and PPE. We provide care to the most vulnerable, those who built the communities in which we live; please help us advocate for their care.”

We all want someone to blame

Who is to blame for the spread of COVID in Galt is perhaps the most divisive question facing residents.

Many fingers are pointed at local businesses, especially local eating establishments; however, according to Sacramento County Public Health Officials, only 7% of the COVID spread can be traced back to dine-in eating (when it was allowed), and 17% to businesses in general, and that includes small businesses all the way up to big box stores.

So, who or what is actually causing the spread? Personal gatherings in the home, according to county officials. In fact, county officials say that 64% of the spread is happening in the home. Those home gatherings can be as simple as a warm hug as packages are delivered, to college students returning home from school due to closed campuses or holidays, to large gatherings for special occasions.

But, despite the county’s own data, businesses have been asked to close again, “taking one for the team”.

According to Rachelle Herendeen, Galt District Chamber of Commerce president, this is not only unfair but also detrimental to local businesses that were just beginning to adjust to the astronomical increase in solid waste fees.

“After some businesses faced garbage fee increases over 300-500%, local businesses then turned around to spend thousands of dollars purchasing required equipment to help slow the spread of this virus, only to then be forced to close entirely, jeopardizing their business and livelihood, and the livelihood of each of their employees,” Herendeen said. “By demanding these businesses to shut down, the county and the state have demonized these businesses, sending the message to the public that they are to blame for the spread of this virus. And they clearly are not.”

Herendeen referenced social media, where the division between residents is abundantly clear.

“I saw a few weeks ago where two very vocal members of the Galt community were bashing local businesses for doing what they can just to stay afloat and keep their workers employed,” Herendeen said. “One of the women called those eating in restaurants ‘ignorant’, implying that a COVID outbreak would happen at each table. Clearly the data shows otherwise, and yet our businesses are taking punch after punch from the truly ignorant residents. Instead of rallying with their neighbors to fight for the overall health of the community, physical, mental and financial, some residents continue to be divisive, even hateful. Clearly showing that they do not care that their neighbors stay employed or that their neighbors are able to keep their business that they sacrificed to build for years, even decades.”

According to Herendeen, local businesses have been supportive of the community in years past, donating time, money, goods and services to local causes and organizations, and now when the businesses need their support, these very same community members who asked for donations have not only turned their backs on them, but have outright vilified them.

“How quickly they forget that they were knocking on our local business doors asking for donations, which were handed over with a smile,” Herendeen said. “And now that the businesses need help, these same people have gone to social media and blasted them. The saddest part of all this is that, if those businesses survive, the very people attacking them will once again knock on their door asking for donations, and our businesses will donate, for the good of the community.”

Editor’s note: Population data was acquired through the U.S. Census Bureau website; other data was provided by zip-codes.com. Karen Everett Watson contributed to this article.