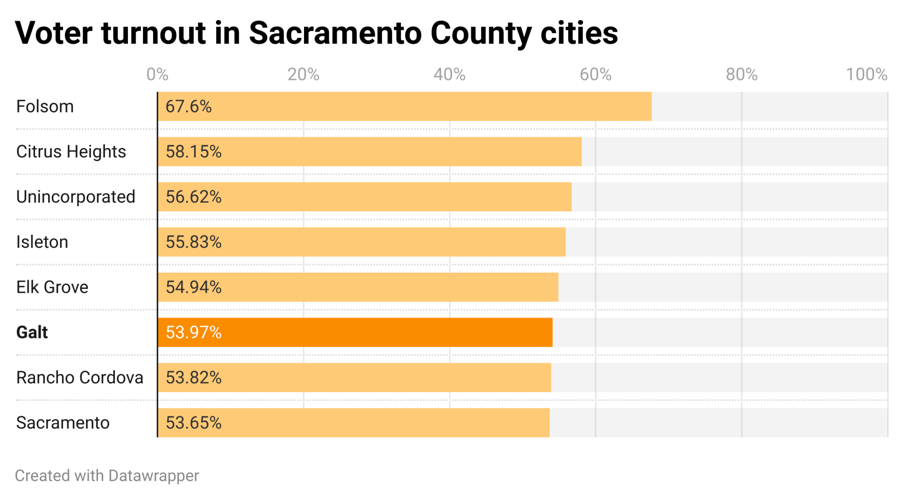 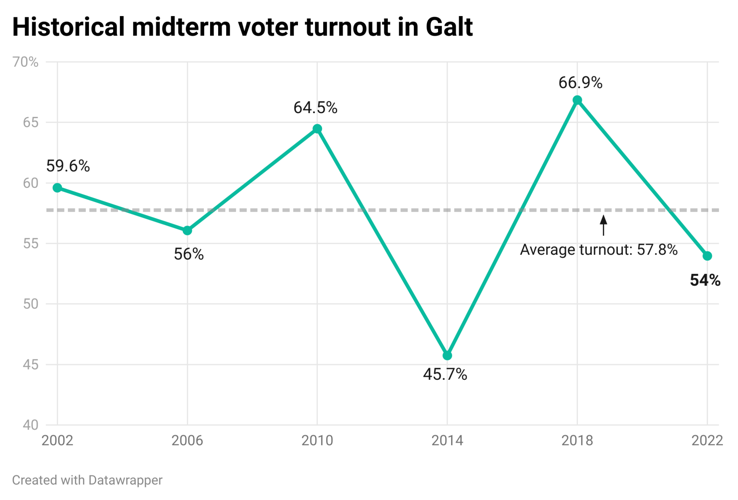 Looking at the proportion of the vote that each City Council candidate had at each vote count update, it becomes clear how small the difference between third and fourth place was. The detail on the right, of Rich Lozano’s and Tom Silva’s percentages, shows how Silva gained the lead early on, before his share of the vote declined. The two were never separated even by a percentage point.

Looking at the proportion of the vote that each City Council candidate had at each vote count update, it becomes clear how small the difference between third and fourth place was. The detail on the right, of Rich Lozano’s and Tom Silva’s percentages, shows how Silva gained the lead early on, before his share of the vote declined. The two were never separated even by a percentage point.

Somewhat more than half of Galt’s eligible voters submitted ballots in the recent general election, low to midrange among comparable past elections. When it came to picking Galt City Council members, more than one in four voters didn’t use their full voting power.

These and other insights came from a Herald analysis of Sacramento County’s data on the November general election.

The election drew out close to 54% of the city’s eligible voters. This turnout is below the city’s average of 57.8% in recent midterm elections. Galt’s highest midterm turnout in the past two decades was 66.9% in 2018, the first election in which every Sacramento County voter got a vote-by-mail ballot. The lowest proportion of voters participated in 2014, only 45.7%.

Compared to other Sacramento County cities, and unincorporated areas, Galt’s turnout was below average: the city of Sacramento saw the lowest voter participation at 53.7%, while Folsom turned out the highest proportion of voters, approaching 68%. The county as a whole reached 56% turnout.

More than a quarter of Galt residents who submitted a ballot for the Nov. 8 election didn’t cast all the City Council votes available to them, according to calculations based on county statistics.

Anywhere between roughly 28% and 85% of Galt residents who submitted ballots “undervoted” in the council election, depending on how many candidates each voter picked. Though the exact proportion is hard to know with the county’s aggregate figures, most people voted for at least two candidates.

The undervotes in the council election are significant because it was the only race in Galt that allowed multiple choices, meaning voters could participate in the election while leaving some of their allowed votes on the table.

With three open council seats, each voter had the opportunity to select up to three candidates to support. If a voter picked only two candidates, that counted as one undervote; if they picked just one candidate, that was two undervotes; if they left the section blank, that was three.

Those numbers can be converted into a range of people who undervoted. With the assumption that every person who undervoted chose zero candidates, one gets the lower end of the range, 28%. Assuming that every undervoter picked exactly two candidates gives the upper end, 85%.

Following the once-a-decade redistricting, which shuffled Galt’s representation in the state Legislature and in Congress, the city’s voting patterns appear more in sync with its new districts.

In the previous election for state Senate, state Assembly and the House of Representatives, Galt consistently favored Republican candidates who lost in the overall district to Democratic opponents.

In the 2022 general election, Galt again chose three GOP candidates, but two of them won districtwide.

In redrawn state Senate District 6, which includes communities to the north, east and south of Sacramento, Republican former Assemblymember Roger Niello won Galt with 61% of the city’s vote; he got a smaller majority in the overall district but still took the open seat with nearly 56% of the vote.

Seeking to represent the new Assembly District 9, Assemblymember Heath Flora, R-Ripon, received 65% of the Galt vote. He won by a larger margin, 69%, in the wider district, which includes Lodi and Manteca, and reaches south into Stanislaus County. This result stands in contrast to the 2020 Assembly election, in which a Republican candidate won a slight majority in the city, but lost the overall election with only half as many votes as then-Assemblymember Jim Cooper.

Local sentiment still differed from the overall district in the election for redrawn Congressional District 7, which involved Rep. Doris Matsui, D-Sacramento, running against Republican Max Semenenko. Close to 59% of Galt voters preferred Semenenko, but the district went with Matsui, who won with 68% of the total vote.