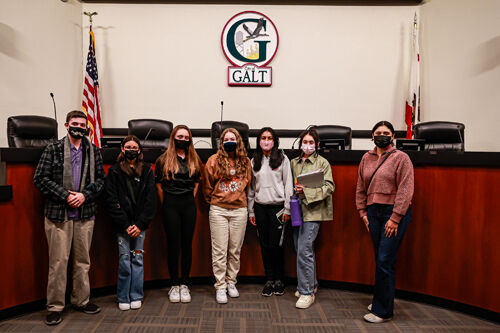 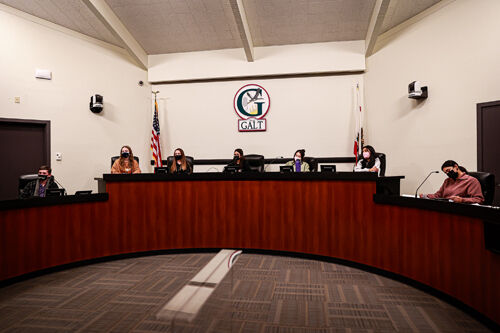 Youth commissioners sit at the Council dais during their first in-person meeting since 2020.

Youth commissioners sit at the Council dais during their first in-person meeting since 2020.

The Galt Youth Commission met in the City Council Chambers on Jan. 3 to hold its first in-person regular meeting after more than 1½ years of meeting online.

For many of the commissioners, it was their first opportunity ever to sit at the Council dais because they had been appointed after the COVID-19 pandemic forced the body to switch to Zoom.

“I’m feeling very excited,” Chair Alexa Murillo Cuevas told the Herald. “I’m glad that we’re finally getting to get in person because I feel like it’ll help with productivity and having everyone’s spirits more motivated to do what we do.”

Commissioner Josh Cullers said the experience was unique for him.

“This being my first meeting, I was very impressed … this is the most official-looking and most official thing I’ve ever done probably in my life,” Cullers said.

At the meeting, commissioners heard from the city manager about changes to the process of posting commission news posted on social media and decided how to continue its drive for smoke-free multifamily housing in Galt.

Discussing city social media policy, City Manager Lorenzo Hines asked the commission to assign one of its members as its main point of contact for social media.

That person would develop social media posts for city Economic Development Director Amie Mendes, who would then publish them on the city’s social media platforms, such as Facebook and Instagram. The chosen member would also present a general plan for the month’s posts at each meeting for approval.

Commissioner Damaris Ramirez, the group’s publicity officer, quickly received the assignment. Ramirez called the setup “a great idea” and said she would meet with Mendes and report back to the commission in February.

The commission also decided to gather more information before proceeding further with its advocacy for a smoke-free housing ordinance in Galt.

The proposed ordinance would ban smoking inside multifamily units while providing for dedicated smoking areas. In putting together the campaign, the commission has received support from antismoking group Breathe California.

Adult Mentor Leesa Klotz suggested that the commission survey Galt youth to learn their opinion on the proposal and seek input from landlords and City Council members.

The commissioners were favorable to this idea and formed a subcommittee to organize these actions.

The commission also authorized funds for three $250 scholarships, to be awarded to one senior from each of Galt’s high schools. The deadline for applications is set for April 14.