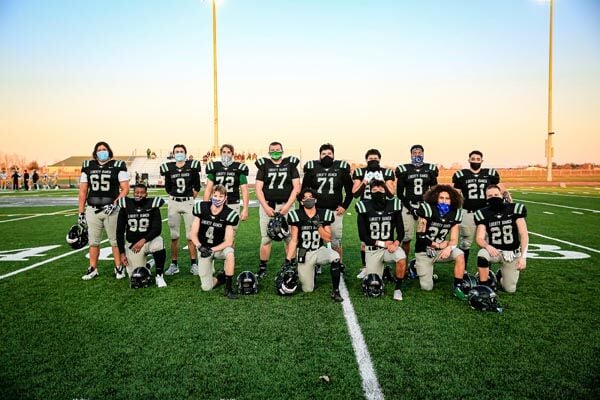 The season opener was also senior night, with the Hawks honoring their seniors in a pregame ceremony. 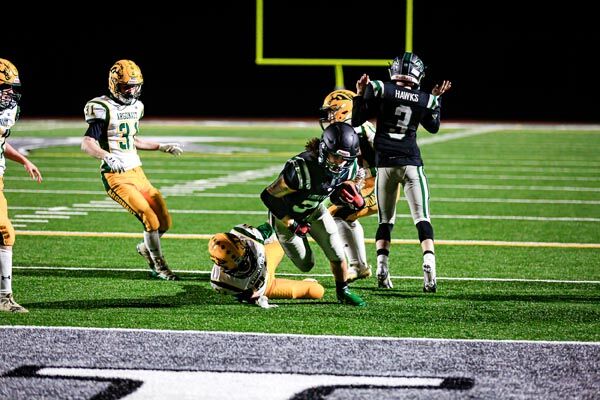 Jordan Besabe of the Hawks scores in the fourth quarter.

The season opener was also senior night, with the Hawks honoring their seniors in a pregame ceremony.

Jordan Besabe of the Hawks scores in the fourth quarter.

Being able to walk out onto the field at Liberty Ranch High School and play meant everything to the players and coaches on both sides on March 12.

Liberty Ranch hosted Argonaut in the football season opener, the first of four games the Hawks will play in a shortened season after COVID-19 delayed the start of the 2020-21 school sports season.

As for the game itself, most of it was something the Hawks probably wish they could forget.

Argonaut scored seven consecutive touchdowns before the Hawks got on the scoreboard in a 43-7 loss.

“Obviously the score was not what we wanted, it was what it was but it was one of those situations where you have to be thankful for those opportunities,” Hawk head coach Anthony Linebaugh said afterward about having the chance to play eight months after football normally starts in Galt.

The Mustangs had little trouble finding the Hawks’ end zone in the first half, scoring four times in the first half, with the last touchdown coming on a pass to Garrett Elmore for a 29-0 Mustang lead with 54 seconds left in the half.

Mateo Flores added to the Mustangs’ lead in the third quarter for a 36-0 lead before senior fullback Zachary Hernandez scored on a five-yard run for the 43-0 lead after Andre Kings’ PAT kick with 4:45 remaining.

“We started off pretty well, obviously not defensively. One of the issues was in the second series, they scored, then on the ensuing series we lost yardage and we had to punt out of our endzone,” Linebaugh said.

With the Mustangs being able to find their way into the Hawks’ end zone both in the air and on the ground, the Hawks delayed their own chances at scoring by allowing two interceptions in the second half, including one in the third and one in the fourth quarter.

They put themselves on the board finally with 1:31 left in the game when Jordan Besabe scored and the Hawks kicked the PAT afterward to come within 43-7.

In their postgame talk, the Hawks tried to regroup and look forward to fixing mistakes for this week’s game against Union Mine.

“We’re looking forward to (this) week and building off of this loss and looking at what we did wrong,” Tony Rangel said afterward.

The road to having the chance to play had been a winding, seemingly never ending one for football and other high school sports.

With outdoor sports being allowed to play recently by the state, having immediate family members in the stands and being able to return to competition set the stage for a milestone night.

“It felt great. We fought through a lot of adversity. We didn’t even know if we were going to play so just to be out here was a blessing to play one more time,” Rangel, a senior, said.

“It was a lot,” Linebaugh said of the experiences teams faced over the past year. “Testing, health screens, that was a victory, just getting here.”

With the Hawks unsure of when or if they’d be able to play this season, they worked out on their own and trained in pods with coaches until they finally learned they’d play.

“Everyone was excited. We started going harder in practice, firing each other up, hitting more. It really didn’t show on the field today but we’re definitely going to pick it up,” Rangel said.