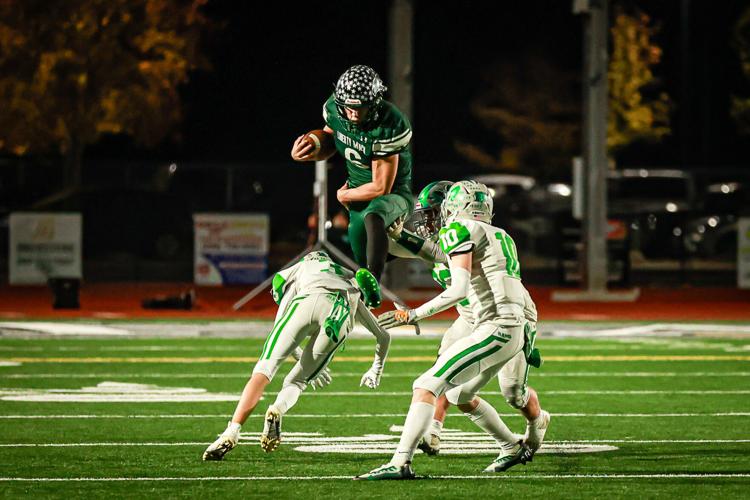 Arthur Drager hurdles to avoid Dixon defense and runs it all the way to the end zone. The TD was called back due to the hurdle. 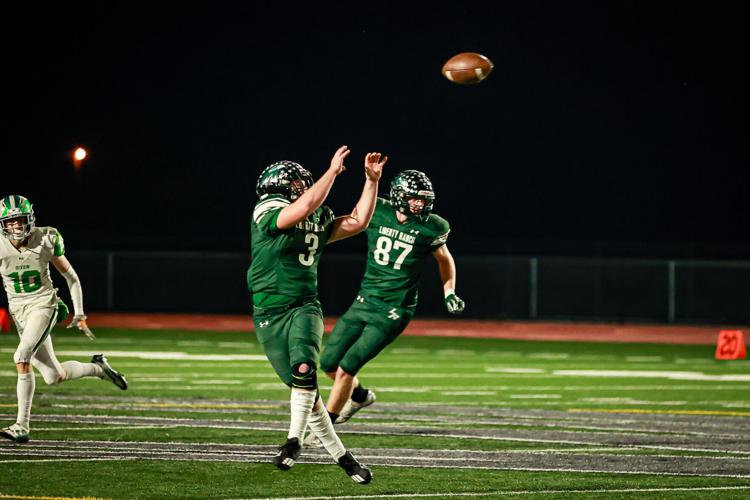 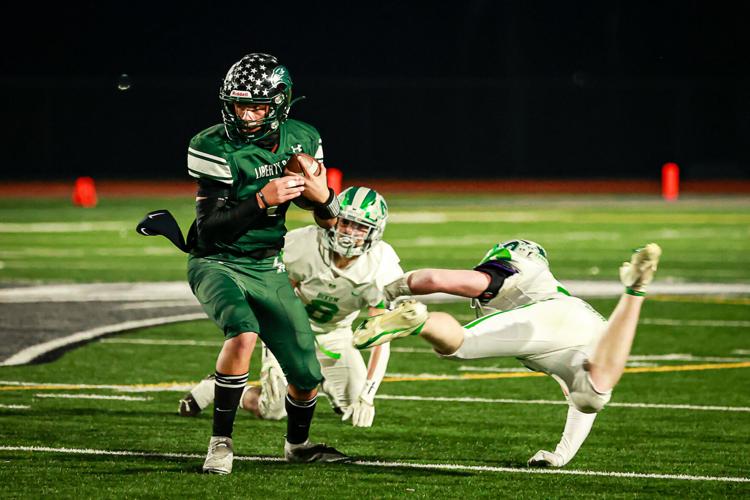 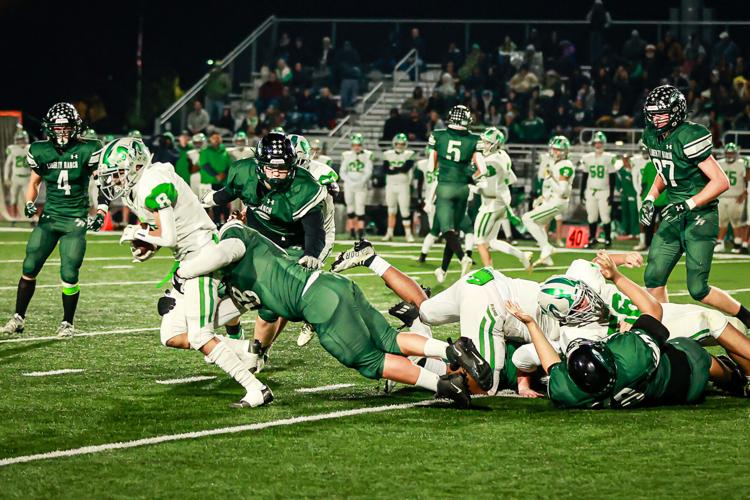 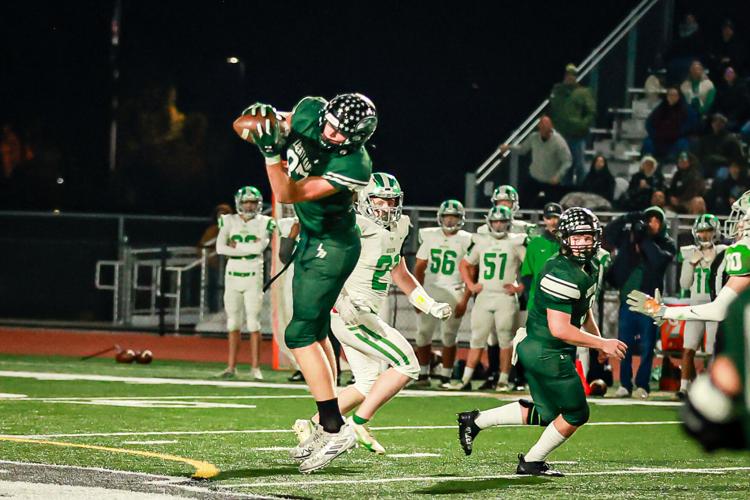 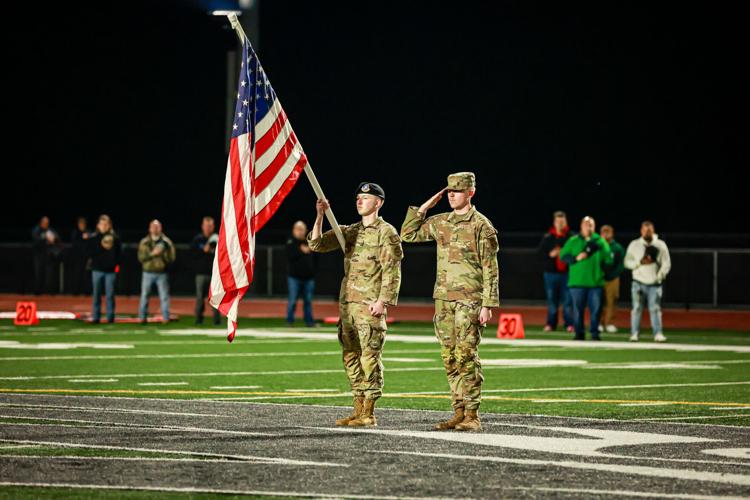 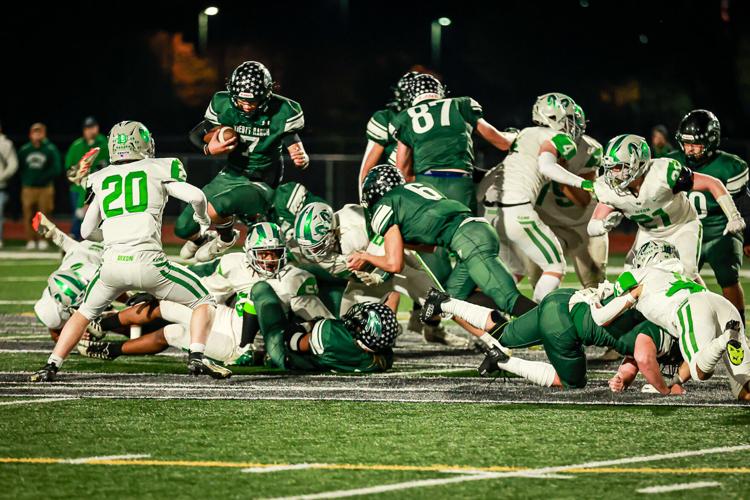 Kymani Fenika hurdles over a pile of players to gain some yards. 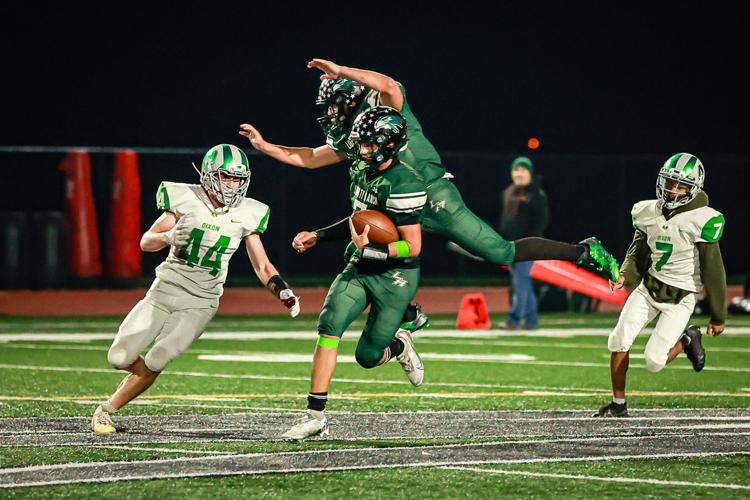 Arthur Draeger dives for a block while Kymani Fenika rushes on. 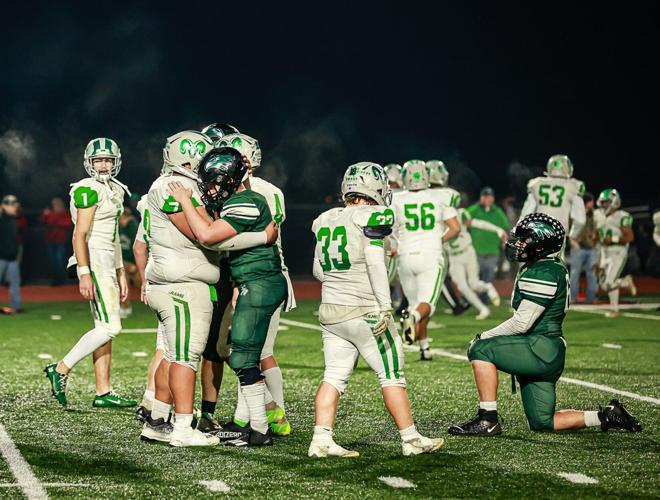 After the well-fought game, opposing players console and congratulate each other.

Arthur Drager hurdles to avoid Dixon defense and runs it all the way to the end zone. The TD was called back due to the hurdle.

Kymani Fenika hurdles over a pile of players to gain some yards.

Arthur Draeger dives for a block while Kymani Fenika rushes on.

After the well-fought game, opposing players console and congratulate each other.

The playoff game between Liberty Ranch and the Dixon Rams started off strong for the Hawks when Arthur Draeger scored on the second play with 11:15 left in the first quarter.

Dixon was unsuccessful moving the ball and was forced to punt. Liberty Ranch, likewise, punted back and the first quarter ended with the score 7-0.

Hawk Defense held strong and the ball was turned over on downs. Liberty Ranch was forced to punt once again, but Kymani Fenika snagged an interception on the 40-yard line with 11:18 left in the half.

Liberty is unable to make it happen and punts with 8:23 left in the half.

Liberty gets the ball back and, on a carry from the Hawk’s 30-yard line, Arthur Draeger hurdles and dodges players left and right, making it all the way into the end zone, but there is a flag. The touchdown is called back due to Draeger’s hurdle, which isn’t allowed in high school. Some thought to the rule is that it is for safety issues, but another thought is avoiding a helmet to the knee makes a hurdle necessary.

Liberty is forced to punt again 3:55 left in half.

Dixon still can’t get it together and turns the ball over with 3:33 left in the half.

Cody Smith then catches a pass for a first down with 2:48 left in the half. After a few runs, Gavin O’Brien was able to squeeze in and scored by a nose.

Liberty kicks off and the Rams run it down to the Hawk’s 7-yard line with 27 seconds left in the first half. A quarterback keeper around a soft edge allowed the Rams to score for the first time, and the half ends with Liberty ahead 14-7.

The ball was turned over a few times in the third quarter and, when Dixon was way back in their territory, Gavin O’Brien intercepts a crucial pass to give the ball back to the Hawks. Kymani Fenika kept the ball and scored, making it 21-7 with 3:34 left in the third quarter.

At this point, Dixon brought out their throwing game and started completing passes, making their way down the field. Dixon scored with 2:38 left in the third quarter.

Liberty gets close again and tries for a field goal on last down, and it is blocked and picked up by Dixon who ran it all the way for a score. Liberty blocked the point after.

The battle continued, each team playing well, and Dixon was able to score once again with 5:58 left in the game, making the score 21-20 with Liberty still ahead.

Fenika breaks free and has an incredible run, making it to the 20-yard line. Fenika then throws, looking for Cody Smith, and the ball is intercepted right in front of Smith Dixon takes over with 5:06 left in the game.

Dixon throws another long pass and the receiver scores, making it 26 to 21 Dixon.

The two-point conversion was no good, but the yellow was thrown for pass interference, and Dixon was successful on the second try.

Liberty continued to fight with everything they had, and they made it down to the 15-yard line. Worst-case scenario: the ball is fumbled, and the Rams recovered it and took over with 1:38 left in the game.  Dixon then took knees and ran the clock down to end the game for a final score Dixon 28, Liberty Ranch 21.

The teams then hugged and some tears were shed, as the perfect Liberty Ranch season came to an end.

Senior Gavin O’Brien will cherish these life lessons forever. “Football taught me hard work, perseverance and dedication,” said O’Brien. “Fighting through pain, and trusting your brothers and working as a team. I am just thankful to be out here and be able to play with such an amazing group of young men.”

Top rusher Arthur Draeger has no regrets. “I would have liked to have gone farther in the playoffs,” said Draeger. “I feel fine and I left the field with no regrets.  I love them boys, not just the starters, but everyone who put in the practice.”

Junior quarterback Kymani Fenika appreciated the coaching staff. “I attribute our success to all the coaches and putting in the hard work,” said Fenika. “It shouldn’t have ended like this, but it did, and we are going to hold our heads up.”

Head Coach Warren Schroeder, who had an amazing perfect season his first year as head coach, encouraged the team to learn life lessons during his after game talk with the boys.

“It’s frustrating because they didn’t beat us but, in life, things don’t always go your way,” said Schroeder. “Wins, losses, it’s more important that you learn life’s lessons and grow up to be responsible.  When life gives you a gut punch, don’t give up or hang your head, wise up and be strong. Find strength in your family and in your friends. I couldn’t have asked for a greater group of guys; and remember, you are still in this football program till you walk across that stage on graduation night.