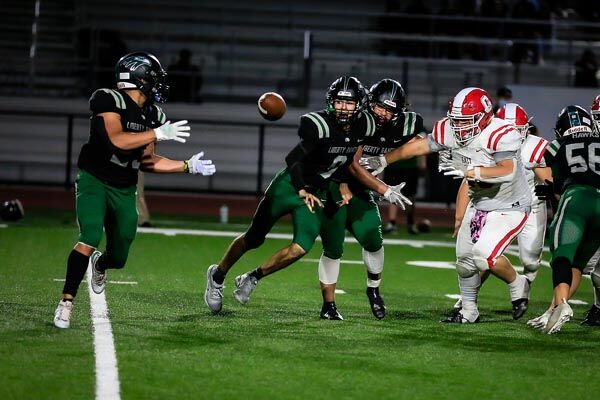 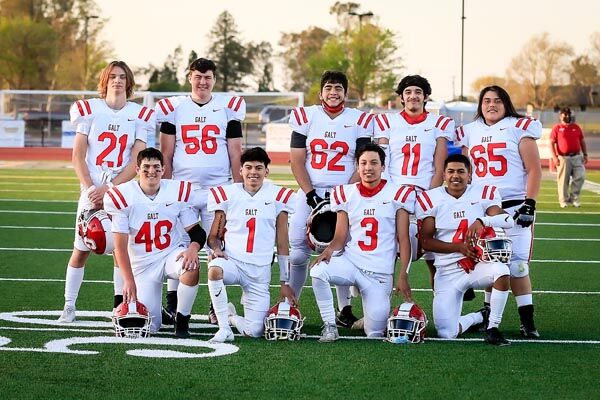 The Galt Warriors celebrated their senior night before the game. 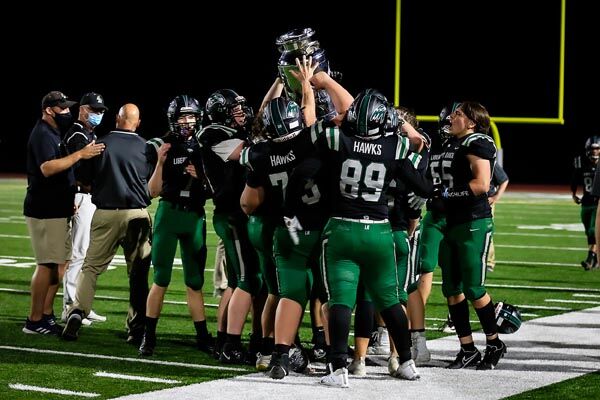 The Hawks celebrate their win with the Dairy Bowl trophy.

The Galt Warriors celebrated their senior night before the game.

The Hawks celebrate their win with the Dairy Bowl trophy.

In a whirlwind season that lasted less than half the length of a typical season, the Liberty Ranch Hawks gained steam in the fourth quarter of the Dairy Bowl against their crosstown rivals to bring home a 30-16 victory and retain the coveted milk can trophy.

Neither team had scored by the time the second quarter started and for the middle part of the game, it was a tossup as Liberty Ranch held a modest lead that shrank when Galt scored with 6:24 remaining in the third quarter.

With both teams entering the game without a win this season, the matchup was one that some were predicting would be one of the closest match ups in recent Dairy Bowl history.

With the Hawks leading 22-16, the Warriors had a chance to close in on the score when they took possession when the ball became loose during the Hawks’ possession at the start of the fourth quarter. The Hawks recovered the ball on the very next play, however, and would later create a buffer as Tony Rangel scored with 8:50 remaining and the Hawks completed a two-point conversion to create a two-score lead over the Warriors.

The Warriors would complete several passes on the ensuing possession before coming up empty to put the ball back in Liberty Ranch’s hands toward the end of the game.

Although the Hawks moved the ball to the Warriors’ two-yard line with about 40 seconds left, the Hawks ran the clock out to end the game with the 30-16 win.

“We had a good week. Obviously, the season’s short and things didn’t go quite like we wanted them to go the last couple weeks so we were really looking forward to this. This was truly a program victory. Our junior varsity, varsity programs, it was just a great night,” Hawk head coach Anthony Linebaugh said afterward.

Both teams’ defenses prevented a change in the 0-0 score in the first quarter but several carries by Tony Rangel helped put the Hawks on the Warriors’ six yard line in the second quarter. Gabriel Simoes then scored on a six-yard touchdown reception on a pass by Max Oliver for a 6-0 Hawk lead.

Simoes scored his second touchdown on a one-yard play with 27.6 seconds left in the half before Rangel scored on a two-point conversion to take a 14-0 lead.

Levi Humphrys put the Warriors on the board before the half when he scored on a reception on a throw by Vicktor Garcia with 1.6 seconds left. The Warriors completed a two-point conversion of their own to pull within 14-8 of the Hawks.

Unfortunately, the Warriors missed out on several opportunities in the second half. They fumbled the ball at the start of the third quarter, leading to a Hawk recovery. Simoes would later score on a one-yard play with 10:13 left and Oliver would throw a two-point conversion pass to Tyler Johnson to take a 22-8 lead.

The Hawks kept the ball out of the Warriors’ hands once again when they intercepted a Warrior pass with 9:57 left.

However, the Warriors put themselves back on track if not temporarily with a scoring drive that resulted in Joseph Ortiz scoring with 6:24 left and Kenny Tran scoring the two-point conversion to find themselves within six points of the Hawks.

Tyler Johnson, who is headed to the Air Force after graduation, talked about team’s focus during halftime.

The Hawks let the Warriors to celebrate their senior night before the game, and senior wide receiver and offensive linebacker Pharoh Tapia, who transferred to Galt from Bear Creek in Stockton after his sophomore year, noted the significance of the last game.

“I knew just going into the game I was going to have fun and I did, it’s the last game with my teammates. I don’t know many of the Liberty guys, but still playing against these guys was fun,” Tapia said.

“A few silly mistakes, a lack of focus here and there but the heart and the effort were 100 percent. The kids gave it everything they had,” Galt coach Tim Cobleigh said afterward.

The Hawks finished with a 1-3 record while the Warriors finished the year 0-3 after seeing their would-be first game against El Dorado cancelled.