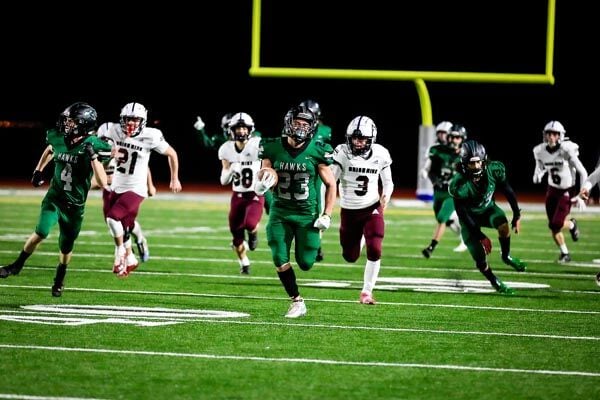 The Hawks’ Tony Rangel runs for one of his three touchdowns on March 19 against Union Mine. 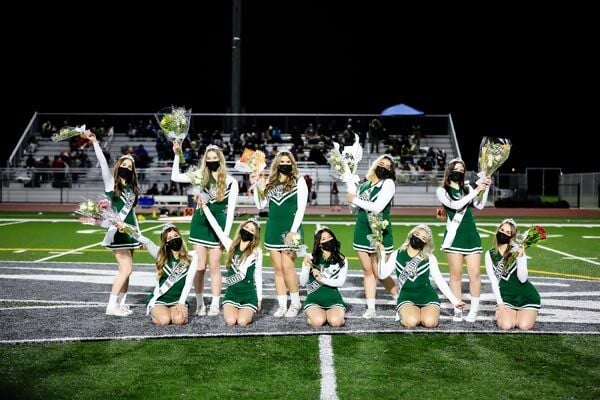 The Hawk senior cheerleaders are honored on senior night prior to the Liberty Ranch-Union Mine game.

The Hawks’ Tony Rangel runs for one of his three touchdowns on March 19 against Union Mine.

The Hawk senior cheerleaders are honored on senior night prior to the Liberty Ranch-Union Mine game.

The previous week, they had hosted a 43-7 loss to Argonaut. The fourth quarter of the March 19 home game against the Diamondbacks saw the Hawks in the driver’s seat this time; however, Union Mine’s Evan Beck scored on a short run to give the Diamondbacks what would be the eventual win, 22-21.

The Hawks attempted a Hail Mary near midfield with just over a second left but the Diamondbacks were prepared with a handful of players positioned to defend the ball and knocked away the pass to hang on for the win.

Despite back-to-back losses, head coach Anthony Linebaugh commended his team for the difference in execution compared to week one.

“There was so much improvement compared to last week that was just huge, and that was something that we as a team had to show to prove that we got better,” Linebaugh said.

When asked if he had considered a field goal attempt on the final play of the game, Linebaugh said that he considered it briefly but that they wanted to be 10-15 yards closer before attempting a field goal given the distance.

The game was close the entire four quarters, with the Diamondbacks scoring first after a botched field goal attempt.

Union Mine’s Joe Repass had missed a second attempt at a field goal with 3:57 left in the first quarter after a penalty pushed the Diamondbacks back on Repass’ first attempt, which had gone through.

Repass was successful on another attempt with 1:32 remaining, however, for a 3-0 lead.

The Hawks responded quickly, however, and Rangel scored on a long run with 1:12 remaining for a 7-3 lead.

The Hawks also attempted a field goal of their own in the second quarter, missing a 47-yard attempt with 6:17 remaining. Union Mine would later make the Hawks pay for throwing an interception with 1:16 left after Mason Matlack scored on a reception. The Diamondbacks’ two-point conversion throw was incomplete, however, for a 9-7 Diamondback lead with 59.7 seconds left.

Once again, the Hawks would not let the Diamondbacks have the final word in the quarter.

Rangel scored his second touchdown with 47.6 seconds left in the half for a 14-9 halftime lead after the PAT kick.

A Union Mine missed field goal attempt in the third quarter with 6:17 left led to a Hawks possession that would carry on to the fourth quarter and result in Rangel’s third touchdown as he scored on a two-yard run with 11:29 left.

This time, it was Union Mine who reacted quickly after an opponent’s touchdown. The Diamondbacks scored with 11:04 remaining to come within 21-16 of the Hawks.

“It was maybe not the cleanest game, but I think the fans that were able to come got their money’s worth,” Linebaugh said.

The Hawks will work to build on the one-point difference from last week during a rare Thursday matchup this week on the road against El Dorado.