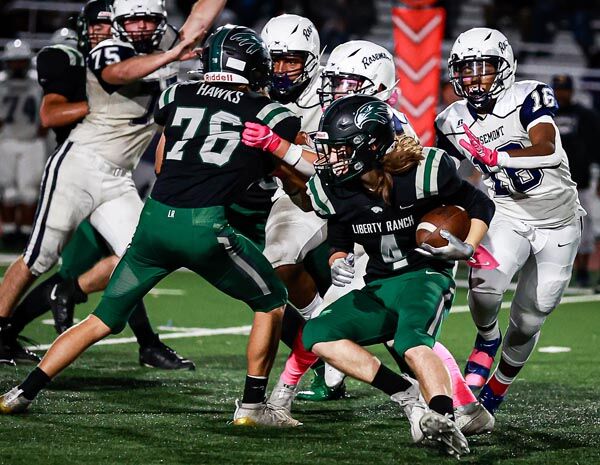 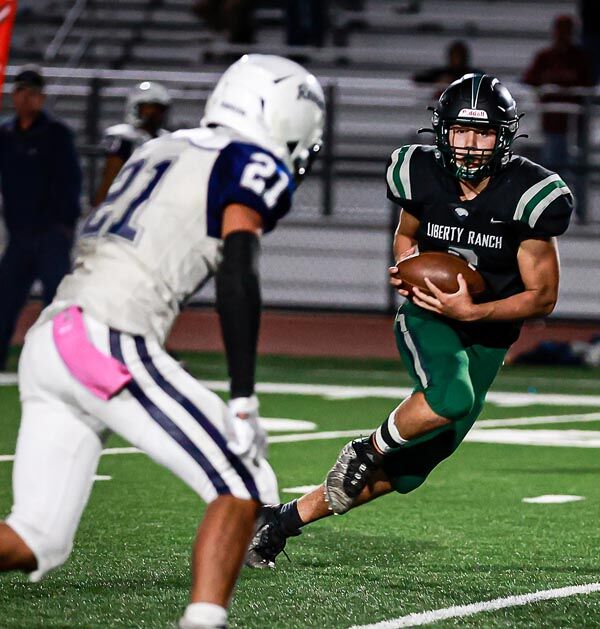 Arthur Draeger is the Hawks leading rusher. Here he is gaining some more yards against Rosemont. 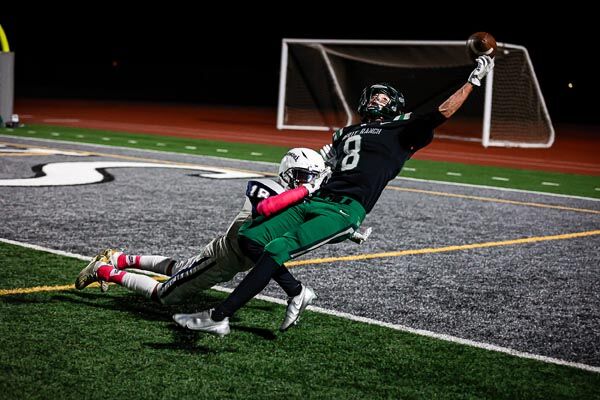 Arthur Draeger is the Hawks leading rusher. Here he is gaining some more yards against Rosemont.

Head Coach Anthony Linebaugh was hoping for a different outcome.

“This was a tough league game against a good opponent, the first SVC league game for many members of our team,” Linebaugh said.

The game began with a kickoff into the end zone, where it was then placed at the 20-yard line. The very next play, Rosemont was able to run it into the end zone for an 80-yard score, but their two-point conversion was no good.

The Hawks worked the ball all the way down to the five-yard line on a series of drives, but the Wolverines held strong and denied the Hawks to get to the goal.

After the Hawk defense held their ground, Rosemont couldn’t move the ball and punted. Liberty Ranch was then able to drive down near the goal.

After numerous tries, Arthur Draeger finally made it across the goal line. Quarterback Logan McCreery kicked the extra point and hit the scoreboard with the ball. The score was 7 to 6 with five minutes left in the half.

The Hawks began to drive toward the goal again after recovering a fumble.

Slowly but surely, drive after drive, inch by inch, the Hawks battled for each down. At fourth and seven with 1:17 left in the half, Liberty Ranch scored on a 32-yard field goal.

Unfortunately, that field goal was answered during the few seconds left in the first half.

When the Hawks kicked off, Rosemont ran the kick back into the end zone. Luckily, due to clipping in the backfield, the score was taken away.

Rosemont wasn’t to be denied, however, and started passing the ball and was able to get it to the 5-yard line.

With 13 seconds left on the clock, Rosemont scored with a pass caught in the end zone and, adding salt to the wound, the extra point was good.

The half ended with a score of Liberty 10, Rosemont 13.

Liberty Ranch received the ball after the half and both teams had trouble moving the ball. Just as the Hawks were getting close, a turnover allowed Rosemont to score again.

With 10 minutes remaining in the game, the score was now Hawks 10, Wolverines 19.

Liberty Ranch started throwing the ball, and Draeger ran for a touchdown from a 45-yard reception from Logan McCreery.

The Hawks were closing in at 17-19 but Rosemont was relentless after the kick return. Rosemont scored again on a fluke when a Wolverine player tipped the ball, and another player recovered the ball in the end zone before it hit the ground for another touchdown.

Rosemont’s two-point conversion was good this time, and the score was 17-27 with 7:51 remaining in the game.

Liberty Ranch started passing the ball, and it was intercepted and run back to the 10-yard line where Rosemont soon scored again. The score now was 17-33 with 5:57 remaining in the game.

Liberty Ranch neared the end zone again when a quarterback sack stopped their progress, and the game ended with the score Liberty 17, Wolverines 33.

Linebaugh is looking ahead to the next game.

“Small mistakes made the difference as we did not capitalize on some opportunities and gave up some big plays defensively,” Linebaugh said.

“We have a resilient team, and all of us are looking forward to this week’s contest versus Bradshaw.”