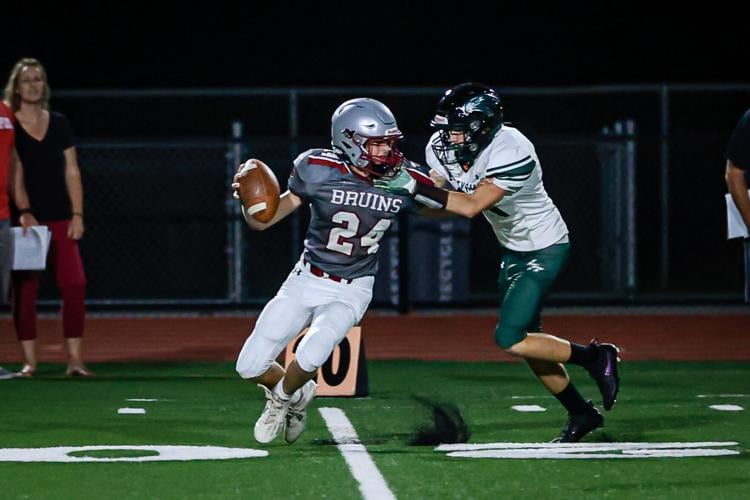 Christian Wallace puts the pressure on the Bruins quarterback. 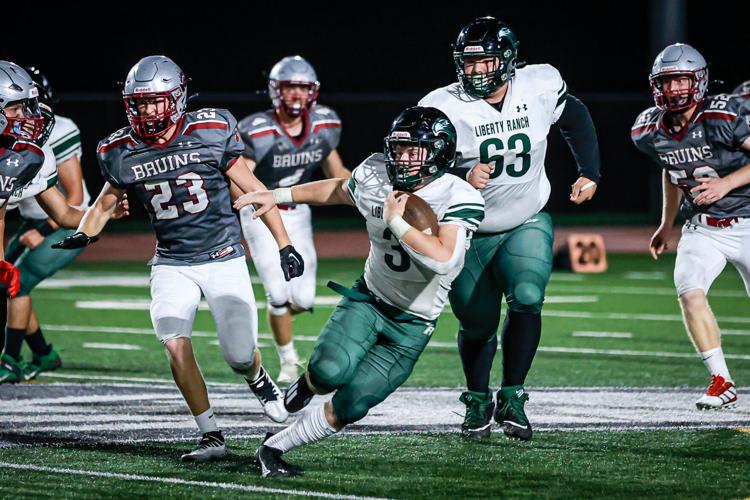 Gavin O’Brien rushes for some of his 81 yards. 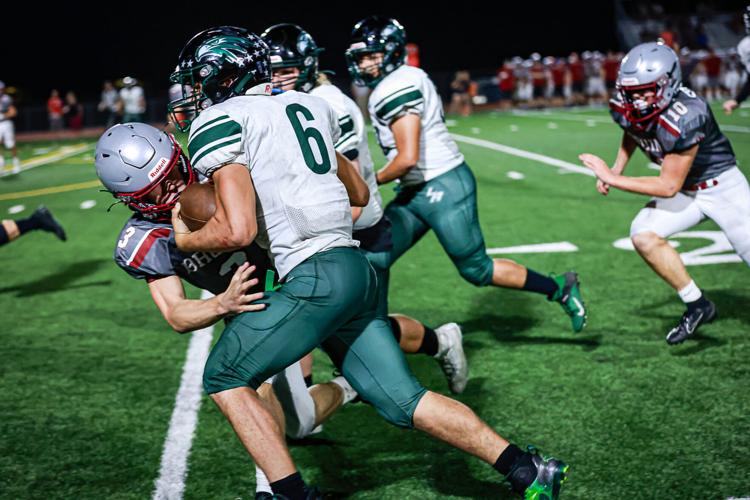 Arthur Draeger is unstoppable as he plows through a tackle attempt. 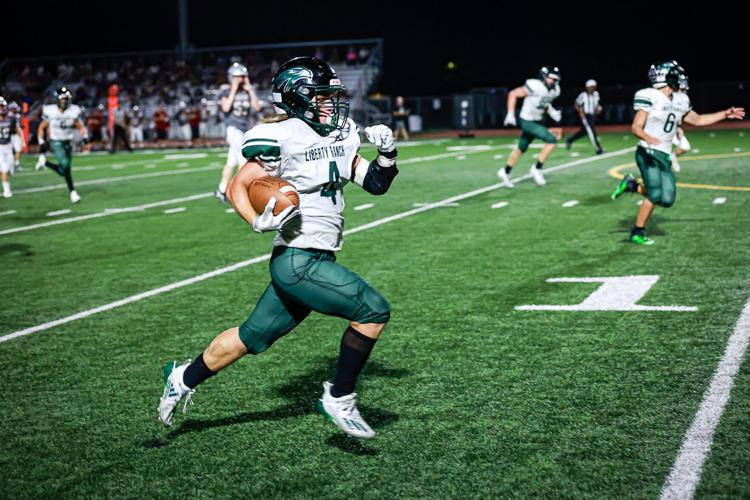 Shaye Setter runs his Pick-six 52 yards to the goal. 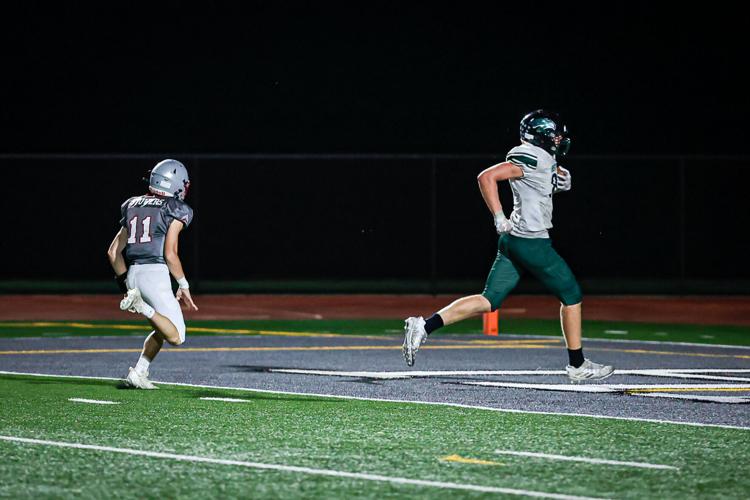 The Bruins quarterback has no chance of catching Cody Smith after his Pick-six. 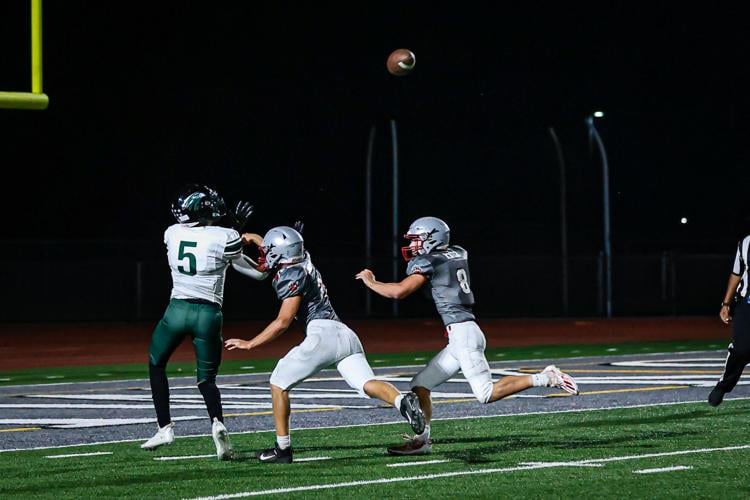 Armando Tapia catches one in the zone.

Christian Wallace puts the pressure on the Bruins quarterback.

Gavin O’Brien rushes for some of his 81 yards.

Arthur Draeger is unstoppable as he plows through a tackle attempt.

Shaye Setter runs his Pick-six 52 yards to the goal.

The Bruins quarterback has no chance of catching Cody Smith after his Pick-six.

Armando Tapia catches one in the zone.

The game started later at 8 p.m., due to the extreme heat of the week, and the lights timed off before the game was over. They came back on quickly, and the game finished up.

The Bear River Bruins, playing as the home team but sitting on the visiting side after the nonleague game was moved to Galt because of smoke from the Mosquito and other fires in the Placer County area, fell to Liberty Ranch 57-7 as an orange moon rose.

Head Coach Warren Schroeder prepared his team as best he could when practices were moved before school or indoors due to the heat wave that resulted in a record 116 degrees on Tuesday.

“We worked on stopping the run and forcing them to go to the air, which we were successful at doing,” said Schroeder. “We also wanted to work on more of our spread game this week and get some experience. We are looking forward to a challenging game against a higher division opponent in Tokay next. It will give us some valuable experience going into league.”

The Hawks outgained the Bruins 416-118. Liberty Ranch rushed for 256 yards in 39 carries, and QB Kymani Fenika completed seven of 11 passes for 160 yards.

The Hawks (4-0) were noticeably bigger across the offensive and defensive lines than Bear River (1-2) and blew open the game with four touchdowns – two 1-yard runs and two 50-yard pick sixes – during a 6½-minute blitz in the third quarter.

Junior Shaye Setter had the first interception return for a touchdown. Senior Cody Smith then stretched his 6-foot-7 frame to block a Bear River punt, setting up Arthur Draeger’s second touchdown, a 1-yard dive. Smith, who attended several camps and visited college campuses this summer, immediately jumped in front of a Stowers pass at midfield and sprinted to the end zone to make it 48-7. The Bruins also allowed a safety when a high snap on a punt rolled out of the end zone.

Senior Cody Smith brought the swat team, using his long arms to block a punt, then intercept and run it in.

“We were working all week with coach Garcia,” said Smith. “Garcia said to watch the screen all the time and if the linemen let you go, sit back and wait for the quarterback to throw it. I read it correctly, sat right there and he threw it right into my hands and I got a pick-six. It was amazing. Shaye Setter got a pick-six as well and I am very happy that we both did. It really kept up the momentum.

Jacob Rose was where he needed to be and was the top tackler with five and two assists. Erik Salas and Arthur Draeger each grabbed four tackles.

Adding to the fun a Friday night out at the local high school football game can bring, the lights went out with 4:57 remaining in the game, drawing oohs and aahs from the crowd and prompting many fans to light up their phones. There were cheers when the lights came on about 30 seconds later.

Liberty Ranch will face Tokay in Lodi this Friday.