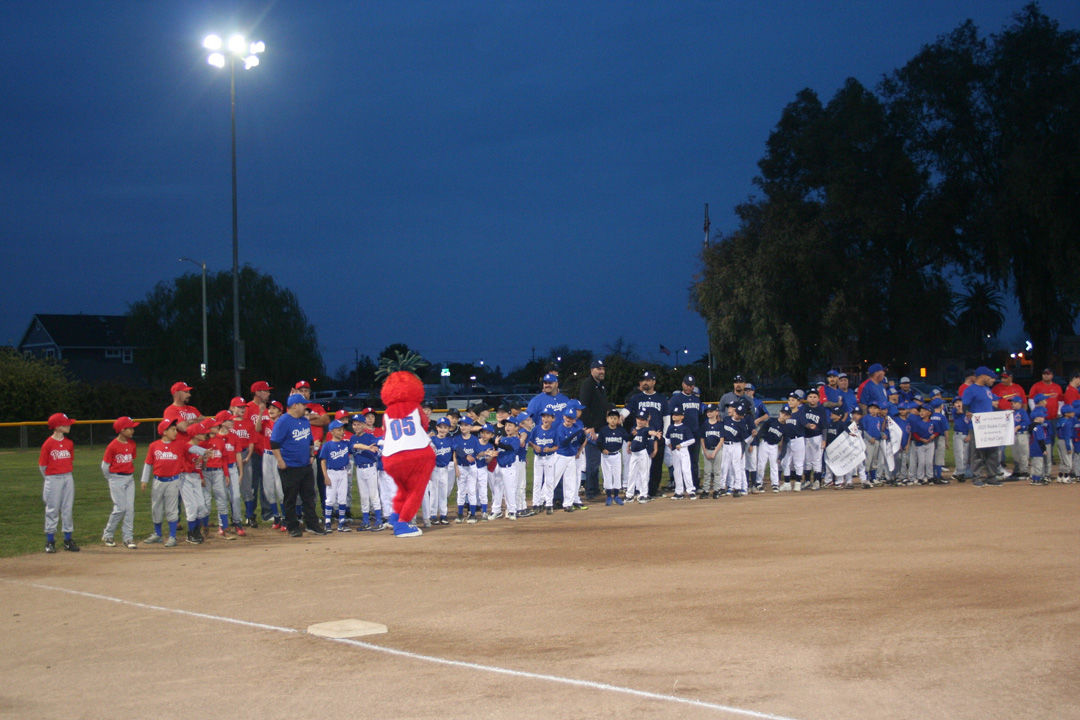 Isaac Vilchis of the Rookies Cubs throws out the first pitch as former MLB pitcher Ryan Mattheus and several other Galt Youth Baseball players look on during the March 6 opening ceremony. Above right:

Isaac Vilchis of the Rookies Cubs throws out the first pitch as former MLB pitcher Ryan Mattheus and several other Galt Youth Baseball players look on during the March 6 opening ceremony. Above right:

Not only will Galt Youth Baseball be stealing bases on a new infield this season, their season started off in true VIP fashion March 6 at Harvey Park.

Besides being introduced team by team and lining up in front of their fans on the infield at Harvey Park, GYB players were able to hobnob with Galt native and former MLB player Ryan Mattheus, the Stockton Ports’ mascot and their own mascot before launching into skills competitions and enjoying bounce houses on Opening Night.

Mattheus, a former relief pitcher, threw out the first pitch as well, and Splash showed his form on the mound with his first pitch.

Mattheus, who played for the Washington Nationals, Los Angeles Angels and Cincinnati Reds, has continued his baseball pedigree and now owns Optimum Athletes, a business that helps up-and-coming players develop their game.

The Galt High School alum was invited by several people to take part in Opening Day, he said.

“I wanted to stay in the game, I wanted to give back to the game that gave me so much. I think I have a lot to offer to young players just being so recently removed from my own playing career,” Mattheus said. “I just think this game and the continued participation of our youth can just help mold them so much and all sports for that matter. I just want to help young kids continue to play.”

Teams split into skills competitions, where winners in the throwing, base running and hitting earned prizes. Families also enjoyed food trucks and the snack bar while they supported their favorite home run hitter or pitcher.

“This year I believe we have 25 teams, we have the Galt division as well as the River Delta that joins us as well,” GYB spokesperson Tanni Watts-Russell said.

The teams will play on updated fields on three of GYB’s fields, Watts-Russell added.

“We put in a new turn infield for Harvey and also for Meadowview we re-did our infield for the north and south field. We’re also adding in Greer this year so we did cutouts for the bases over at Greer. We’re trying to get the fields looking really good this season and the guys have done a really good job with it.”