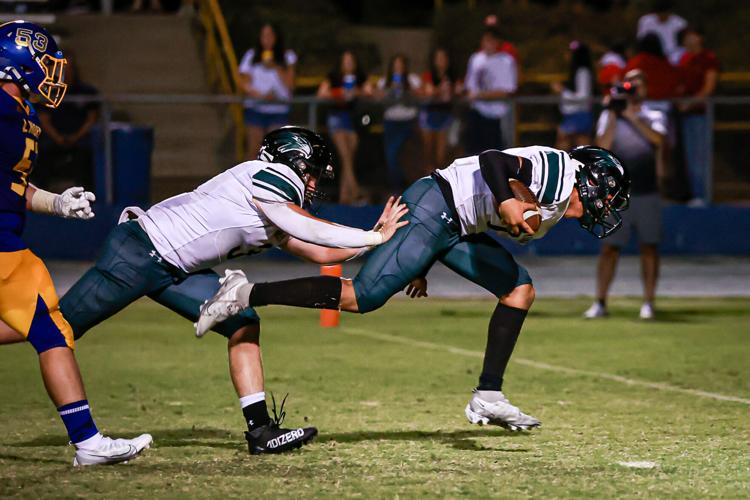 Gavin O’brien pushes Kymani Fenika into the end zone for a Hawk score. 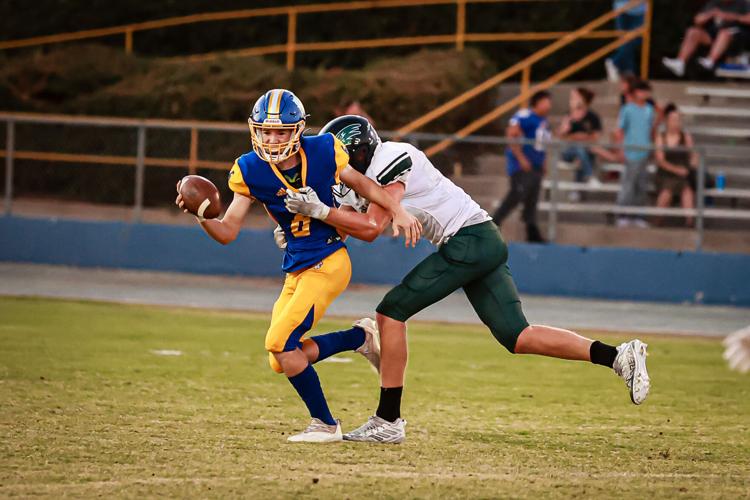 Cody Smith puts the sack on the Linden quarterback. 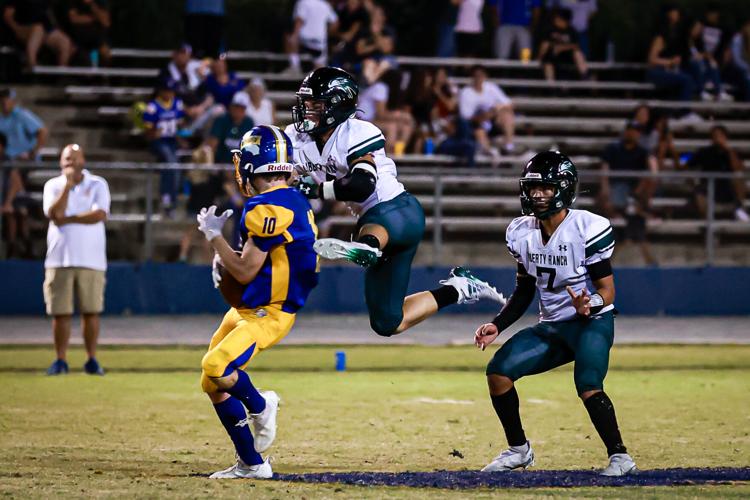 Shaye Setter leaps to shut down a Linden run. 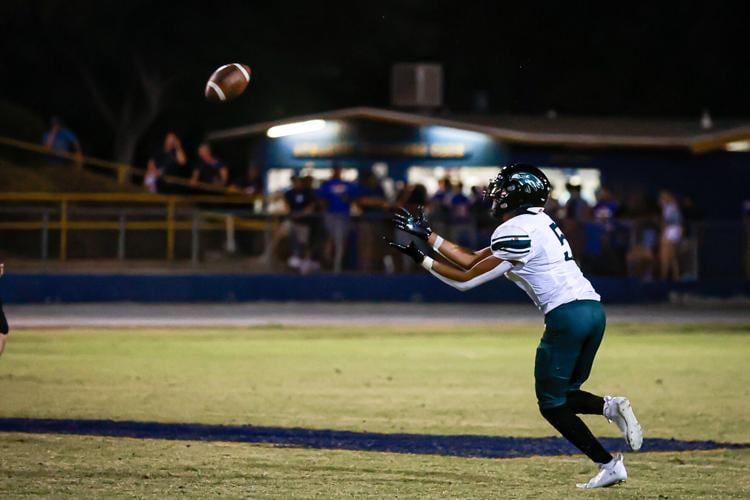 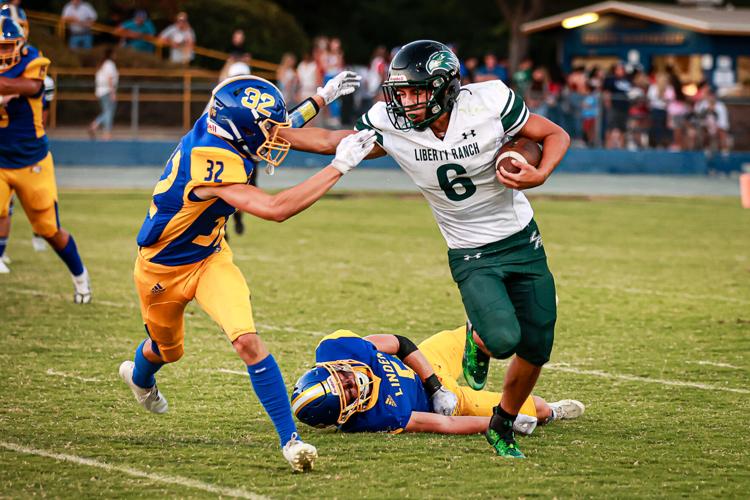 Arthur Draeger breaks a tackle on his 82-yard run.

Gavin O’brien pushes Kymani Fenika into the end zone for a Hawk score.

Cody Smith puts the sack on the Linden quarterback.

Shaye Setter leaps to shut down a Linden run.

Arthur Draeger breaks a tackle on his 82-yard run.

Liberty Ranch faced their most challenging opponent Friday night so far this season. The Hawks were prepared and persevered till the end and came away with the win 48-28.

Head Coach Warren Schroeder says it was a learning experience. “This game was a good test for our players,” said Schroeder. “We made some mistakes, but they were things we can learn from and get better. I am proud of the progress we are making as we get ready for league play.”

Liberty was first to score when Cody Smith grabbed a 24-yard reception to get the Hawks close to the goal, then quarterback Kymani Fenika ran it in for a touchdown with 9:37 left in the first quarter.

A minute later, Linden was able to break free on a pass to the right and scored, making the score Liberty 6, Linden 7. It would be the last time Linden scored in the first quarter.

Escape artist Arthur Draeger was handed the ball and broke free of no less than three tackles and ran 82 yards for a touchdown. The extra point was good, making the score 13-7, with 8:08 left in the first quarter.

Drager grabbed six tackles and 234 total yards that night. “It was good to see how this group would react to adversity,” said Draeger. “We reacted very well and I could not be more proud of this team.”

Linden gave up possession and Liberty Ranch took advantage when Armando Tapia caught a nice pass and ran to the 10-yard line. Fenika kept the ball and ran it in with 2:13 left in the first quarter. Liberty 20, Linden 7.

Linden was unable to move the ball forward once again and their punt was blocked, and the Hawks took over the ball on Linden’s 19-yard line with 50 seconds left in the first quarter.

Liberty is not able to catch the ball in the end zone on the fourth down, so Linden takes over again, but can’t move the ball once again.

After a few turnovers, Linden was able to score again with 2:40 left in the first half.

Liberty wasn’t done and Fenika throws a huge 50-yard reception to Tapia who ran it all the way down to the 10-yard line. Draeger runs around the line and finds the end zone, leaving the score Liberty 24, Linden 14 at the half.

On the second play after the kickoff, Linden caught a 71-yard pass and ran it into the end zone, leaving the score 27-21.

Liberty worked their way back into Linden territory and on a quarterback keeper busting through the Linden line, Fenika almost trips, but Gavin O’brien, in a joint effort, supports and pushes him into the end zone for another Hawk TD. The score is 34-21 with 8:08 left in the third quarter.

O’brien powers through the Linden line and grabs a touchdown of his own, making the score 41-24 with 2:31 left in the third quarter.

Linden scored one more time on a pass with 30 seconds left in the third quarter, making the score 41-28.

Fenika grabs his fourth touchdown in the fourth quarter and the score is 48-28.

Linden gets very close to a touchdown and throws the ball, and Drager intercepted it and the Hawks take over.

On the next play, Draeger runs the ball from the 10-yard line to the 44 and loses his helmet on the tackle. The Hawks get down to the 20-yard line with 30 seconds left, and take a knee to end the game with the score 48-28.

Liberty Ranch will play at Bear River this Friday.