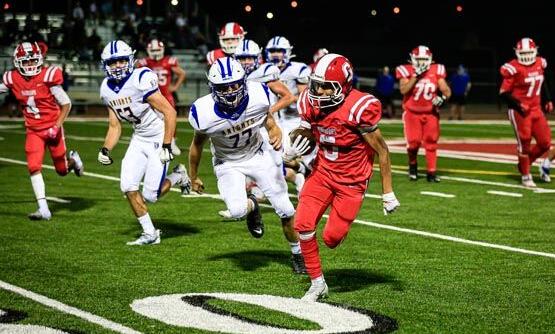 The Galt Warriors’ Sebastian Madrigal runs the ball in the season opener against Ripon Christian. 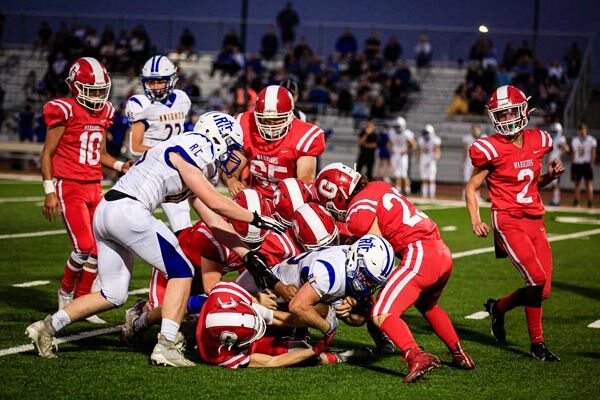 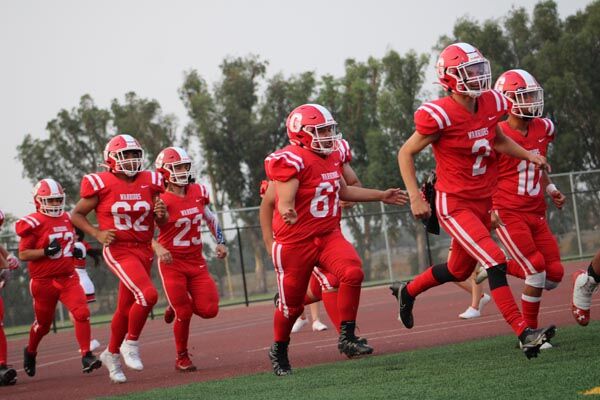 Galt High School football players enter the field to start a normal season after having only a mini season worth of games last year due to the pandemic.

The Galt Warriors’ Sebastian Madrigal runs the ball in the season opener against Ripon Christian.

Galt High School football players enter the field to start a normal season after having only a mini season worth of games last year due to the pandemic.

A game that was a nail-biter in the third quarter and that had potential to match that same level of scoring in the fourth, the Galt Warriors’ football season opener provided fans with a dramatic second half against Ripon Christian at Erv Hatzenbuhler Field/Warrior Stadium Aug. 20.

Coming off of a touchdown at the end of the second quarter, the Warriors scored again in the third quarter when Jeremy Freitas scored on a 95-yard touchdown run, giving the Warriors their first lead of the game.

A missed scoring opportunity sandwiched between two Ripon Christian touchdowns turned into a sudden, nine-point deficit for the Warriors, however, and it was a hole from which they couldn’t climb out.

The loss put the Warriors at 0-1 heading into their next game against Summerville, which will take place Friday, Aug. 27 on the road.

The Warriors had trailed 7-6 at halftime and forced the Knights to turn the ball over on downs in the third quarter at Galt’s eight-yard line. The Warriors immediately took advantage of their possession, helping Jeremy Freitas find an open path down the field for a 95-yard touchdown. The Knights blocked the Warriors’ two-point conversion attempt, leaving Galt with a 12-7 score.

Ripon Christian answered with its next possession, as quarterback Trey Fasani scored on a one-yard run with 1:40 left to take the lead after the PAT kick at 14-12.

The Warriors entered the red zone in the resulting possession but couldn’t score, leaving the Knights with a chance to build on their lead in the fourth quarter.

They did exactly that, as Micah De Jong scored with 5:17 remaining to give his team the 21-12 lead.

While they still had plenty of time, the Warriors’ chances of catching the Knights grew less plausible when Jay Hoekstra recovered a Galt fumble with 4:15 left.

The Warriors ended up with the ball within the final 44 seconds after a Knight turnover, but came up empty despite their fervent efforts.

The Knights scored in the first quarter on a reception by Griffin Deabreu and recovered a Galt fumble less than a minute later to keep the ball out of Galt’s hands through the end of the quarter.

The Warriors set up their first scoring drive with a defensive play of their own when Sebastian Madrigal intercepted the ball with 3:25 left in the half.

Humphreys later scored on a touchdown reception on a pass by Erman with 1:21 left to come within 7-6.

Despite the loss, the Warriors showed promise with multiple clutch plays against the Knights from both their new and returning players from last season, including Levi Humphreys, Freitas and quarterback Cole Erman.

The Warriors will play at Summerville High School Friday at 7:30 p.m.